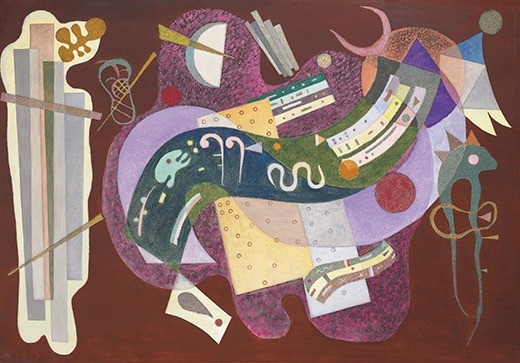 A painting by Wassily Kandinsky returns to the market after more than 50 years at Christie’s Impressionist and Modern evening auction in New York on 16 November. Rigide et courbé (rigid and bent) (1935), which the artist painted in Paris two years after he was forced into exile from Germany, is the auction’s top lot and is estimated at $18-25m with a guarantee.

The painting was first bought in 1936 by Solomon Guggenheim directly from the artist and was included in eight exhibitions through 1949 in New York, Philadelphia, Pittsburgh, Chicago, Baltimore and Charleston. When the Guggenheim Museum was looking to raise funds in 1964, the picture was among a group of 50 by the artist sold at Sotheby’s in London, raising an uproar in the New York art world. (A letter to the editor of the New York Times called it “shocking, grievous news”.) The painting has remained with the same American family ever since.

Rigide et courbé is noteworthy in part for its scale. At 45 by 63.5 inches, it “ranks alongside the biggest pictures of his last years,” says Conor Jordan, the deputy chairman of Impressionist and Modern Art at Christie’s. A smaller work by Kandinsky (38.5 by 27.5 inches) titled Studie für Improvisation 8 (1909) sold at Christie’s in New York in 2012 for $23m, which is the artist’s auction record.

The picture, notably, includes sand. “He may have been inspired by Georges Braque, who often used sand, particularly in paintings from the 1920s and 1930s,” Jordan says, although Bauhaus artists like Kandinsky were always experimenting with new techniques.

Although the work is abstract, there are some identifiable forms, some of which speak to the period in which it was made. At the left, a group of bound vertical shapes may allude to the fascio, a bundle of rods with an axe that was used as a Fascist symbol. At the right, a figure with horns may allude to the myth of the rape of Europa.