Sotheby’s announced that masterworks on paper from the Diamonstein-Spielvogel Collection will lead the November sales of Impressionist & Modern and Contemporary Art in New York.

Drawings and works on paper are the most spontaneous and essential of all artworks, often underpinning everything that an artist subsequently applies to other media. And yet, it is extremely rare for collectors to engage so totally with the creative process by focusing their attention on this medium. Dr. Barbaralee Diamonstein-Spielvogel and Ambassador Carl Spielvogel have meticulously built an unprecedented collection, which offers unique insight into the creative spirit and personality of an impressive array of artists working across the 20th and 21st centuries.

From intensely-worked pastels, watercolors and gouaches to the most elemental pen and ink or charcoal drawings, the Diamonstein-Spielvogel Collection celebrates the primacy of works on paper, with a strict emphasis on the highest quality and rarity throughout. Together, these works highlight the diverse contributions made to the medium by artists ranging from Edgar Degas, Henri Matisse, Georges Braque and Joan Miró* to Jackson Pollock, Barnett Newman, Mark Rothko, Cy Twombly, Roy Lichtenstein and Lucian Freud. The collection is distinguished further by the incredible depth in which the Spielvogels collected a number of artists: seven works by Jasper Johns capture many of his signature images and techniques such as the American flag and numbers, while five pieces bookend Pablo Picasso’s career from 1901 to 1971 and depict multiple of his muses.

Full proceeds from the sale of works from the Diamonstein-Spielvogel Collection will benefit a charitable foundation of the same name, which was established to support causes that the Spielvogels have actively championed throughout their lives, including: science & medicine, educational reform & innovation, and cultural projects.

A significant selection of highlights from the collection will travel the world this fall, including exhibitions in Hong Kong, London, Paris, Los Angeles, San Francisco and Chicago. The full collection will be on public view for the first time in Sotheby’s New York galleries in an extended and dedicated exhibition opening 27 October – a must-see event for collectors and connoisseurs during this marquee moment for the global art market.

Dr. Barbaralee Diamonstein-Spielvogel commented: “Works on paper are the most profound expression of the artist’s intent, I believe. There are many parallels between the visual and literary arts, well beyond their shared use of the medium – both pursue the elusive, and require discipline and astute thinking in order to successfully articulate the author’s intent. We have enjoyed years of undiluted pleasure living with this collection because of the singular artistic abilities of the artists represented. Consistent with our long-held view that we are, each of us, temporary custodians of all we possess, we must treat stewardship with great care. It is our hope that future collectors will experience genuine delight from the works presented, and that through the Diamonstein Spielvogel Foundation, the artists represented will derive great satisfaction from the fact that many others will benefit for many years to come from the future exchange of ideas, staunch adherence to intellectual and cultural excellence, and a healthy disregard for the impossible.”

Lisa Dennison, Chairman of Sotheby’s Americas, said: “For nearly five years, Sotheby’s has been in discussion with Barbaralee and Carl about the future of their collection and their philanthropic intentions. Therefore, it is now a great privilege to work on their behalf to fulfill their goals and to present masterworks on paper from the Diamonstein-Spielvogel Collection at Sotheby’s. As a writer and scholar at heart, who has been in dialogue for decades with many of the artists represented, it is fitting that Barbaralee is so drawn to paper as an artifact of process. The true diversity of drawing is illustrated throughout the collection, with each artist approaching their work with different objections – whether working through details for larger compositions, making studies for paintings, or creating complete compositions in their own right. The consistent high quality across the collection is unparalleled, which is a testament to Barbaralee and Carl’s passion, scholarship and sophistication.”

DR. BARBARALEE DIAMONSTEIN-SPIELVOGEL & AMBASSADOR CARL SPIELVOGEL
The quality of the Diamonstein-Spielvogel Collection and the charitable plans for all its proceeds are natural extensions of two lives devoted to scholarship, service and professional success.

Throughout her career, Dr. Barbaralee Diamonstein-Spielvogel has served as a leading voice on some of the defining urban issues of our time, including the preservation of the historic built environment of our country. She serves as a model for civic and cultural engagement, having demonstrated unparalleled commitment to the arts, architecture, design and public policy through numerous roles including: White House Staff Assistant, the first Director of Cultural Affairs in New York City, the first woman Vice Chair of the U.S. Commission of Fine Arts in its 109-year history, the longest-serving New York City Landmarks Preservation Commissioner, the current Chair of the New York State Council on the Arts, and Commissioner of the American Battle Monuments Commission. A steadfast champion of many cultural and historical organizations, she has received countless awards, holds four honorary doctoral degrees, has authored 23 books, and served as the curator of eight international traveling museum exhibitions.

Ambassador Carl Spielvogel is a board member of iconic institutions including the Metropolitan Museum of Art (chair of the widely-emulated Business Committee), Lincoln Center for the Performing Arts, the Philharmonic Symphony Society of New York, and the Asia Society. His remarkable career includes Founder/Chairman/CEO of the advertising firm of Backer & Spielvogel, which became Backer Spielvogel Bates Worldwide, one of the world’s largest marketing and advertising communications companies, operating in 55 countries. Currently, he is Chairman and CEO of Carl Spielvogel Associates, an international investment, management and marketing company and serves on the board of Apollo Investment, Inc. Ambassador Spielvogel was a founding director of the U.S. Broadcasting Board of Governors, named to the position in 1995 by President William J. Clinton, who also appointed him Ambassador to the Slovak Republic in 1999. In 2008, Ambassador Spielvogel was named to the board of trustees and Executive Committee of the State University of New York (SUNY) – the largest state university system in the United States. 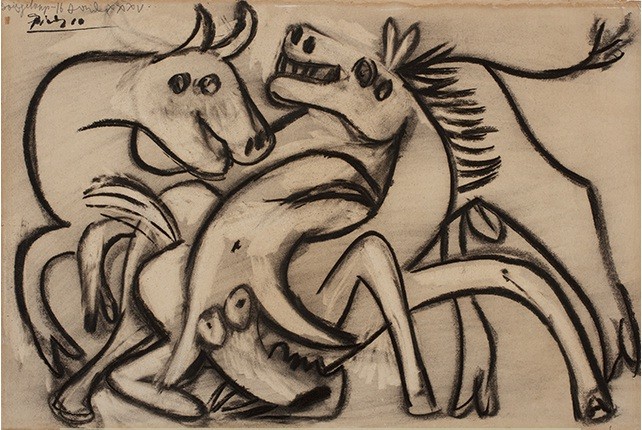 Picasso bookend his professional career from 1901 to 1971. The group charts Picasso’s artistic evolution and records many of his most celebrated muses, including Marie-Thérèse Walter, Jacqueline Roque, and one of the strongest line drawings of Dora Maar to appear on the market in recent years. Women and Horses (Combat de taureau et cheval) leads the selection – a scene featuring Marie-Thérèse that captures the rising tension of a pre-war Europe, and foreshadows the compositional arrangement that would manifest in his singular masterpiece, Guernica two years later.

René Magritte
La Réponse imprévu
1963 or 1964
Gouache on paper
Estimate $2/3 million
René Magritte’s entrancing La réponse imprévu is a masterful celebration of the medium in which the artist achieves a level of detail only available to him on paper, done in an intimate scale that compounds these striking characteristics. The work employs one of Magritte’s most enigmatic tropes of the door, capturing the ‘treachery of images’ for which the artist is well-known: here the door fails to serve its purpose of closing off the space, opening to a world that cannot quite be seen or understood. La réponse imprévu relates to an important oil painting of the same name in the collection of the Musée Royaux des Beaux-Arts de Belgique, Brussels.

Jackson Pollock
Untitled
1951
Black and colored inks on mulberry paper
Estimate $3/4 million
Notable for the density of its soaked color in vibrant ambers, yellows, and rich blacks, Untitled from 1951 captures Jackson Pollock working through a major stylistic development. The pooled inks ricochet across the surface of the mulberry paper with extraordinary dynamism, with the poured fields of explosive color foreshadowing canvases like Blue Poles and Convergence that the artist would complete the following year. Untitled is notable for its distinguished exhibition history, having been included in multiple seminal exhibitions on the artist’s work at The Museum of Modern Art, the Tate Gallery, the Philadelphia Museum of Art, the Stedelijk Museum and the Guggenheim Museum.

Jasper Johns
Numbers
2006
Ink and crayon on Japanese paper mounted on Torinoko paper
Estimate $2.5/3.5 million
The collection offers an outstanding group of seven works on paper by Jasper Johns. This assembly is led by Numbers, a rare large-scale articulation of one of Johns’s most iconic motifs, executed in his favored greyscale palette and boasting a luxuriantly-textured surface. Many of Johns’s most significant images and subjects are represented across the collection, altogether providing an enriching outlook into the artist’s complex approach to this critical medium. This important grouping is being presented at a momentous time for the artist, following the recent publication of his catalogue raisonné and the opening of the comprehensive survey exhibition Jasper Johns: ‘Something Resembling Truth’ at the Royal Academy of Arts in London (to travel to the Broad in Los Angeles in 2018).

Mark Rothko
Untitled
1968
Acrylic on paper mounted on canvas
Estimate $5/7 million
Mark Rothko’s Untitled is a rare and ethereal example of the artist’s mature work, created just two years prior to his tragic death in 1970. Executed in a vibrant palette of blues and ambers, the work evokes all of the hallmarks of Rothko’s most iconic vernacular, bearing three distinct zones of sumptuous color and richly-expressive brushwork. This work notably was selected for exhibition in the artist’s seminal 1998 retrospective at the National Gallery of Art in Washington, D.C.

Roy Lichtenstein
Study for ‘The White Tree’
1979
Pencil and colored pencil on paper
$450,000/650,000
Five exceptional drawings by Roy Lichtenstein exemplify the importance of paper as a medium for study. Each provides a unique outlook on the artist’s process, seeing him develop compositions that he would then execute on a larger scale. The group is led by Study for ‘The White Tree’ (1979), an arresting and complex example of Lichtenstein’s appropriation of the Der Blaue Reiter landscapes. Other works in the collection similarly explore Lichtenstein’s repeated citations of art history, from Surrealism through to German Expressionism.