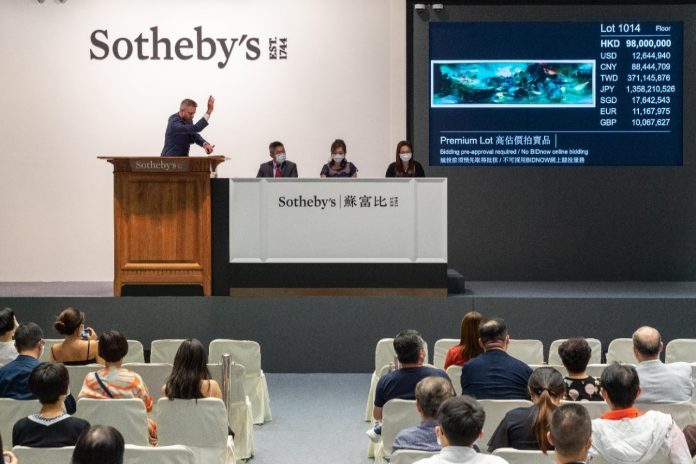 The evening auction of contemporary art at Sotheby’s auction house was held on July 8, 2020, in Hong Kong. It showed the second-highest total result for the entire history of the auction house. It brought the organizers $ 107 million.

Four lots exceeded an important mark of $ 12.9 million immediately. In total, during the auction, 6 individual auction records were set for different authors.

Top auction lot was the work Quatre nus by Sino-French artist Sanyu. It was sold for $ 33.3 million during the fight of four bidders. It was announced for sale in Autumn. The work was sold more than one and a half times more expensive than the starting price of 160 million HKD (about $ 20 million).

One of the most popular authors of yesterday’s auction was Zao Wou-Ki . The works of this French artist of Chinese descent, a representative of the Paris School, who lived in Montparnasse, were sold at 100% for a total of $ 41 million.

Chu The-Chen’s scroll titled La Lune broke a record for the artist’s work of calligraphy, which brought in HKD 4.7 million, besting its pre-sale estimate of HKD 300,000 to $600,000.

Female Chinese painter Guan Zilan’s realized a record price with the sale of Portrait of a Girl from the 1930s. The work of art was held in just one private collection before it came to the market.

Commenting on this result, Vinci Chang, head of Sotheby’s Asian Department of Contemporary Art, said that the brilliant result of the auction testifies to the constant appetite of the market for high-level works. Customers who were not able to join the auction in person enthusiastically traded on the phone. This led to an exceptionally strong result of these trades, as well as to several outstanding individual records.

He also noted that the organizers of the auction were delighted with the results of the sale of all seven works of Zao Wou-Ki, an artist whose roots and origin they are proud of.

Helen - August 10, 2020 0
After the fraudulent dealer is detained by the FBI, the court decides the ownership of the works he sold twice. A few weeks after...