Sotheby’s Hong Kong Important Watches Autumn Sale 2017 will take place on 2 October at the Hong Kong Convention and Exhibition Centre. Leading the sale is an Extremely Fine and Important Sapphire Tonneau-Form Skeletonized Tourbillon Wristwatch RM56-02 by Richard Mille, alongside a strong and diverse line-up of vintage masterpieces and independent innovations across the spectrum.

Jessie Kang, Head of Watches Department, Asia, comments, “We are very excited to be offering a Richard Mille RM56-02, the light and possibly the most “transparent” watch in the world, and Patek Philippe 5002, arguably one of the most complicated watches of its time. We are especially proud of the broadened offering of independent brands in the line-up for this year’s sale. Together with celebrated power brands such as the aforementioned Richard Mille and the classic Patek Philippe, this wide spectrum of artisanal and ultra-exclusive independent creations such as MB & F and Phillip Dufour, serve as a reflection of the recent changes in the watch industry, in which independent watches are starting to draw significant market interest due to impeccable craftsmanship, bold creativity and distinguished uniqueness.” 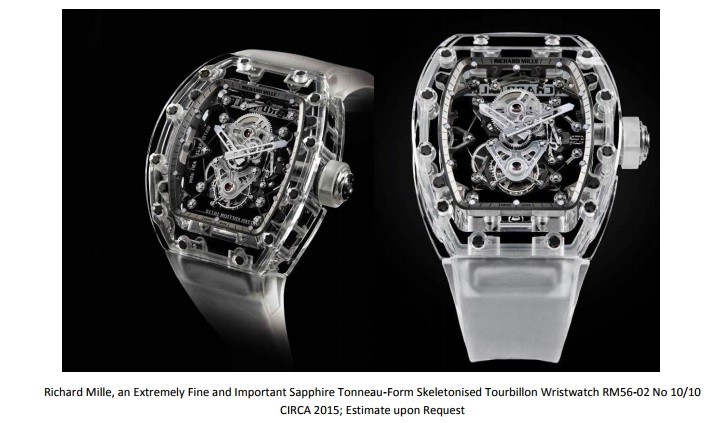 With only 10 pieces ever produced, this tourbillon wristwatch by Richard Mille is a standing 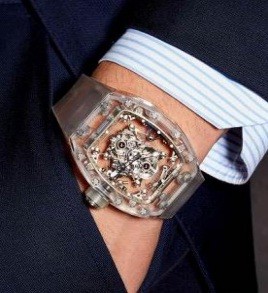 testament to ideals of craftsmanship and prestige. Created for the Hong Kong Watches & Wonder event in 2015, the magnificent RM56-02 Sapphire Tourbillon is the watchmaking milestone for its weightlessness and transparency. Its design is predicated on two innovative breakthroughs, the first being the cable and pulley system that suspends the movement from the sapphire case – taken from their RM 27-01 Nadal watch; and the second being the unparalleled usage of sapphire in creating transparent components. Never before had such a complex case design for such an intricate movement been manufactured in pure sapphire.

The grade 5 titanium baseplate is suspended by a system of four pulleys on the case, with six pulleys on the baseplate itself, which is all held together with a 0.35mm braided cable. The RM56-02 model is cut and milled from solid blocks of sapphire, including the front bezel, case band and back bezel, rendering it scratch resistant. With a production lead time of 40 days in addition to a required 400 hours just for the sapphire bridge, this wristwatch is a true testament to Richard Mille’s commitment to perfection.

Widely accepted as the most important wristwatch manufactured this century, the Sky Moon Tourbillon Ref.5002R is Patek Philippe’s most complicated wristwatch to date and its first creation that features a double dial. It is reported that only 2 examples are manufactured each year. 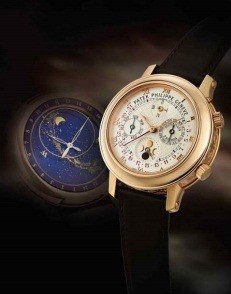 Bearing twelve complications on two dials, this mechanical wonder was inspired by the Star Calibre 2000 pocket watch featuring a complex sky chart, which Patek Philippe miniaturised it to fit into a wristwatch. Such is the complexity of the 686-part movement, including a tourbillon adjusted to run within a high precision rate of -2/+1 seconds maximum daily variation. With astronomical indications including a retrograde perpetual calendar, quarter moon phases, the meridian passage of Sirius (the brightest star in the sky), the age and angular motion of the moon plus sidereal time and a celestial chart of the northern hemisphere and a horizon ellipse, the 5002 exemplifies the impact astronomy has made on the advancement of human civilisation.

A distinguished student of Gabriel Locatelli, Philippe Dufour has created some of the most extraordinary repeaters of Audemars Piguet and Jaeger-LeCoultre. In 2013, Dufour was awarded the Gran Prix d’Horlogerie de Genève Special Jury Prize, a testament to his contribution to the art of horology. While he is known to make each timepiece by hand with tools which date back to the 1930s, it is the intrinsic element of simplicity found in his designs which would immortalise his legacy. With a case diameter of 37mm in white gold, the present lot features a solid silver dial that has a guilloche centerfield, applied Arabic and dagger numerals and subsidiary seconds. With a very limited production, the model is 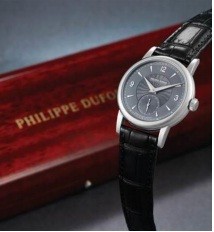 a rare find on the market.

Kari Voutilainen A Fine and Rare White Gold Rectangular Wristwatch with Regulator Dial Chronomètre 27 Circa 2008 Est. HK$500,000–700,000/US$65,000–90,000
The Chronomètre 27, named for the Calibre 27 it houses, is Kari Voutilainen’s second observatory watch offering that possesses exceptional accuracy in all the important technical areas of movement functionality. This model’s mean accuracy of only tenths of a second per day under test conditions is a rare feat even for 21st century mechanical watchmaking. Such watches are traditionally never available for sale to the public as they are originally created for timing trials, and the sheer pursuit of absolute precision. 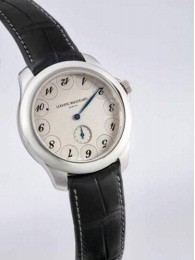 One of a limited 12 pieces, the present lot is an elegantly crafted timepiece that embodies Ballouard’s experience acquired from working at brands such as F.P. Journe and Franck Muller. Complementing the refined simplicity of the timepiece, the watch focuses on the hour indicators which are placed in an upside-down position. Each is placed on a small disc that rotates and the “active” hour, which coincides to the right time, is flipped around to be right side up.