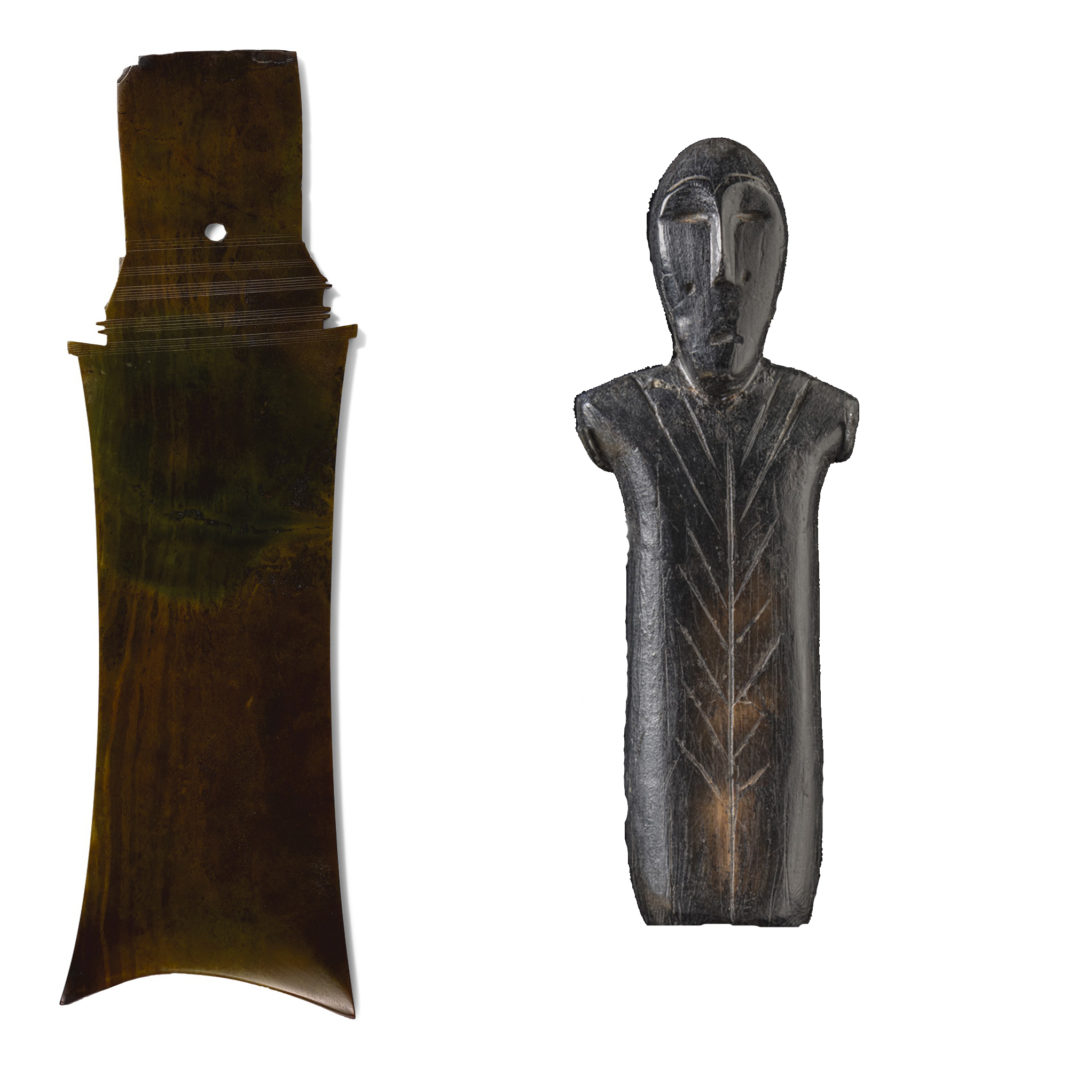 Sotheby’s Hong Kong will present Curiosity IV on 2 April at the Hong Kong Convention and Exhibition Centre. The fourth instalment of a very successful sale series, our enthralling cabinet of curiosities encompasses material from the Cretaceous period 70 million years ago to the present, from civilisations and cultures that once flourished and have now vanished, from the Okvik civilisation in the Bering Sea to Egypt’s new Kingdom, from the Olmec in Mexico to Kamakura Japan. The sale offers a total of 114 lots estimated in excess of HK$62 million / US$7.9 million.

Nicolas Chow, Chairman, Sotheby’s Asia, International Head and Chairman, Chinese Works of Art, says, “The Curiosity sale, in its fourth instalment, has become a fixture of our yearly sale calendar and it remains the principal platform where we introduce new fields of collecting to our Asian audience from natural history and tribal art to European sculpture, all juxtaposed with Chinese art. It is in essence a cross between the Chinese scholar’s studio and the western cabinet of curiosities.”

A FINE AND RARE ELEPHANT BIRD EGG 17TH CENTURY OR EARLIER 30.5 CM, 12 IN. Est. HK$350,000-550,000 / US$44,800-70,500
The egg of the elephant bird is the largest egg ever known, outcompeting any known dinosaur eggs. Elephant bird (Aepyornis maximus), was reputedly a name coined by the great explorer Marco Polo. It was believed that the bird, reminiscent of a massive ostrich, stood over 10 feet tall and was so enormous that it could carry off an elephant. The elephant bird, now extinct, was active in the south of the island of Madagascar in the Spiny Forest where they fed on the trees. Their shells were highly prized by the Madagascans, they have been used both practically as containers and treasured as prestige collectables passed down from generations to generations. In the nineteenth century during the European expeditions to Madagascar, these rare eggs of curiosity were discovered. Filled with awe, several of these were brought back to France and England, most of which are now housed in public museums. The present egg is one of a few which remain in private hands.

A GOGOTTE OLIGOCENE (30 MILLION YEARS OLD) FONTAINEBLEAU, FRANCE W. 115.5 CM, 45½ IN. Est. HK$180,000-220,000 / US$ 23,100-28,200
A gogotte is a millions-of-years old naturally shaped mineral rarity consisting of tiny quartz fragments held together by calcium carbonate. As an underground water stream slowly filters through sand, these tears of stone are frozen upside down in eternal flight. The most prized examples of gogottes are found in Fontainebleau, France, where they have been protected in a sandy basin for over 30 million years. Known to have inspired artists from the Surrealist Art movement, including Jean Arp, these bizarre sandstone formations are comparable to the most beautiful of modern sculpture. On view at present day in the Versailles garden, gogottes were commissioned by Louis XIV of France, known as the Sun King, to be excavated for his gardens.

A CARVED BOXWOOD MEMENTO MORI SKELETON SOUTHERN GERMANY, 17TH CENTURY 26.2 CM, 10¼ IN. Est. HK$400,000-600,000 / US$ 51,500-77,000
Representations of memento mori (‘Remember death’) motifs – reminders of the fleetingness of life – gained currency in the Renaissance, particularly in Reformation-led Germany. Acting as moral guardians with connotations of sin, decay and the afterlife, such objects were valued equally as curiosities, satisfying the Renaissance obsession with human anatomy and the grotesque. As they symbolise the transience of human life, they were also known as ‘Vanitas’ from the reference in the Book of Ecclesiastes (1.2) to “vanity of vanities, all is vanities.”

A SUPERBLY CARVED AND EXTREMELY RARE LIMESTONE FRAGMENTARY FIGURE OF A BODHISATTVA TANG DYNASTY 63.5 CM, 25 IN. Est. HK$8,000,000-12,000,000 / US$1,030,000-1,540,000
This sensual image of a Bodhisattva, so gracefully carved with deeply voluptuous movement, is an outstanding legacy of the high period of the Tang dynasty (618-907), when China’s sculptural tradition reached its most mature phase. The modelling of the aristocratic male figure is articulated with vivid realism, the dignified poise of the Bodhisattva endowed with the uttermost spirituality. In contrast to the more sinicised treatment of the human form in the Northern Qi (550-577) and Sui (581-607) dynasties, masterpieces of the high Tang, of which this is such a superb example, exhibit a deep level of influence from the artistic style of the Indian Gupta Empire (320-647), itself embued with resonances of the Hellenistic tradition.

A HIGHLY IMPORTANT AND MAGNIFICENT RHINOCEROS HORN ‘DRAGON’ VESSEL HOLY ROMAN EMPIRE, LATE 16TH – EARLY 17TH CENTURY 54.2 CM, 21⅜ IN. Est. HK$8,000,000-9,000,000 / US$1,030,000-1,160,000
This extraordinary rhinoceros horn dragon vessel, superbly carved as a mighty beast poised and braced for attack, is a highly important relic of the European Renaissance. Emanating from the midst of the Holy Roman Empire, it would have been a truly opulent and exceptionally luxurious item created under royal patronage, or possibly commissioned for the ‘cabinet d’amateur’ of a great collector. It is extremely rare, with no other comparable example known.

A MASSIVE GIRAFFE SKULL, GIRAFFA CAMELOPARDALIS SOUTH AFRICA W. 69 CM, 27⅛ IN. Est. HK$45,000-55,000 / US$ 5,800-7,100
Well-built with a pair of ossicones of relatively large size, the current skull probably belonged to a male giraffe. These prominent rod-like structures are formed from ossified cartilages, and may play a role in male combats and body thermoregulation. As giraffes mature, calcium deposits grow on their cranium and develop into further horn-like structures protruding from their foreheads (and sometimes rear of their skull), as seen on the present piece. The natural erosion on the surface of the skull suggested that it was probably a bush find.

A BLACK LACQUEREDIRON ZUNARI USHIRODATE KABUTO MID–EDO PERIOD, 17TH – 18TH CENTURY H. 37 CM, USHIRODATE W. 48 CM. Est. HK$40,000-60,000 / US$ 5,200-7,700
The use of matchlock guns in combat battle had a fundamental influence on military strategy in Japan. Generals now had to stand behind their troops in combat in order not to be shot, yet had to lead complex movements on the battlefield. They had therefore to be identified by strong visual cues, such as the oversized horn formed cresting as found on this helmet. Arms and armours became more ornamental rather than of actual use in a pacified Japan during the latter part of the Edo period in the eighteenth century and before the arising of new tensions in the society, concomitant with the opening of the country to the West from the mid-nineteenth century. Therefore it is likely that the present helmet, with its delicate lacquered surface and large cresting, would have been intended for display or representation rather than for actual use in combat