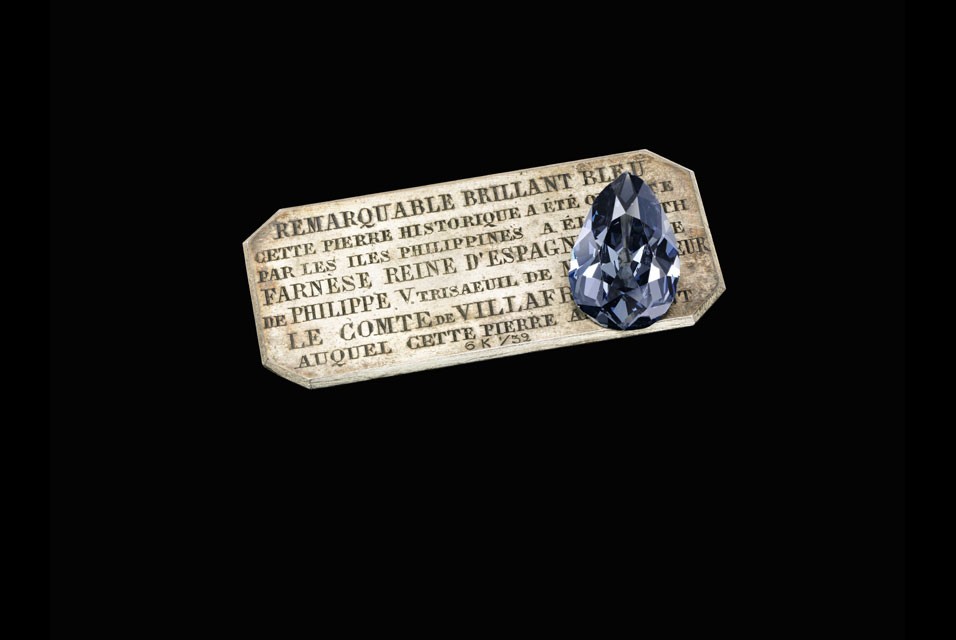 One of the foremost historic diamonds – The Farnese Blue – will appear on the market for the first time in history this spring, after having remained in the same family for over three centuries. Given to Elisabeth Farnese, Queen of Spain (1692-1766), the legendary diamond has subsequently passed down through four of the most important royal families in Europe: Spain, France, Italy and Austria. Witness to 300 years of European history, from the aftermath of the Spanish succession War to the fall of the Habsburg Empire, the diamond has travelled across the continent for centuries. And all this time, it was kept secretly in a royal casket. Excepting close relatives, and of course the family jewellers, no one knew of its existence. The 6.16-carat pear shaped blue diamond will be offered in Sotheby’s sale of Magnificent Jewels and Noble Jewels in Geneva on 15 May 2018 with an estimate of CHF 3.5 – 5 million (US$ 3.7 – 5.3 million).

David Bennett, Chairman of Sotheby’s International Jewellery Division and Co-Chairman of Sotheby’s Switzerland, said: “It is difficult to put into words the excitement of holding between thumb and forefinger a gem discovered centuries ago, knowing it originated in the legendary Golconda diamond mines of India. This stone has witnessed 300 years of European history, and in colour is reminiscent of historic Golconda blue gems such as the Hope diamond.”

Dr Philipp Herzog von Württemberg, Chairman of Sotheby’s Europe and Managing Director of Germany added: “With its incredible pedigree, the Farnese Blue ranks among the most important historic diamonds in the world. From the first minute I saw the stone, I could not resist its magic and as such it is a huge privilege to have been entrusted with this sale.”

The diamond was originally given to Elisabeth Farnese, Queen of Spain and descendant of Pope Paul III, following her wedding to King Philip V of Spain, grandson of Louis XIV, King of France. The wedding was celebrated in Parma in 1714, immediately after the War of the Spanish succession, during which Spain’s finances had been gravely depleted. To assemble a suitable dowry for the new queen, the Spanish government sent word to the governors of its colonies from Mexico to the East Indies, ordering them to send wedding presents to Madrid. A year later, in August 1715, the Golden Fleet sailed from Cuba ; 12 ships carrying a fortune in gold bullion and casket of enormous emeralds. Unfortunately, after 10 days of sailing, a hurricane destroyed most of the fleet in the gulf of Florida. Only one ship managed to escape. The story goes that the emeralds were lost in one of the sunken ships. But one diamond found its way to Spain: a pear-shaped blue diamond, gifted to the new Spanish queen by the governor of the Philippine Islands.

Blue has often been identified as the colour of the Kings and in the 17 and 18th centuries, blue diamonds were viewed as the ultimate royal gift. Like the famous Hope and Wittelsbach diamonds, the Farnese Blue was certainly found in the famed Golconda mines of India, which was the sole source of diamonds until the discoveries in Brazil in the 1720s.

At Home With Sotheby’s Designers

Léo Caillard Presented the Sculptures ‘Heroes of Stone’ in The Louvre