Home Auctions Zeng Fanzhi Cultivates His Collector Base, Especially One 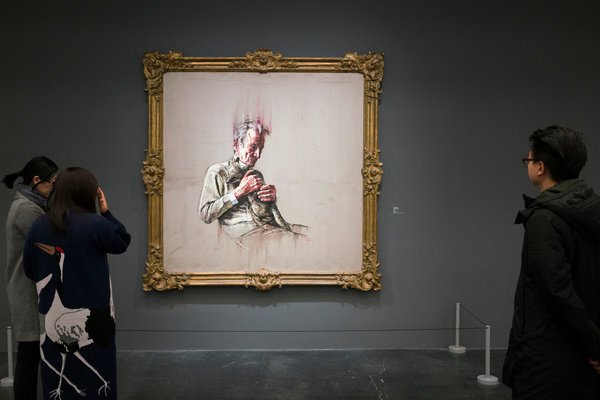 Zeng Fanzhi is very influential artist. He’s also an important tastemaker in China with a powerful posse of collectors. But how did he get such influence? The New York Times’s Jane Perlez spent some time with him to write this revealing profile:

How has he managed to stay at the top? “You might say I am very cunning,” he said, a small cheeky smile across his broad, smooth face. “I only sell my paintings to those who really like them. Then those people will help me promote my works.”

It is this approach of cultivating collectors who cherish his art, combined with indisputable painting skills, that has propelled him to the fore, said Philip Tinari, the director of the Ullens Center.

“China needs a great artist, and the way he has gone about it is very intelligent,” Mr. Tinari said. “He understands the milieu his works circulate in, the actual collectors’ homes, cultural institutions and galleries. He invites these key people to be part of his success, and as he achieves higher degrees of validation it’s something everyone feels good about.”

That cultivation isn’t confined to Chinese collectors. As with so much Contemporary art, one important tastemaker who is heavily invested in the Zeng market is Christie’s owner Francois Pinault:

The fact that Mr. Pinault owns one of his favorite paintings, a portrait of the artist Lucian Freud, and displays it so prominently in his Belgravia home in London in a $100,000 18th-century frame, seems to give Mr. Zeng the most pleasure.

“I asked him many times to borrow the Lucian Freud for one of my shows, and he always said no,” Mr. Zeng said. As a gesture of their friendship — they hang out together in Europe, Mr. Zeng said — Mr. Pinault agreed to send it to Beijing for the show.

There was a reason for the reluctance. Mr. Zeng said, “They had to close off the street in London and get a crane to take it out of his front window.”