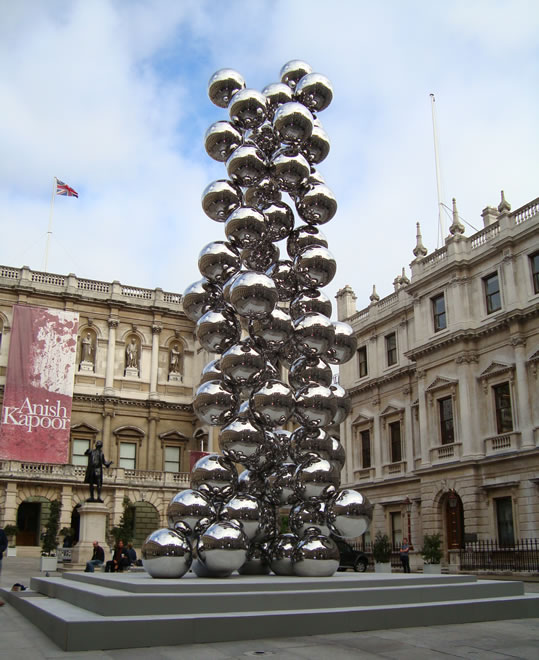 Considered one of the most important sculptors of his generation, Indian-British artist Anish Kapoor creates large-scale works that challenge the viewer and defy easy definition, resonating with a mythic sensibility. Taking inspiration from both Western and Indian cultural sources, Kapoor harnesses intense hues, perception-shifting mirrors, and haunting voids to draw the viewer into an experiential relationship with sculptural objects that seek to evoke a multiplicity of visual and imaginative possibilities.

Anish Kapoor has often asserted, ‘I have nothing to say.’ This statement may seem odd coming from an internationally renowned artist who, in addition to winning some of the world’s most prestigious art prizes—including the Premio Duemila for his representation of Britain at the 44th Venice Biennale and the Turner Prize in 1991— was knighted by Queen Elizabeth II in 2013 for services to visual arts. But by keeping silent on his work however, he allows for new and unforeseen meanings to develop. The roots of this self-effacing approach can be found in Kapoor’s culturally mixed background, inspired by both the Western art movements of the 1960s and Indian concepts such as Svayambhu (a Sanskrit term meaning that which is created of its own accord rather than the hand of man).

Born in Mumbai, India, in 1954, Anish Kapoor benefited from a diverse upbringing in the post-independence environment within India’s largest metropolis. His mother was the Iraqi-Jewish daughter of a cantor in a synagogue whose family had been part of the large Jewish community that had emigrated to Mumbai from Baghdad, and his father was a Hindu hydrographer in the Indian Navy. Kapoor’s early education encompassed both Indian and Western culture, and he subsequently travelled to Israel where he spent a couple of years living on a kibbutz with one of his brothers, abandoning his family’s expectation of becoming an engineer and instead realizing that he wanted to become an artist.

He moved to England in the early 1970s to attend art school, studying first at Hornsey College of Art and then completing his postgraduate studies at Chelsea School of Art, London. But it was during a trip back to India that things suddenly clicked into place for him. While there, he saw piles of bright hues of pigment that evoked a different approach to shape and colour, one that fit his leanings toward objects not defined by self-expression or artistic gesture. He returned to England and began his first major pigment series—1000 Names—features diverse forms of intense primary colours that hover somewhere between the biological and the architectural. While the title of the series makes a reference to the Hindu deity Vishnu, it also reveals the artist’s belief in the unresolved nature of the artwork, one that can take on a multitude of different meanings depending on the relationship between viewer and object.

Indeed the relationship with the viewer is paramount in Kapoor’s work; with the artist affirming: ‘We have two outstanding attributes—one is to believe, the other is to relate. Art engages the need to believe, great art in its overwhelming ability to be intimate wraps us in relation’. While Kapoor has said he wants to draw viewers into a moment of intimacy with his enigmatic sculptures, several of his most notable museum installations have taken this notion of wrapping to a monumental scale. At London’s Tate Modern in 2002, he built an immense work named ‘Marsyas’; composed of a PVC skin that stretched 150 meters across the vast space of Turbine Hall, it was so large that it could not fully be seen from any angle. More recently, his work ‘Leviathan’ filled the massive glass-roof-enclosed Grand Palais in Paris for the 2011 Monumenta art exhibition and allowing viewers to go inside the massive structure, enveloping them in the intense red glow of the giant PVC membrane.

Both of these sculptures were not only massive works of art, but also complicated feats of engineering, something Kapoor took to yet another level when he won the commission to create the monument for the 2012 Olympic Games in London. At 115 metres high, theArcelorMittal Orbit is the United Kingdom’s tallest sculpture, a twisting mass of red steel that is meant to evoke a delicate balance of stability and instability. As the artist explains, ‘It’s a long winding spiral: a folly that aspires to go even above the clouds and has something mythic about it.’ The mythic is an important component of Kapoor’s work; he believes that artworks are not simply individual acts of personal expression but vessels of collective mythologies.

Yet, if Kapoor has occasionally suffered the criticism that the scale of his works border on pure spectacle, his intention has always been to elicit a sense of the sublime and the realization that there exist things that lie beyond our grasp or understanding. He achieves this on a smaller scale as well, creating a number of works that deal with the notion of the void, another central theme in his work. An example of this is his piece ‘Descent into Limbo’. Initially the installation appears to be a black circle on the floor’s surface, but upon closer inspection, reveals itself to be an actual void in the floor filled with pure black pigment. This dark place, at once seductive and terrifying, is meant to call attention to an interior state and stimulate the imagination of the viewer; for Kapoor the void is a psychological space as well as a ‘potential space,’ one that remains unresolved and constantly shifting.

The ever-changing, uncertain state of the viewer perhaps finds its apotheosis in his most famous permanent public commission, ‘Cloud Gate’. Located in Chicago’s Millennium Park, and known locally as ‘the Bean’, ‘Cloud Gate’ seems to efface its massive heft, instead reflecting the environment around it and provide a constantly morphing reflection of those who approach it. Indeed, as curator Nicholas Baume has said, ‘The effect of Kapoor’s work is not so much to conjure illusion, but rather to manifest the abstract, fugitive possibilities of the real’. In a world that is becoming ever more overwhelming, artist Anish Kapoor reminds us of our ability to relate to the world around us and to imagine the manifold possibilities that can be found by embarking on voyages of discovery.