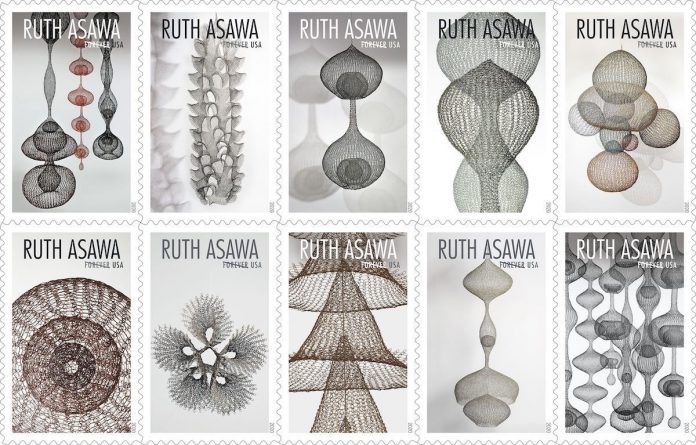 Soon you’ll be able to mail a letter to a friend—or realistically, pay a bill—with a hint of art history. The United States Postal Service announced this week that it’ll be releasing 10 stamps inspired by renowned sculptor Ruth Asawa. The neutral-toned collection contains mostly her bulbous hanging pieces that appear to swell and contract in vertical lines.

Born in 1926, Asawa was forced into a Japanese internment camp by the U.S. government with her family during World War II. She learned to draw during her detainment, before eventually attending Black Mountain College, where she studied with Josef Albers and began to delve into wire weaving and sculpture. Later in her career, Asawa described her looped artworks as “a woven mesh not unlike medieval mail. A continuous piece of wire, forms envelop inner forms, yet all forms are visible (transparent). The shadow will reveal an exact image of the object.”

The forthcoming stamps feature photographs by Dan Bradica and Laurence Cuneo, with the selvage image taken by Nat Farbman for a 1954-issue of Life. To see more of Asawa’s wire works before you pick up the postal packet, check out the Instagram account that her estate manages. (via Artsy)