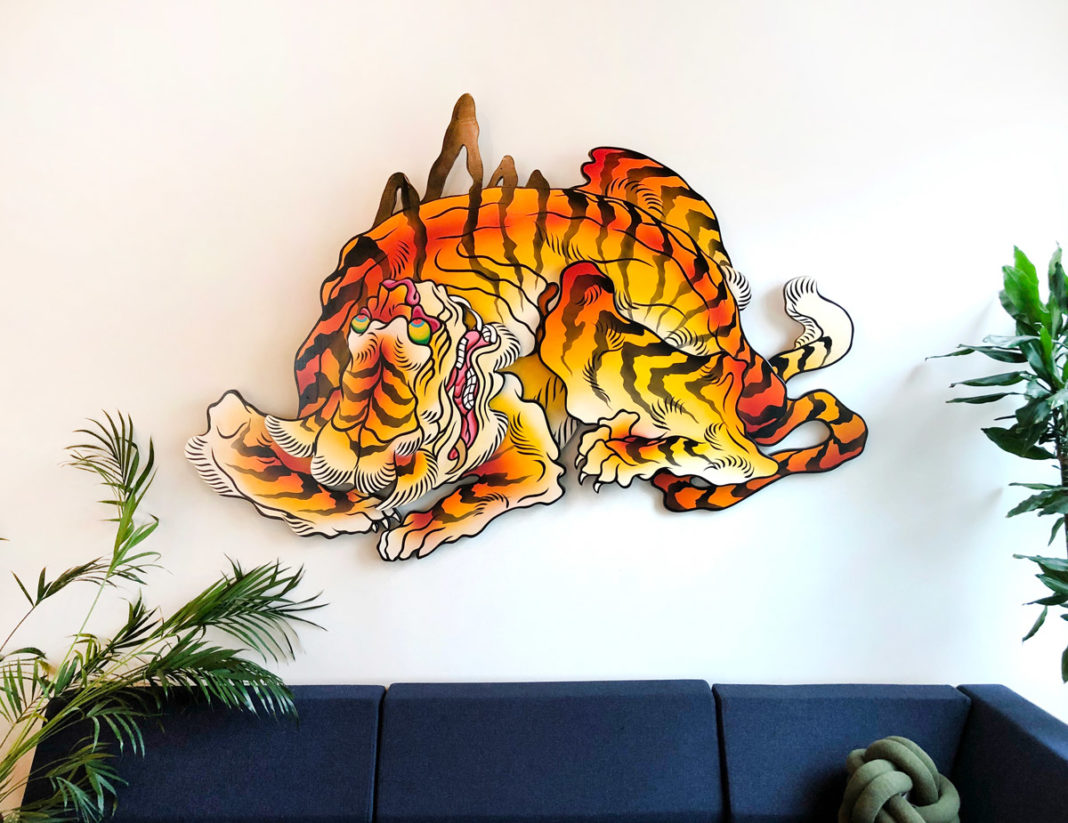 Boy Kong is a local artist from Apopka known for his festive murals, his bold use of line, and his whimsical, dynamic compositions. His style can be marked by striking color palettes and distorted, sometimes mangled, figures. Often the subject is a fantastic rendering of some imaginary animal in a writhing and flowing motion. More than just 2D Painting and murals, Boy Kong creates woodcut assemblies of his works, with shifting planes arranged in an aesthetic that suits his work very appropriately. 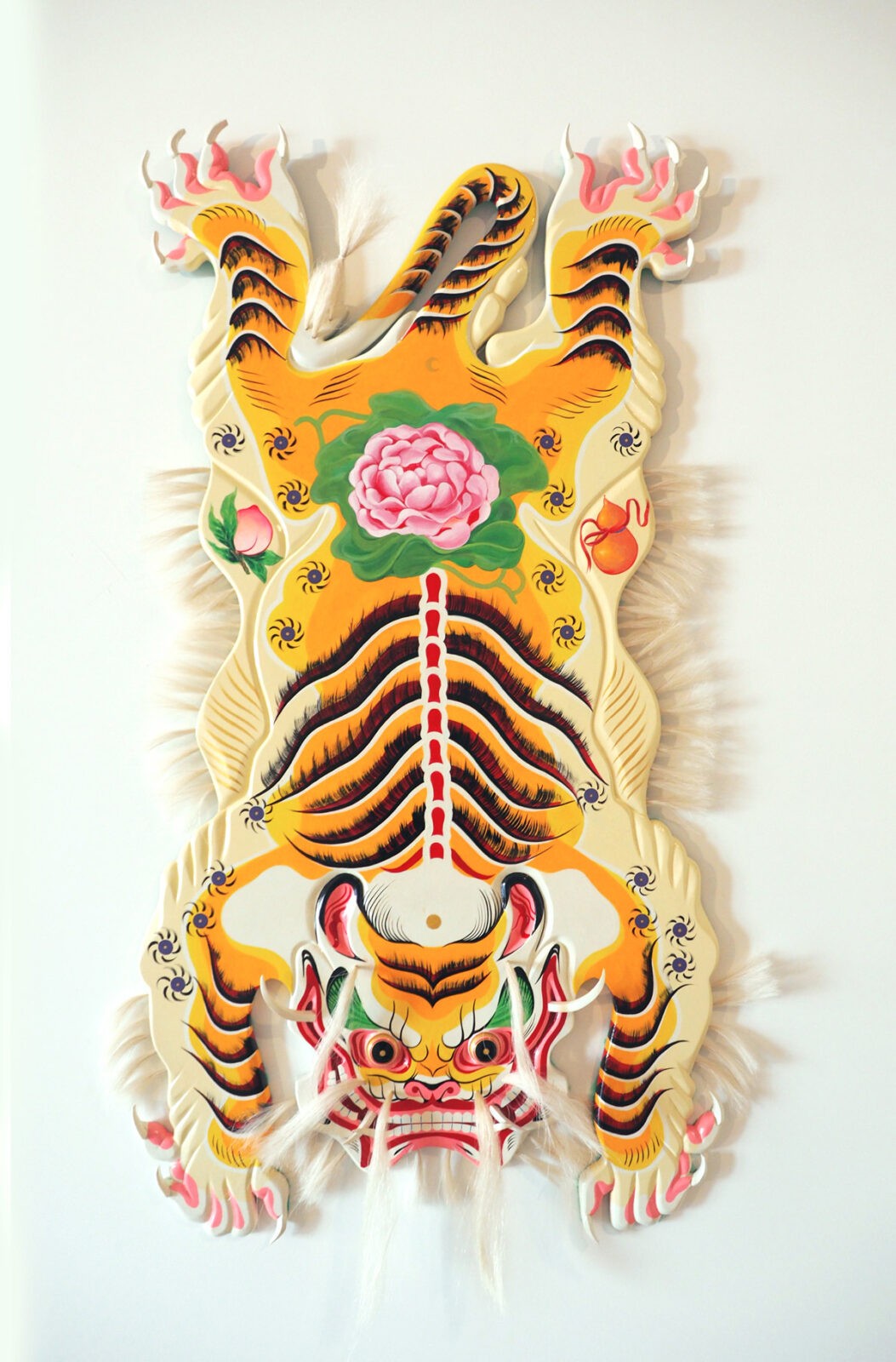 Boy Kong, a painter and muralist who resides in both Orlando and New York City, combines both traditional painting and street art to make absorbing three-dimensional work. Pieces like “First Flower Tiger Pelt” use both affected textural elements with acrylics and oil and materials like horse hair and custom wood-cutting to create wholly new creatures. The artist’s murals and oil on panel works are more traditional in dimension, yet all carry a kinetic vibe in which the subject is reacting to the shape of the canvas. 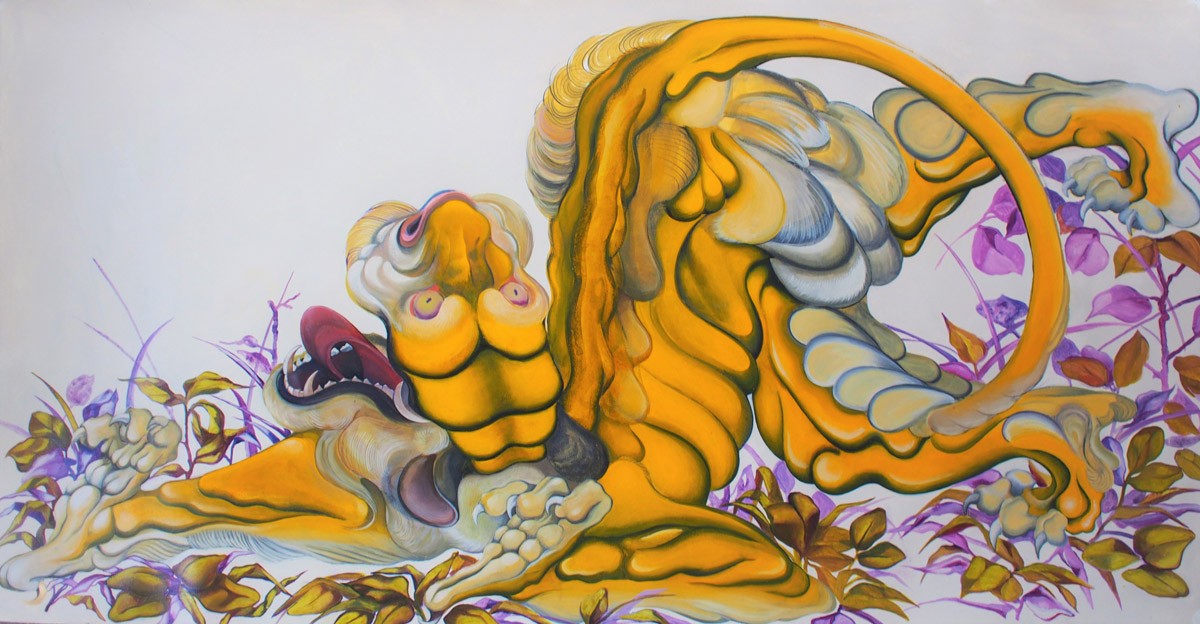 In this latest body of work, Kong further explores and experiments with his own distinct approach to cubist portraiture, depicting figures composed of fluid anatomy and radioactive color, intertwining within themselves as limbs and related extremities naturally give way to other forms. Kong casts his subjects to stand at attention; flat figures in three-dimensional space. And yet, the artist takes great care in balancing the surreal and the purely representational – here stand natural forms in an unnatural state. 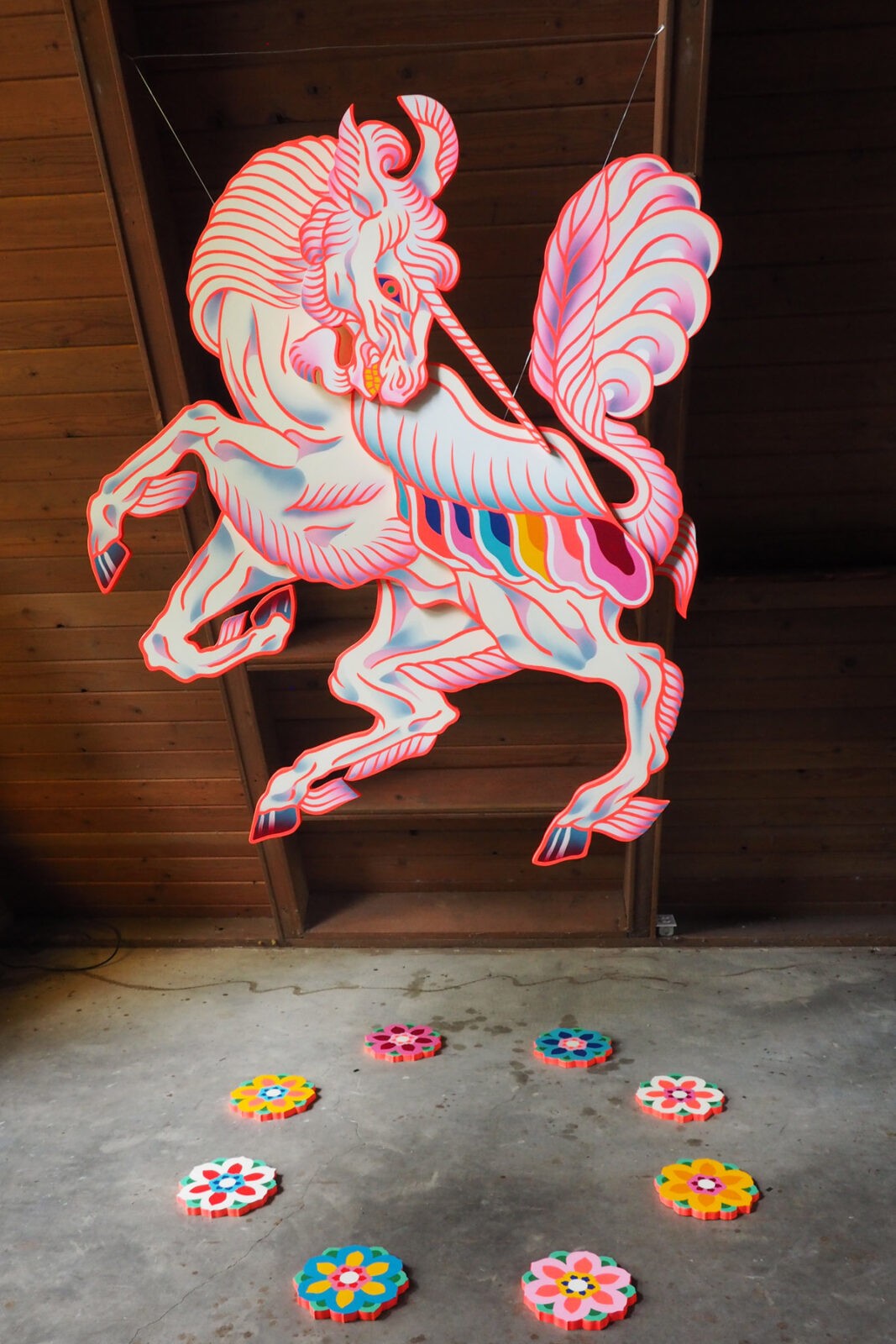 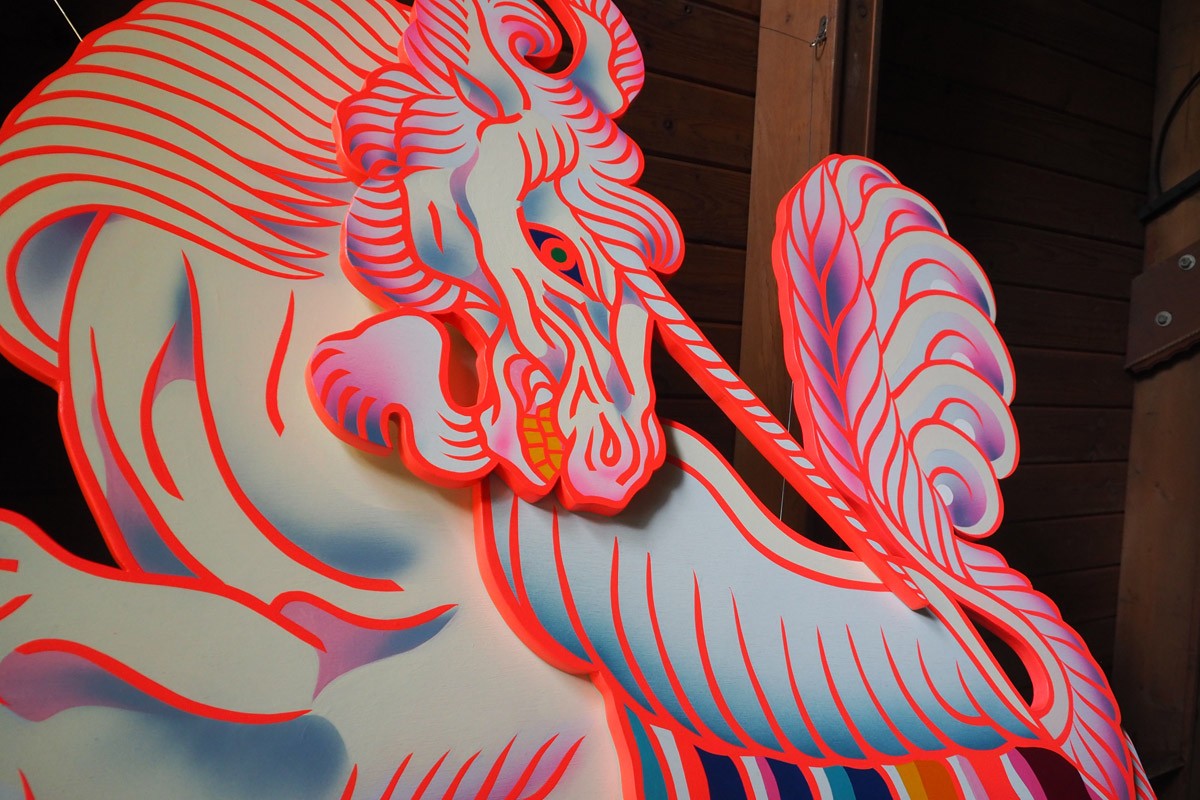 Many subjects in Artificial Lily are borderless paintings that reside in a sculptural realm. At their most elemental, Kong’s subjects would stand up to physiological scrutiny, and yet, the anatomical pieces and forms that make up the whole figure reveal the artist’s love for dissection. Amidst the acid-tone colors and playful posturing, Kong’s love for cubism and Pop art, and his mastery of calligraphic line work have yielded arrested figures, wherein exposed muscle and vertebrae reside on the surface, or subtly reveal themselves through the skin. 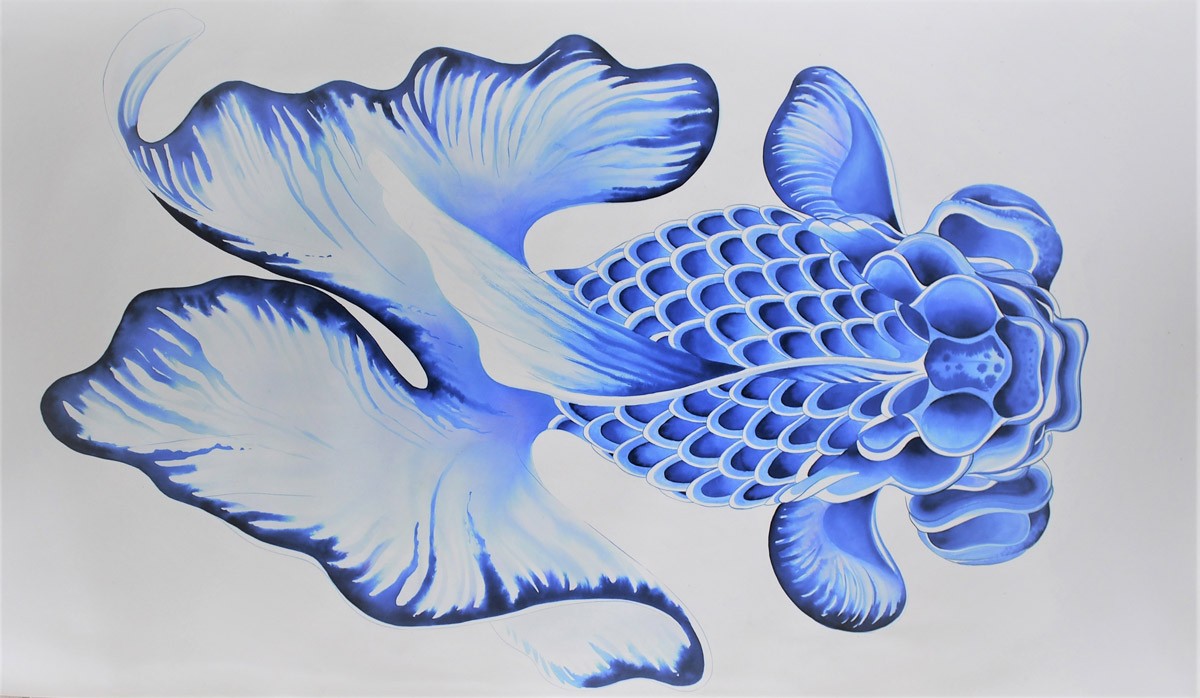 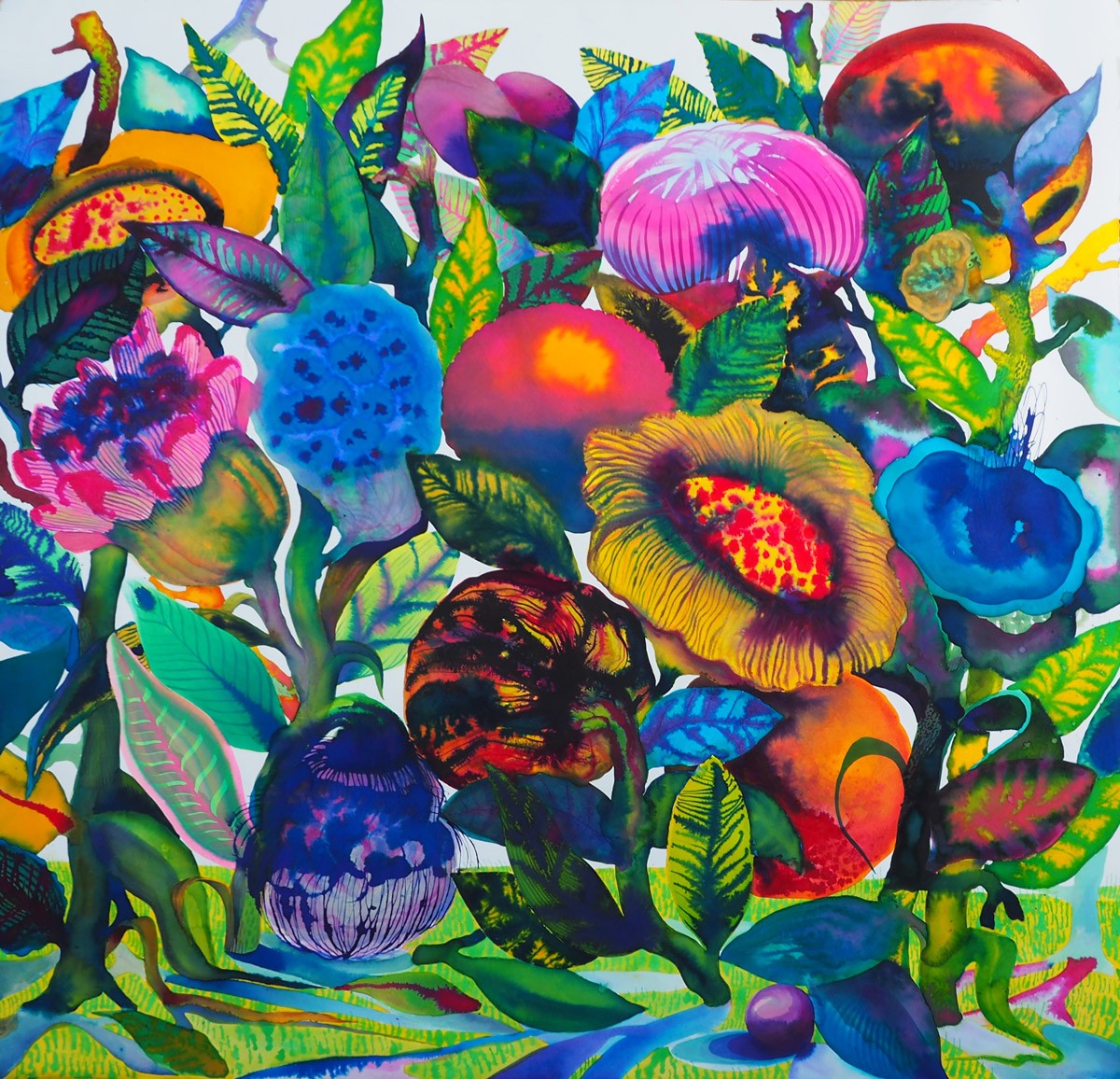 Such dissection is a revelation; while postured in idyllic ways that are pleasing to the eye, each figure’s strengths and vulnerabilities are depicted side by side. Beyond the surface, each of Kong’s characters bears a certain intensity and balance, bordering on intimidating. At the same time, Kong reveals his subjects’ vulnerabilities by placing them atop decorative pedestals, mounting them on the wall, or casting them in colors that stand in defiance of nature.