Melbourne is busy growing, razing old houses and factories and throwing up apartment towers for the almost 2,000 new residents the state gets each week. 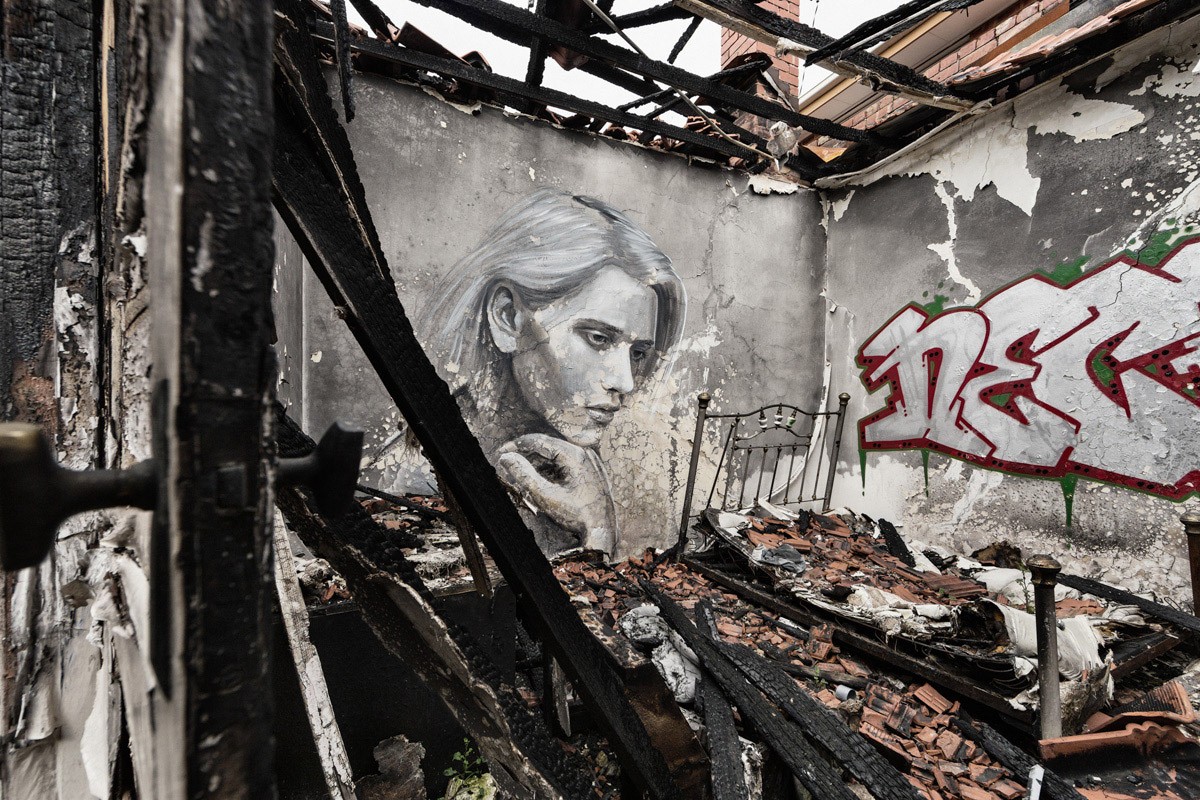 My Uber drives down a street in Alphington down by the Yarra, 7km from the CBD. This is prime real estate; each side of the street is lined with churned earth and brand-new boxes of flats, until we get to the end where the dozers haven’t started yet. We pull up outside an old-fashioned bowls club and a falling down weatherboard house. 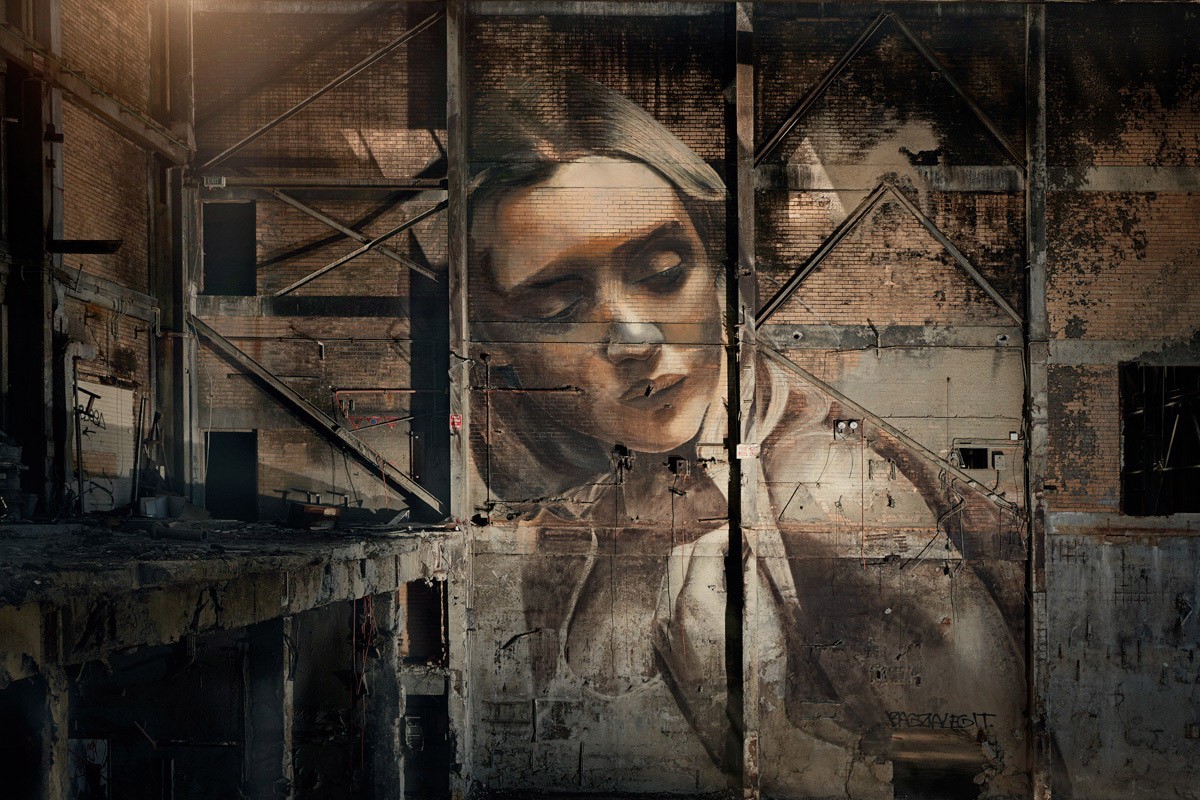 The house is marked for demolition, but inside is a time capsule to mid-century Australiana: swan doilies and an orange crockpot, chenille bedspreads, the three-bar heater; a crystal cabinet and dining room where no one ever sits, and a corner piano and densely patterned brown carpet.

Throughout the interior are enormous portraits of a young woman – she’s climbing the walls, looming over each room of the abandoned house like a ghost, her expression ambiguous. The work is called the Omega Project, and it’s by much-loved Melbourne street artist Rone. Commissioned by the developer to paint the inside of the condemned house, his signature Jane Doe women stare into the middle distance as you walk through the halls and into the bedrooms. Rone also recruited set designer Carly Spooner to decorate the house, turning it into something resembling a movie set or stage. Rone is evoking a mood, a sort of dark nostalgia. The house is in decay, there’s mildew across the ceiling and walls; plaster is falling in, the carpet is mouldy, plates have been smashed and their pieces lie uncollected on the ground. This will all be destroyed when it’s demolished by the end of the month. The woman on the walls seems apprehensive.

Rone tells Guardian Australia that he imagines this was Doe’s childhood bedroom and it has been left intact – down to the coral ornament, the hair curlers, the music box. “She’s grown up and left but her bedroom is unchanged, exactly the way it was when she was a girl.”

The vibe is Sofia Coppola’s Virgin Suicides, or a more sinister version of a Wes Anderson set.

The Omega Project is open free to the public until the house is demolished by August. More than 2,000 people walked through on its opening this weekend past. Rone has painted in abandoned houses before, but never legally and never for public exhibition. He was approached by site developer Glenville to paint the house after its owner, art collector Len Warson, expressed interest.

“[Warson] has been collecting my work since 2011 and he saw my show last year and he asked if I wanted to paint something on the Alphington site,” Rone says. He kept the project secret until it was unveiled this weekend: the most extensive piece of art he has ever created in one space. Rone’s work has long been organised around the twin pillars of “decay” and “beauty”, and so it is here.

“The whole idea is of beauty being fragile. Something we have for a short time is more valuable,” says Rone, 36. “There’s a heightened tension: something being on the brink of collapse makes you absorb it one last time.”

In his personal work, Rone mostly paints women, unless a commission specifies otherwise. These women have loomed over huge, multi-storey city walls in Melbourne, Malaysia and Jamaica, painted by Rone using cherry pickers – and they all have a mysterious quality. The women are pretty but have not been sexualised; some look sad, apprehensive or defiant.

When Rone, born Tyrone West, started making street art, his work was hyper-masculine, as were much of the other images on the street. Then, more than 10 years ago, he changed tact and subject. “Women are the ideal image for me to paint; a guy has an often aggressive or masculine overtones; with women there is strength and fragility,” he told the ABC last year.

It’s no surprise then, when Rone says a lot of his collectors – as he calls them – are women aged between 25 to 35, who follow his work on Instagram.

Much of Rone’s work is painted over or destroyed. He photographs it for limited-edition prints that he then sells to collectors on a waiting list. The work also lives on in social media, of course – but it rarely survives in its physical form. Does that ever make him sad?

“Yes, but one of the things for me is being able to share it with everyone,” he answers. “If I created all of this [Omega Project] and no one saw it, that would be a huge weight on my own shoulders. But the fact that I can share it with everyone and can let everyone in here means that I can cope with that loss. Being able to talk about it with other people helps it live on in other people’s memories. I would be crushed if this was gone before anyone got to see it.”

Years ago, of course, that’s what would happen: “You’d paint things on the street and come past in the morning and it’s already painted over. But there’s also a thrill – it makes it more valuable because it is limited.” Instagram has been great for Rone. “I don’t have to paint something on the Punt Road, Bridge Road intersection to be noticed anymore. It can be painted somewhere out the back of a house on a dead-end street, and I can take an incredible photo and that will seen by more people on their phones than in the middle of a freeway. And people appreciate it more.”

Somewhat ironically, the temporary Omega Project is a homage to an Australia that is disappearing. Backyards are becoming rarer in the inner-city, and even the aesthetic of our houses is fast changing. You don’t really see home decorated like this anymore – it’s all floorboards, Smeg appliances and stainless steel benchtops.

“I’m of a generation where I remember houses like this, going to visit my grandparent’s friends. There’s a ‘good room’ that no one sits in, with things gathering dust. But you don’t really see it anymore. Who has pianos?” asks Rone.

Lucky enough to make a living from his art, Rone’s work is taking him all over the world. He’s planning a trip to Scotland soon, a commercial job to paint the interior of bar. But he’s loyal to his home town.

“I think Melbourne is the best city in the world for street art. We may not have the hundreds of thousands of broken-down buildings that South America has, but we have the communities and people here that follow the street art, that are very supportive. There’s so many collectors here and businesses that are willing to pay an artist to paint their cafe.”

In Sydney, it’s a different story.

“In Sydney the biggest thing that killed [art] on the street, which killed the progression, was the Olympics. It whitewashed everything. It encouraged a culture of do-something-quick … Why would you spend four hours on something when it’s not going to be there tomorrow?” he says.

“Whereas in Melbourne, stuff was staying … and that was encouraging to artists to put more effort into their work instead of the ‘get out of there and blast it’ mentality.”

Still, Rone is scathing of Hosier Lane, a street in the Melbourne CBD that’s become a tourist hot spot for its art-lined walls. “You go painting down Hosier Lane and you feel like a busker,” he says. “It’s a bit of tragic space now – I hate that it’s the street-art destination for tourists.”

He looks around his beautiful, condemned, haunted house. “I wish they could see this.”

• The Omega Project by Rone is open until Sunday 30 July at 28 Parkview Road, Alphington in Melbourne