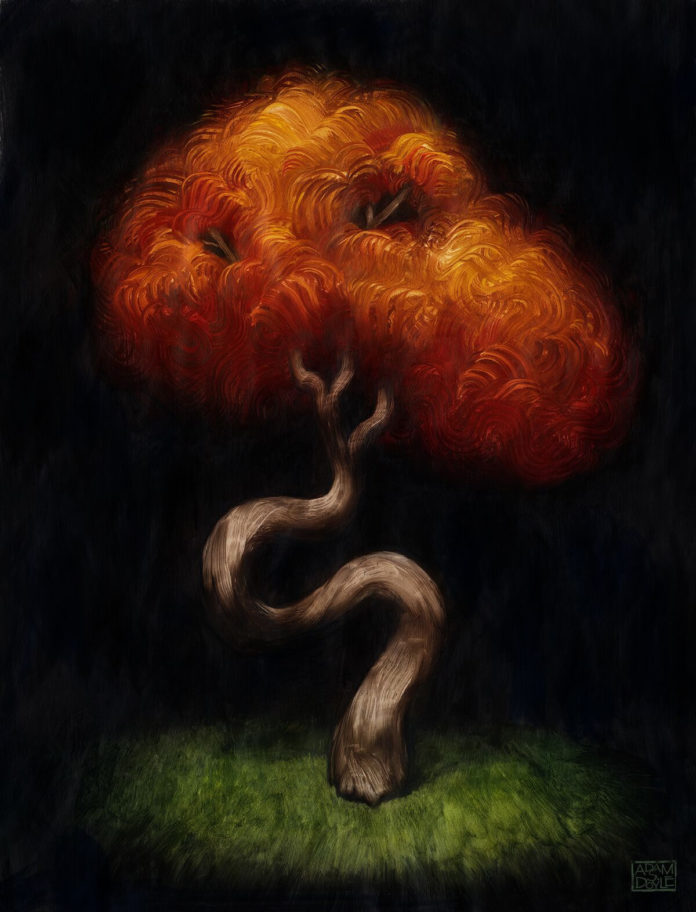 Artist Adam S. Doyle is known for his paintings of birds and other animals that call attention to, rather than mask, his brush strokes. In his latest series, “Night Fall Trees,” Doyle shifts his focus to a different living entity. “By putting trees front and center as subjects, instead of relegating them to the background where they usually are, I’m saying these silent sentinels of our planet deserve our full attention and respect,” the artist shares with Colossal.

Like his other series, “Night Fall Trees” centers on Doyle’s obsession with energy. The swirling tree branches are wound tightly within each other, the tufts of leaves envelop the top branches, and the widespread roots bury themselves into the ground. Inspired by a nighttime glimpse of a well-lit tree last October, Doyle also says this series is about the seasons and the resilience the trees have.

Fall is often associated with colorful foliage, which is best seen during the day. But fall is also a season about transition, heading in for the long nights and bone-chilling cold. Winter is a hard time. Trees get through it, though. These paintings reflect on being ready for what’s to come and like the trees knowing we’ll get through it. There will be blossoming once again in the spring.

Doyle tells Colossal his creative plans include writing fiction and nonfiction. You can keep up with the artist’s latest energized paintings on Facebook. He even has another site for his children’s projects.