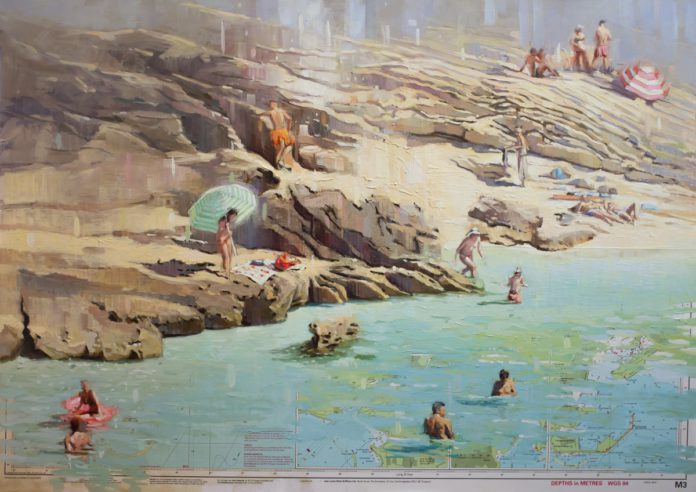 It’s that time of year again, where ninety percent of emails are met with an ‘out of office’ reply from holidaymakers ditching their desks in search of warmer climates and more relaxing locations.

For eleven months of the year, I stare green-eyed at these responses, promptly shaking thoughts of sunny beaches from my head. However, as I approach my own jaunt, I’m once again filled with daydreams of sun, sand and Sangria.

If you’re on the holiday countdown, this beautiful series of paintings by London-based Johnny Morant is guaranteed to get you in the mood. Working primarily in oil, and in a figurative style, the artist reflects and expands on his interactions and experiences – his work aiming to elaborate on moments from the recent past to create personal and explorative responses.

After attending art school in Bristol and Bournemouth, Morant has since resided in London and Amsterdam. Asked to comment on his last exhibition, he explained: “By playing on the border between clarity and suggestion, my work prioritises the intuitive application of paint and aims to describe the viscosity of light and fragility of form.”

For this particular series, Morant sailed across the Mediterranean with a view to producing oil paintings for his fourth solo exhibition at The Rountree Tryon Gallery, London, 26 September – 5 October 2017. Together with his girlfriend Julia, who quit her job for the five month voyage, the couple had no previous sailing experience.

“I sailed with my painting equipment and made small oil paintings and sketches along the way, in preparation for the larger studio-based work that would follow upon our return.

“Over five months we became proficient at handling our boat and enjoyed receiving guests onboard along the way. We visited many islands including: Lefkas, Corfu, Sicily, Sardinia and The Balearics before lifting the boat for winter in Spain.”

Upon returning to his studio in London, Morant began work distilling these experiences into a variety of works that capture the essence of exploration and particularities of each location. He has now completed a large number of paintings for the exhibition.