Recently, it has become fashionable in the art world to call any creative borrowing plagiarism, and even theft. Using masters of ideas, plots, techniques, compositional and color solutions, unique creative finds of other artists – the phenomenon is ancient, as art itself, which is difficult to give an objective assessment.

It is difficult to steal someone else’s idea of a master who carries it in his head until he realizes it. Assign the same thought, having acquired some form, is simple. It is theft and misappropriation of others’ materials that is plagiarism, which goes against ordinary theft.

This negative phenomenon at all times was of concern to artists, since the idea, the story line, the composition structure and the color solution are indisputably the intellectual property of the master.

There are many examples where artists, inspired by the works of the classics or their contemporaries, took as their basis either the story or the composition and reworked them in their own way, invested all their skills and experience, which eventually gave works reflecting their creative individual vision, and sometimes even surpassed the originals.

In fine art, as an example, this phenomenon can often be seen among British artists, based in their work on the tradition of Italian art of the XV century of the early Renaissance. Sinistered by this and the classics of other times, they sin and contemporaries.

In its essence, imitation is the following of an example, a model. Sometimes it happens that without having his own ideas, his manner of writing, the artist uses ready-made works of masters for the samples, depriving himself of the need to work on increasing his own potential.

On the other hand, the borrowing of ideas in painting has a positive impact, since the artist, using them for his further work, develops and improves the already embodied thought by another author. To some extent, this is the impetus for the creation and development of their creative activity.

Pictures-twins, written by one author in different years

The most vivid example of the creation of several copies of the same work by the same master are the paintings of Titian Vecellio, where you can clearly see how the artist’s view of the image of Danae or Mary Magdalene changed in twenty years. 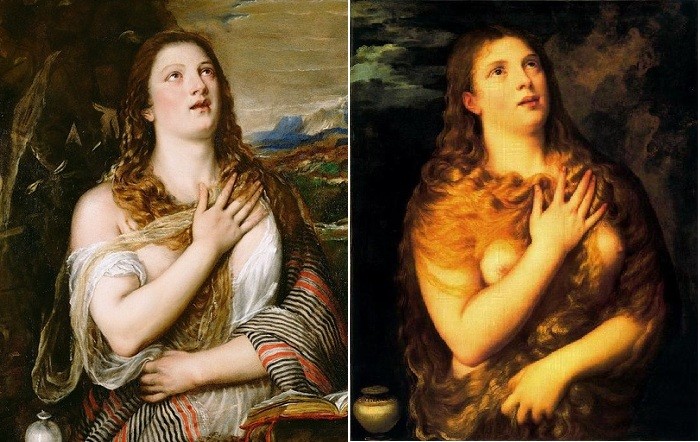 What is noteworthy, in all four Titian’s paintings in the image of Magdalene is depicted the same model – Julia Festina.

As we see from the selection of reproductions, the ideas embedded in art are too diverse, and it is difficult to determine the degree of their borrowing or plagiarism, for in any situation each artist has attached his hand, his thoughts, his creative approach to the creation.