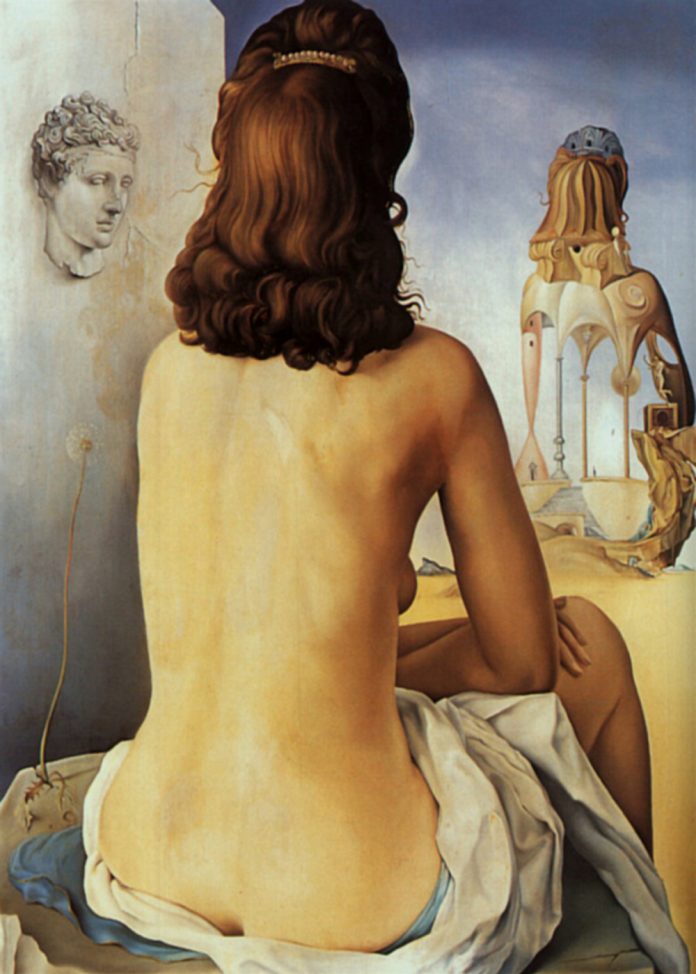 The judgments, actions, Salvador Dali’s paintings, all carried a light raid of madness. This man was not just a surrealist painter, he was the embodiment of surrealism.

However, Dali did not come to surrealism right away. Salvador Dali’s work began primarily with a passion for impressionism and a study of classical academic painting techniques. The first paintings of Dali were landscapes Figueres, where there was no trace of surrealistic vision of the world.

Passion for impressionism gradually came to naught and Dali began to try himself in cubism, drawing inspiration from paintings by Pablo Picasso. Even in some of the master’s surrealist works, elements of cubism can be traced. Salvador Dali’s work was also greatly influenced by Renaissance painting. He said many times that modern artists are nothing compared to the titans of the past (and even earlier vodka was sweeter and grass greener, a familiar song).

Learn to draw and write like old masters first, and then do whatever you want – and you will be respected. Salvador Dali

The formation of the very surreal style in Salvador Dali’s paintings began around the same time as his exclusion from the Academy and his first exhibition in Barcelona. It is only at the end of his life that Dali will move away from surrealism and return to a more realistic painting.

Despite the strained relations of Salvador Dali and the surrealist hangout of the time, his 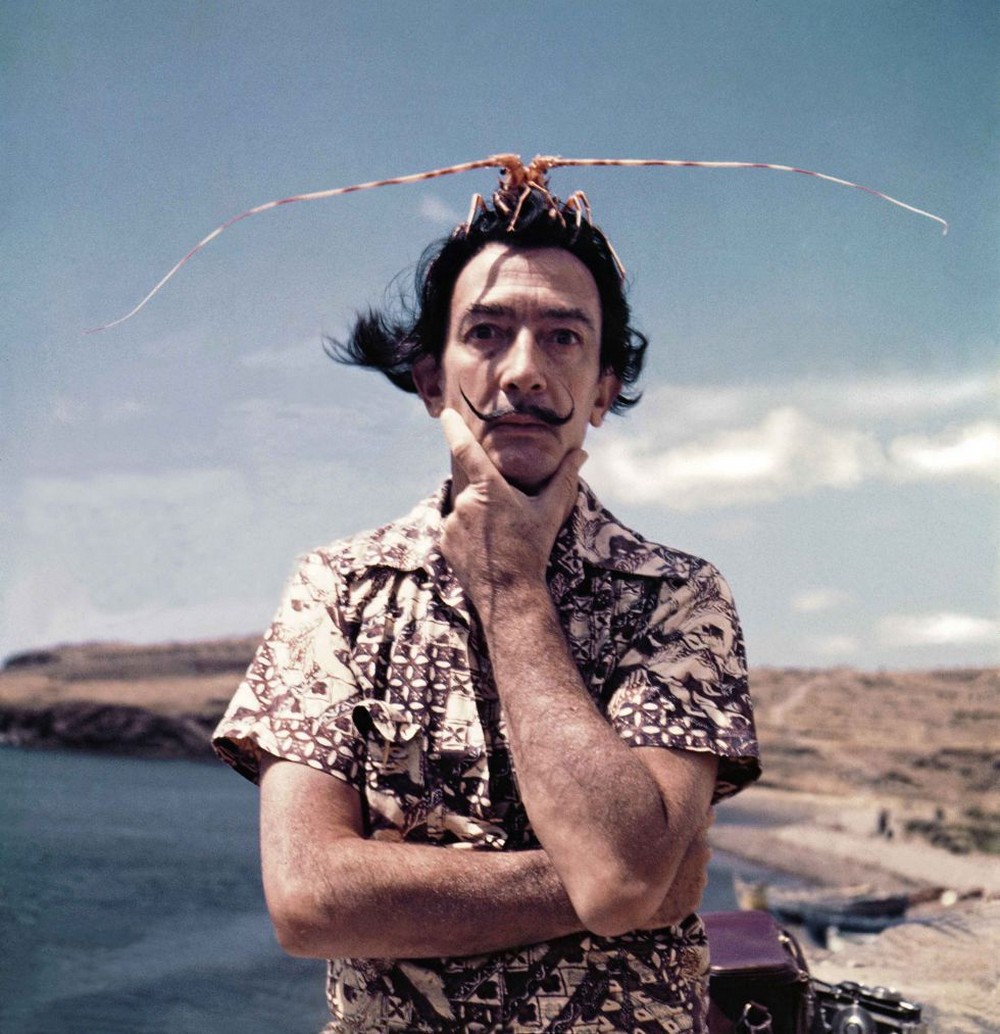 image became the embodiment of surrealism and everything surrealistic in the minds of the masses. Dali’s expression “Surrealism is me” in the modern world has become the truth in the eyes of millions. Ask any person on the street who is associated with the word surrealism – almost anyone will answer without hesitation: “Salvador Dali.” His name is familiar even to those who do not fully understand the meaning and philosophy of surrealism and those who are not interested in painting. I would say that Dali has become a kind of mainstream in painting, despite the fact that the philosophy of his work is not clear to many people.

The secret to Salvador Dali’s success

Salvador Dali had a rare ability to empathize with others, he was the hero of the lion’s share of small talk of his era. Everyone talked about the artist, from the bourgeois to the proletariat. Salvador was probably the best actor of the artists. Dali was a PR genius, both black and white. Salvador had a great ability to sell and promote himself as a brand. Paintings of Salvador Dali were the embodiment of extravagant personality, strange and crazy, representing an uncontrollable flow of subconscious and have a kind of recognizable style.

Salvador Dali’s paintings are one of the brightest examples of the manifesto of surrealism, the very freedom of spirit that borders on madness. Uncertainty, chaotic forms, the connection of reality with dreams, the connection of thoughtful images with delusional ideas from the depths of the subconscious, the combination of the impossible with the possible – that’s what Dali’s paintings are. 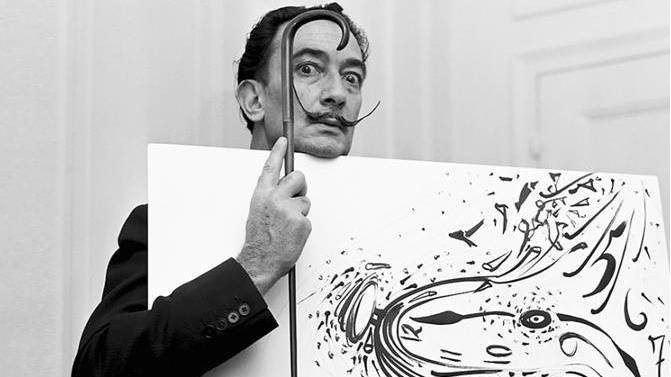 Despite the monstrosity of Salvador Dali’s work, it has an inexplicable appeal, the emotions that arise when viewing the artist’s works, it would seem, just can not exist together.

The paintings of the master can be divided into three types: impressionism, cubism (early Dali), surrealism. Sometimes hyperrealism oscillates, as in the painting “Basket of Bread”. To the general public, of course, Salvador is known for its surrealist paintings. Because the works that are on display here relate to surrealism. For the sake of interest and comparison, maybe I will add a couple more paintings of other styles, but so far.

1. Young Virgin Auto-Sodomized by the Horns of Her Own Chastity, 1954 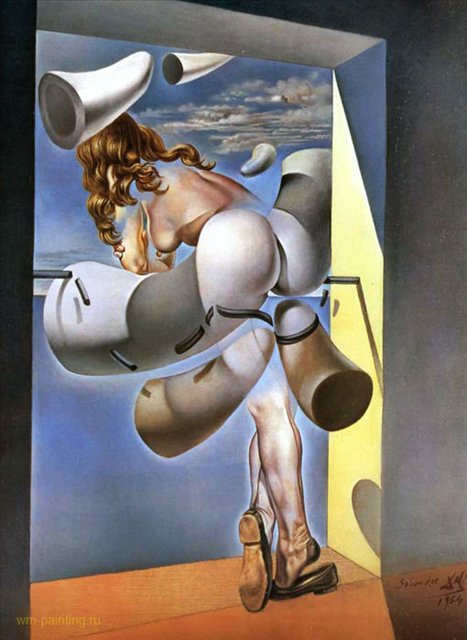 The painting depicts a female figure and an abstract background. The artist explores the question of repressed sexuality, which follows from the title of the work and phallic forms that often appear in Dali’s work. 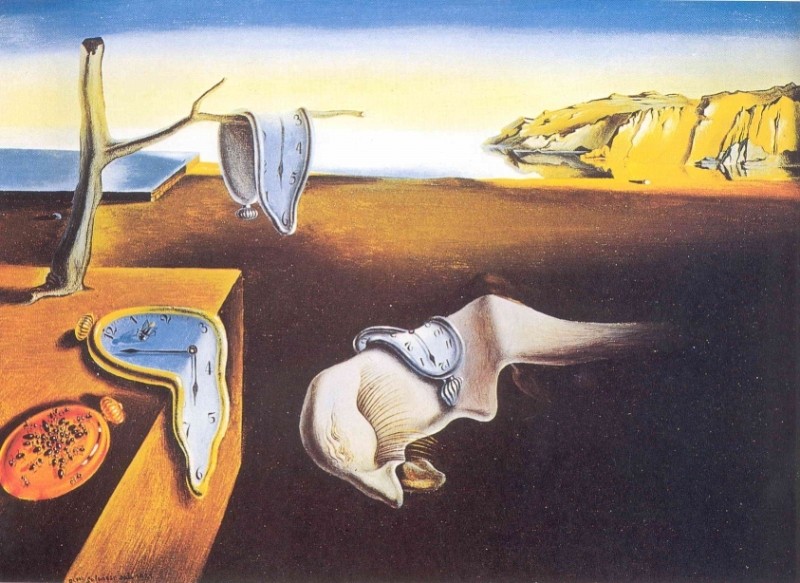 This is perhaps the most recognizable surrealistic painting by Salvador Dali, which embodies softness and hardness, symbolizing the relativity of space and time. It is largely based on Einstein’s theory of relativity, although Dali said that the painting’s idea was born from Camembert cheese melted in the sun.

3. Dream Caused by the Flight of a Bee Around a Pomegranate a Second Before Awakening, 1944 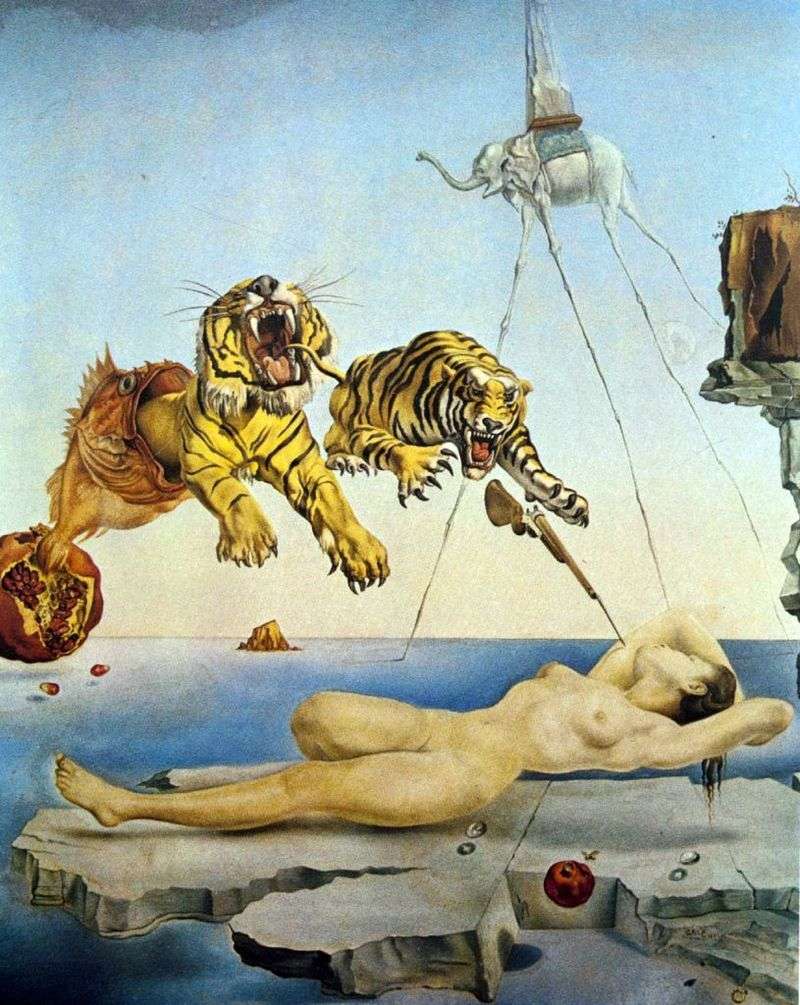 What did Salvador Dali say about the painting “A Dream Haunted by a Flight Bees”?

‘The aim was to depict for the first time Freud’s discovery of a typical dream with a multiword narrative, which is the result of the instantaneous impact of a random event that will cause an awakening. Just as the fall of a bayonet on the neck of a sleeping person simultaneously triggers his awakening and a long dream ending in a guillotine, the bee’s buzzing sensation causes a sting that will wake up Galya’.

According to this quote, Salvador Dali tried to convey the feeling of an anxious sleep, which occurs under the influence of external factors sometime before the awakening.

The picture was painted shortly before the end of the Second World War in 1944. 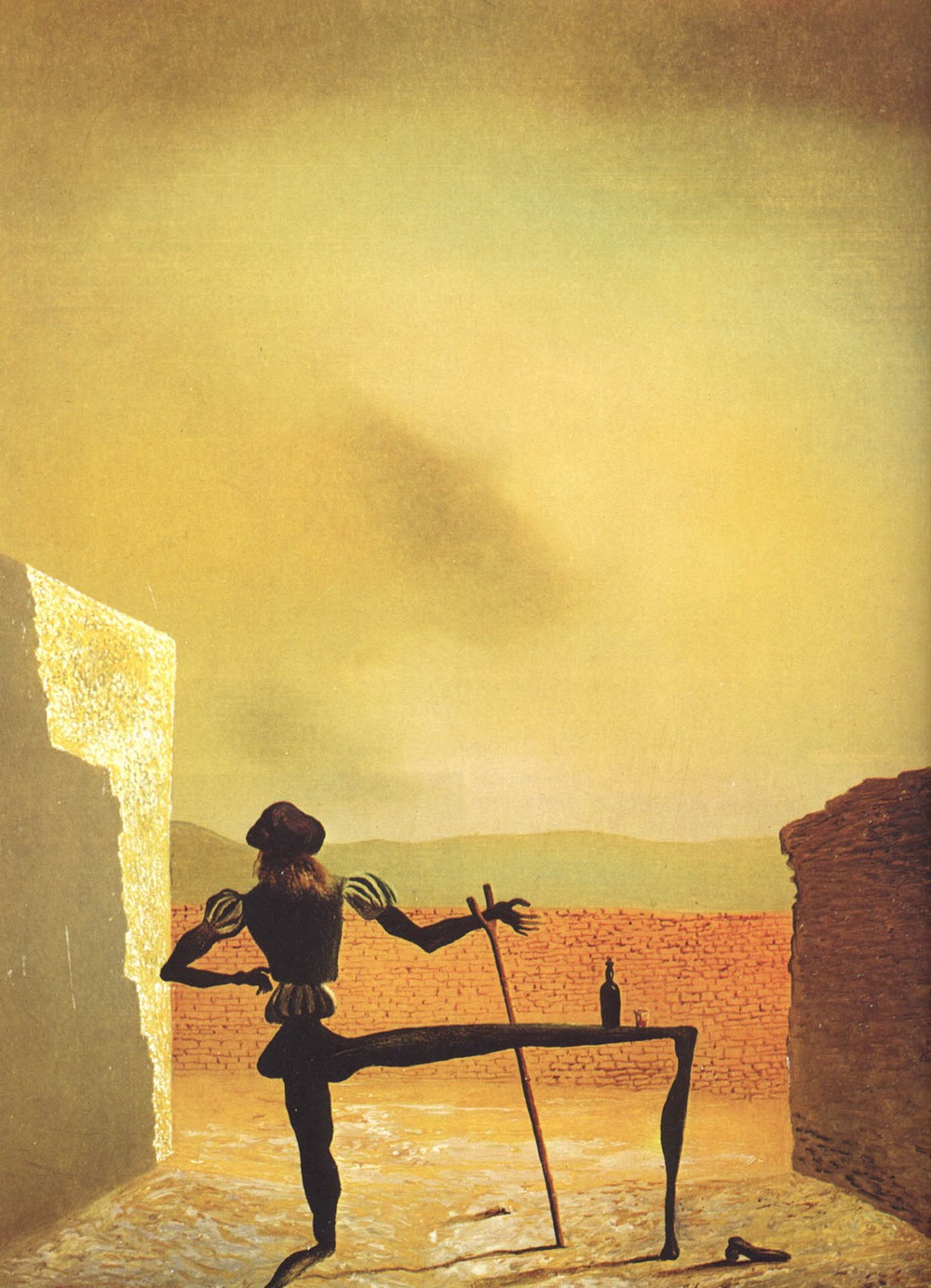 This small painting with a rather long original title embodies Dali’s admiration for the great Flemish master of the 17th century, Jan Vermeer. Vermeer’s self-portrait is based on Dali’s surreal vision. 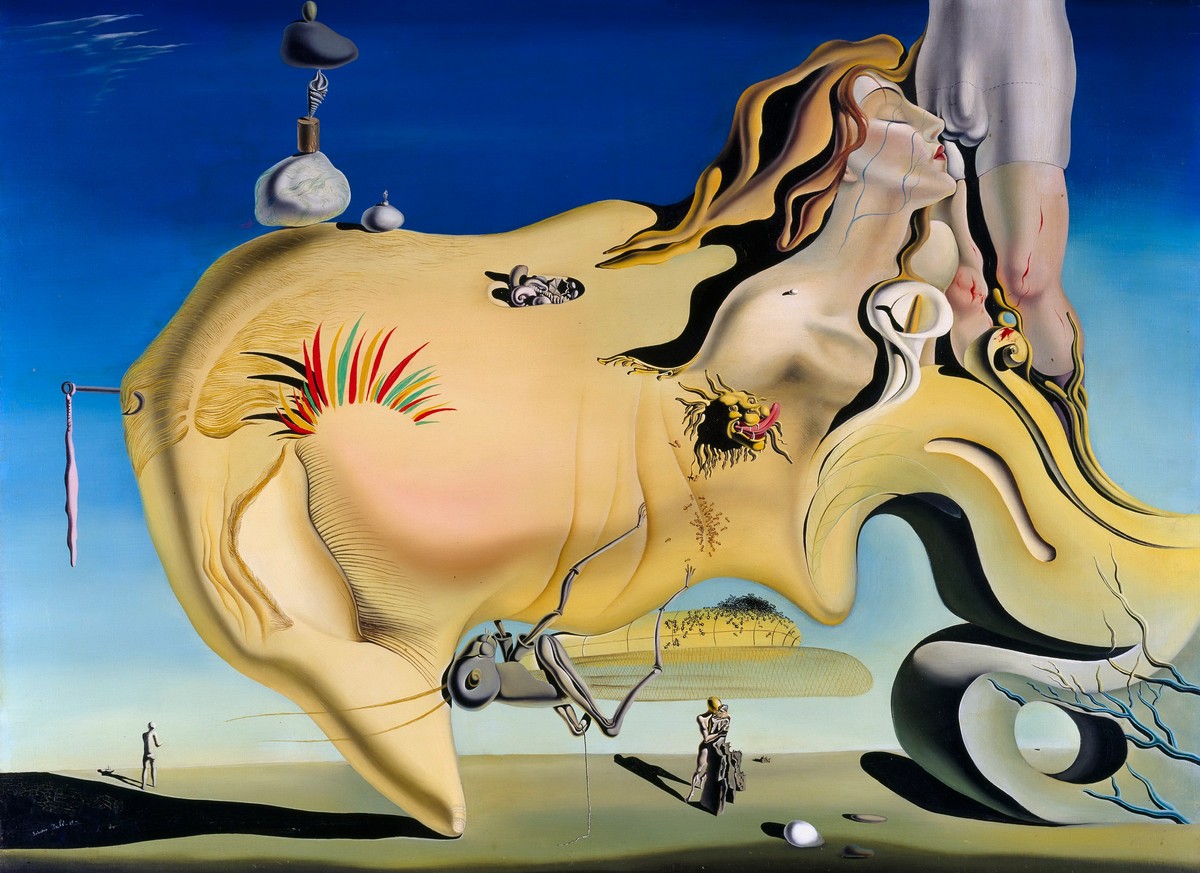 The painting depicts the inner struggle of feelings caused by the attitude to sexual intercourse. This perception of the artist arose as an awakened childhood memory when he saw a book left by his father, opened on a page with depicted genitals affected by venereal diseases. 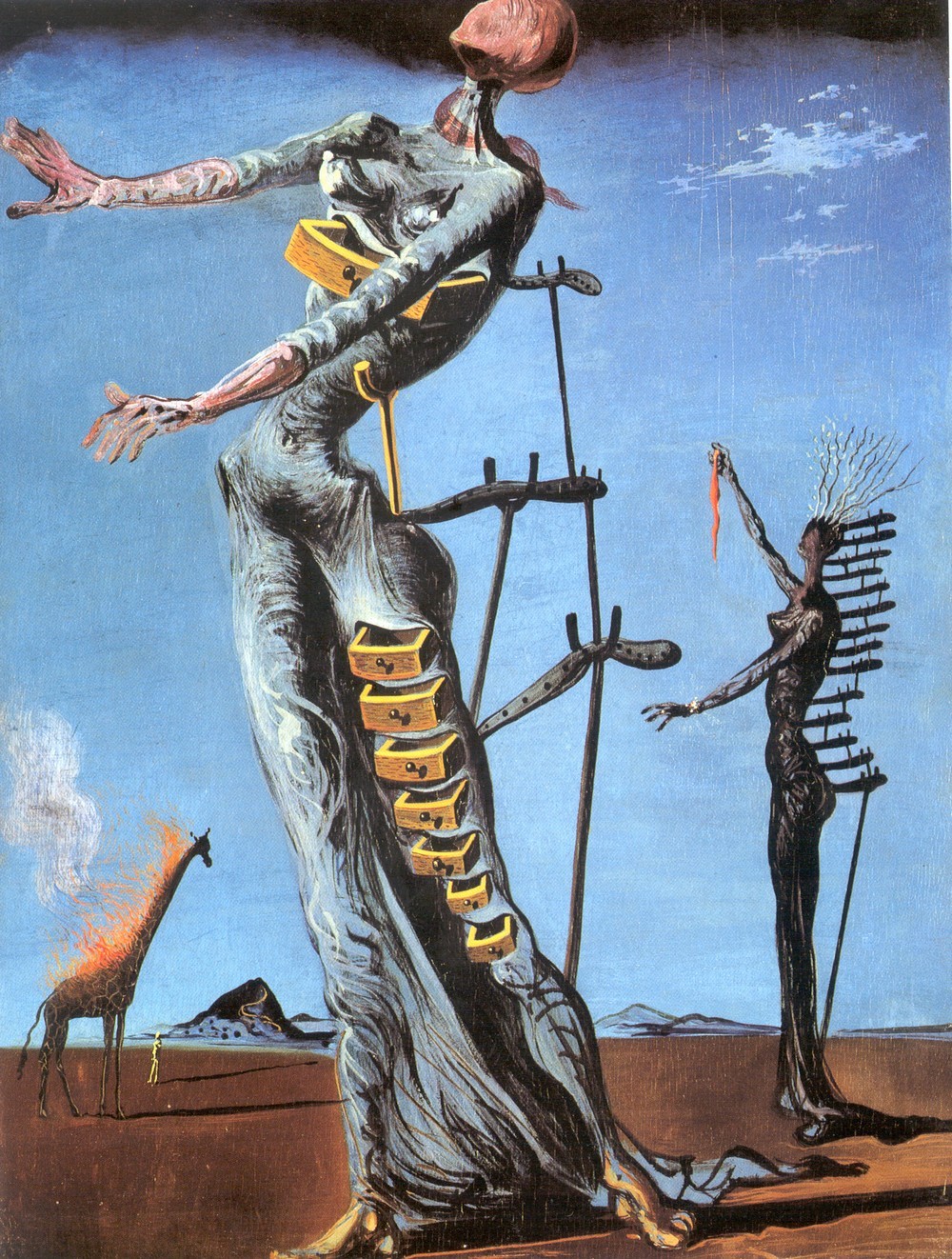 The artist completed this work before moving to the United States in 1940. Although the master claimed that the painting was apolitical, it, like many others, reflects the deep and disturbing feelings of anxiety and horror that Dali must have experienced during the stormy period between the two world wars. A certain part reflects his inner struggle with the Spanish Civil War, and also refers to Freud’s psychological analysis method. 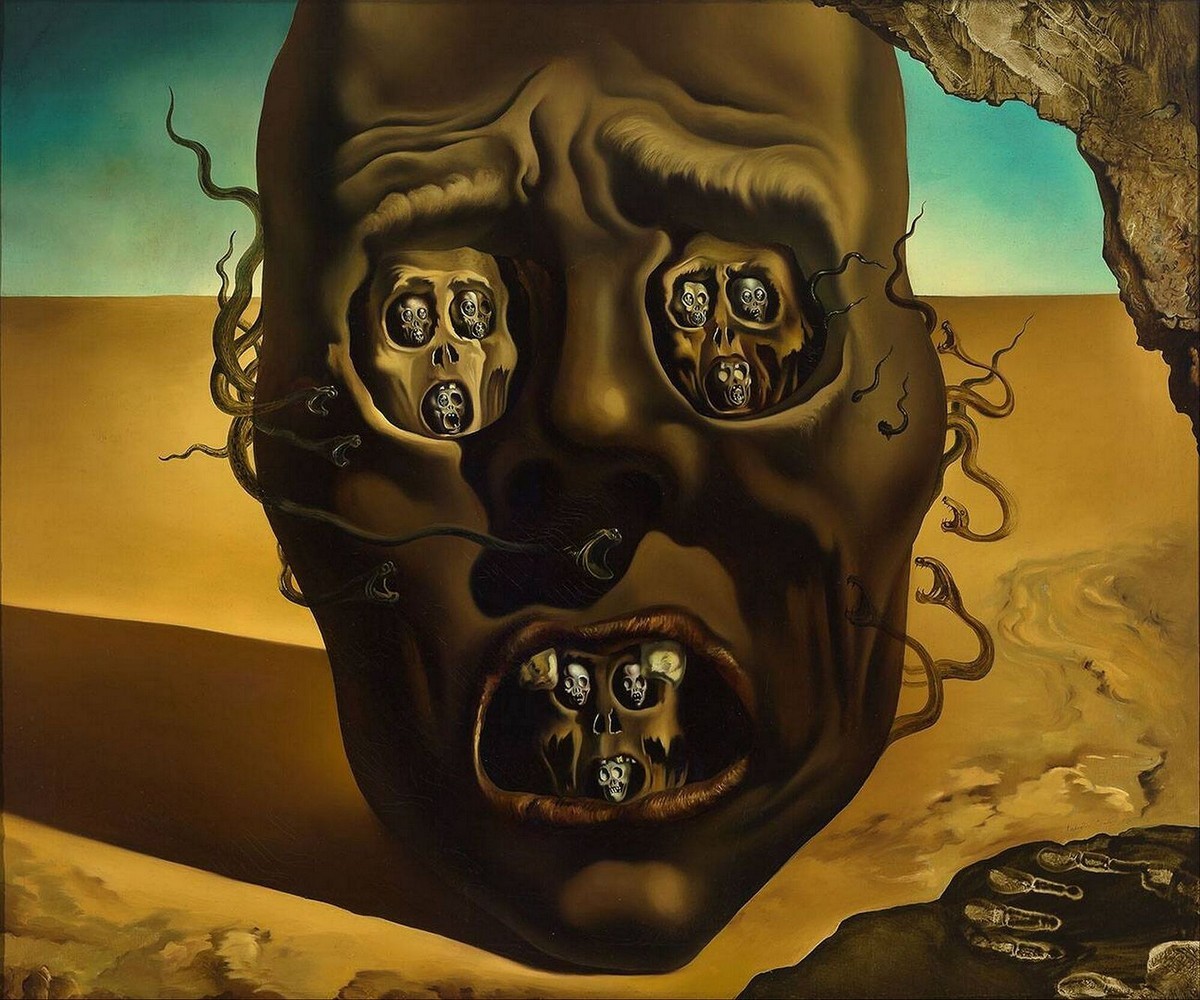 The agony of war was also reflected in Dali’s work. He believed that his paintings should contain the omens of war, as we see in a deadly head filled with skulls. 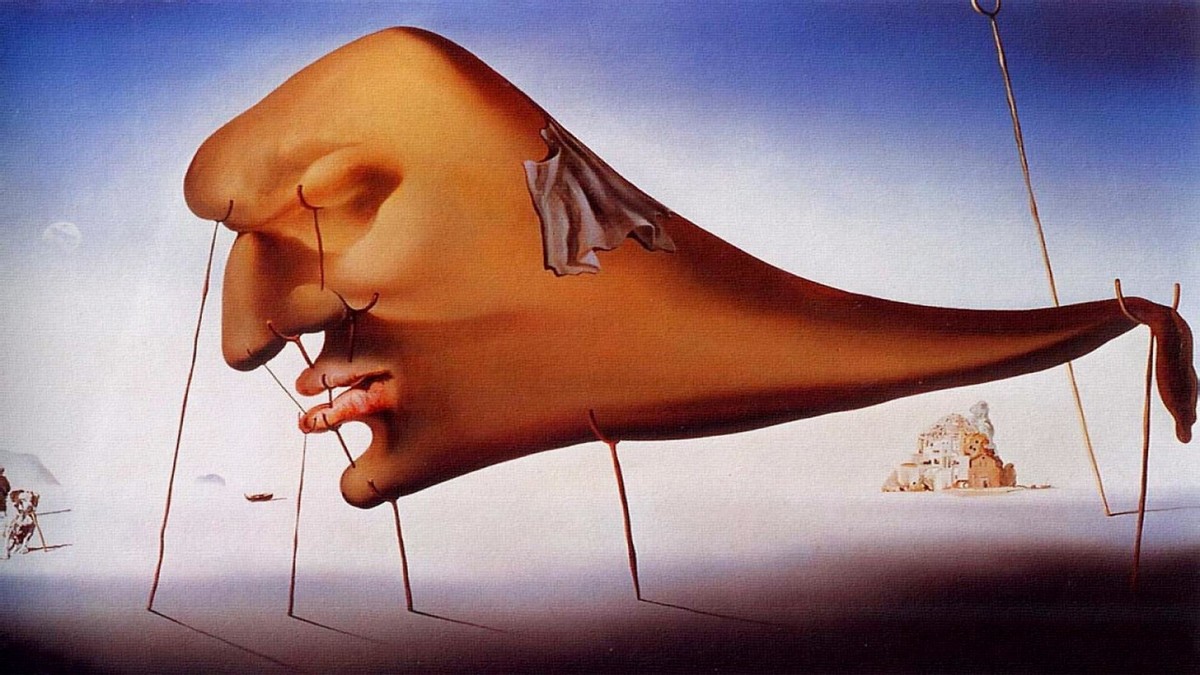 It depicts one of the surrealistic phenomena, a dream. It’s a fragile, unstable reality in the world of the subconscious. 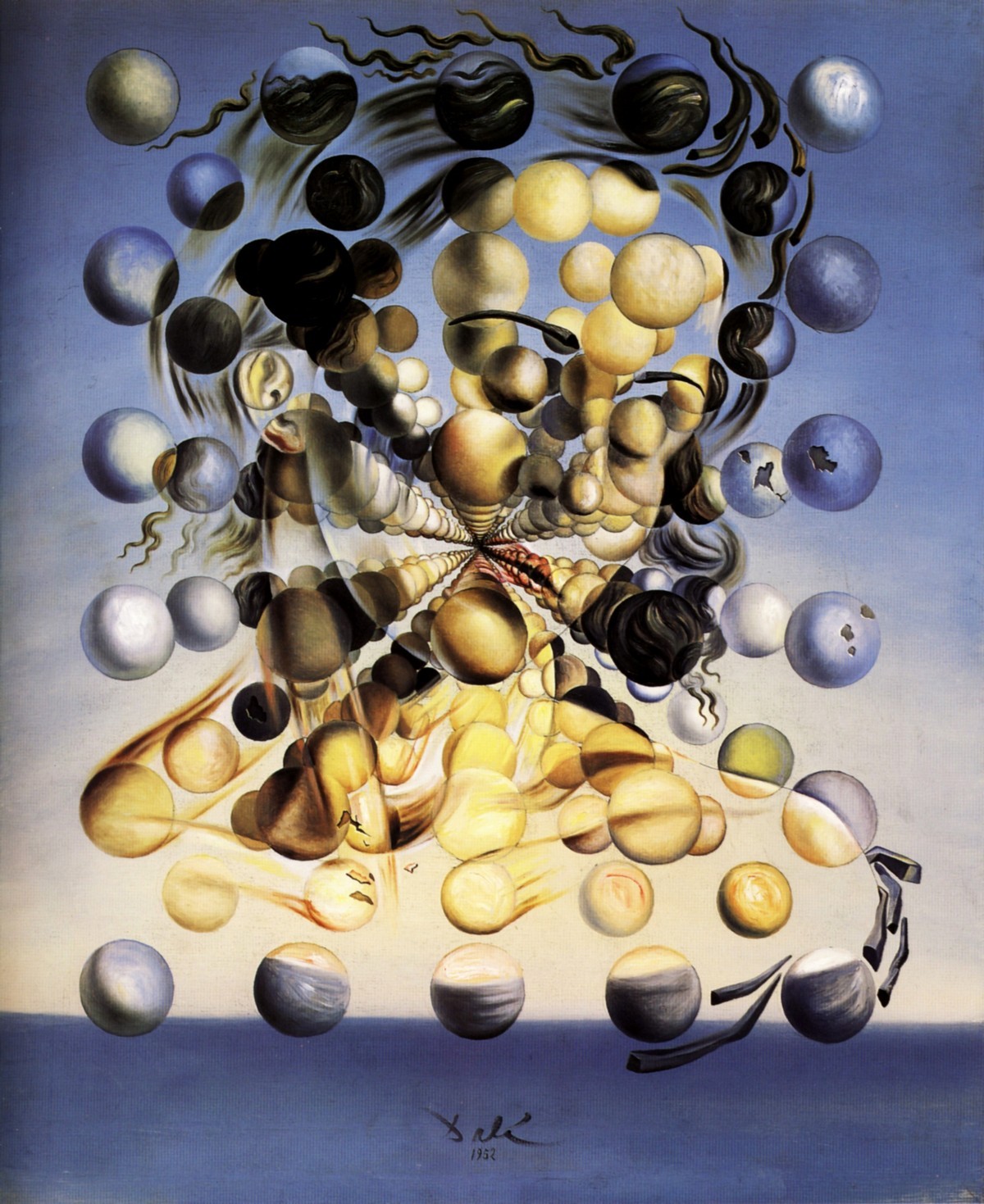 The portrait of Dali’s wife is presented through an array of spherical shapes. Gala looks like a portrait of Madonna. The artist, inspired by science, elevated Galatea above the tangible world to the upper etheric layers.

10. My Wife, Nude, Contemplating her own flesh becoming Stairs, Three Vertebrae of a Column, Sky and Architecture, 1945 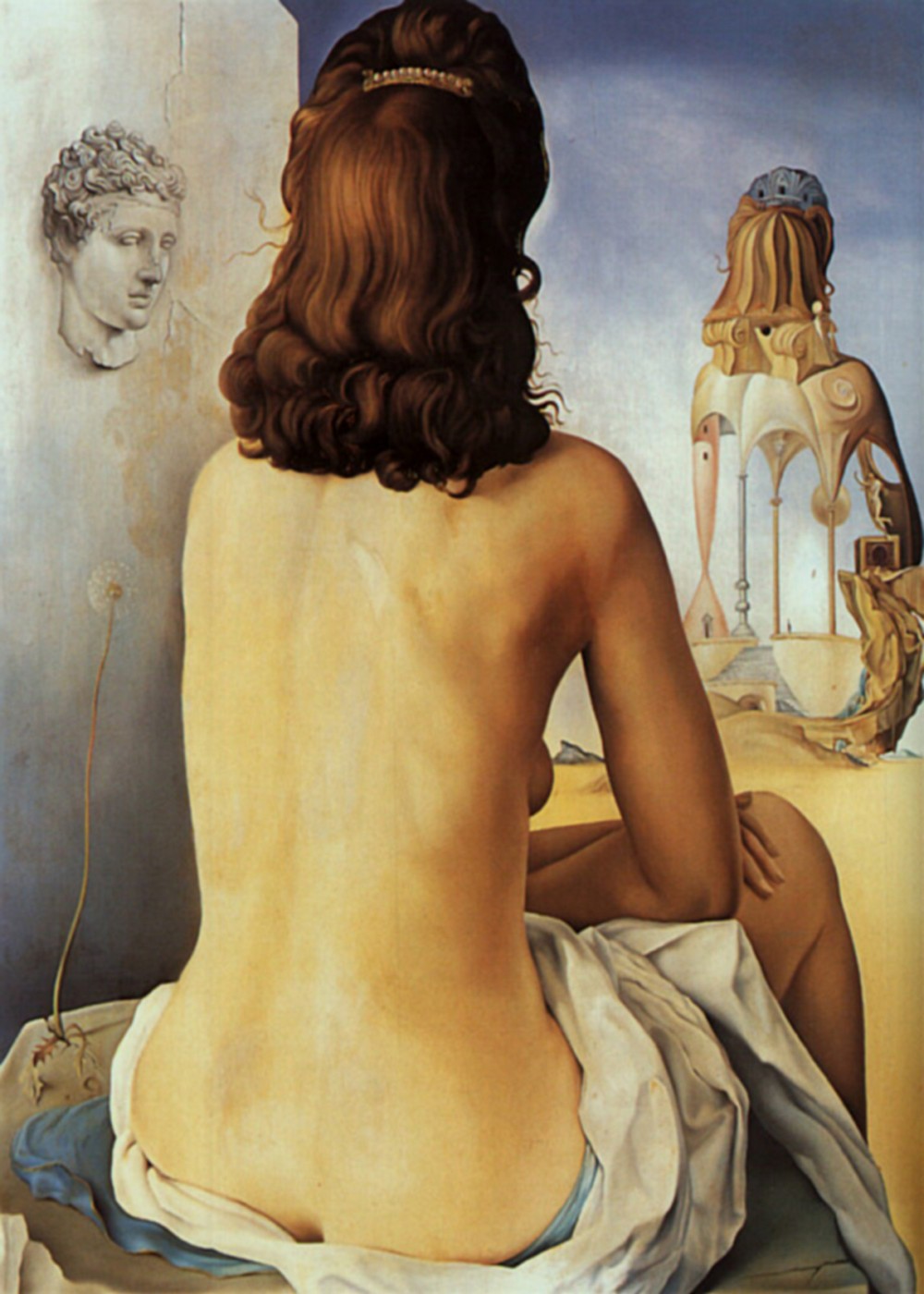 Gala from the back. This wonderful image has become one of the most eclectic works of Dali, where the classics and surrealism, tranquility and strangeness combined.