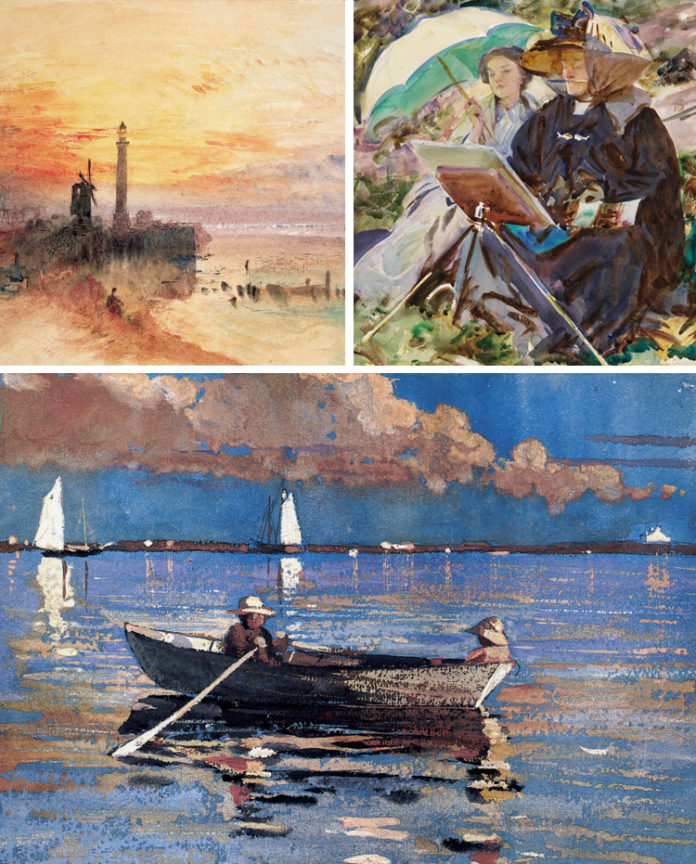 Watercolor painting is one of the most accessible forms of art. More likely than not, everyone has tried this type of painting at some point in their life, whether it be in art class as a child or just discovering it as an adult. Despite this familiarity, however, many people don’t know its rich history and some of the most famous watercolor artists who have made the medium what it is today.

Similar to textile art, watercolor painting has roots in Paleolithic Europe, but it gained some popularity in manuscript illumination in the Middle Ages. Using brightly colored pigments, artists illustrated small scenes and decorative designs in the margins of handwritten books. These elaborate texts weren’t for everyone—it took four people to create one illuminated manuscript—and the often-religious works were mostly confined to monasteries.

The Renaissance brought watercolor painting into the spotlight. It went beyond decorative manuscripts and into the works of artists like Albrecht Dürer. He, like other easel painters during that time, used watercolor for sketches, copies, or informal drawings. Watercolor painting was also adopted by the elite class as part of their overall education and eventually popularized—particularly in England—as a way to chronicle one’s travels. But while watercolor painting was well known, it was not taken as seriously as oil painting or printmaking.

In the 19th century, however, watercolors had a major bump in status. There was a general excitement about worldwide exploration, and wildlife and nature illustrations were used to illustrate scientific publications. Artist and ornithologist John James Audubon represent the height of this movement, and he used watercolor painting to help bring his realistic drawings of birds to life. His famous book, The Birds of America(1827 – 1839), identified 25 new species. With it, he began an artistic tradition that still lives on today—field guides as illustrated with watercolors.

While Audubon had a restrained, technical approach to his work, other famous watercolor artists weren’t as precise. Georgia O’Keeffe, for instance, played with the fluidity of the medium to create paintings that are beautiful fields of intense color. Like Audubon, she was inspired by the natural world, but her interpretation of it is the complete opposite. Together, they demonstrate the incredible range that watercolor has.

To understand the appeal of watercolor painting today, learn more about some of the most famous watercolor artists throughout history.

Albrecht Dürer was a man of many talents and known for his paintings, woodcuts, and engravings. In terms of watercolor, he was considered one of the first prominent European painters to use the medium in his work. This took the form of sketches of landscapes and nature, which we’re still able to see today thanks to his almost-obsessive collection of work.

Like Dürer, J.M.W. Turner dabbled in more than watercolor painting. Counting poetry and teaching as part of his interests, his general artistic talent was nurtured from a young age. He used his skills in watercolors to show in exhibitions and produce commercial works that provided him his “first real income.” Later, Turner used the medium as a way to chronicle his travels—his passion for it never waning.  The last decade of his working life featured a surge in watercolor painting production.

William Blake is considered one of the greatest poets in the English language, but his art is noteworthy as well. After studying it as a child, he had an apprenticeship with an engraver before trying watercolor painting. Eventually, he perfected his technique of “fresco,” which is basically monotype printing; he first painted a design on a flat surface (like a copper plate) and then applied it to paper. The designs were then individually finished in ink and watercolor, ensuring that each image was one of a kind.

It was about 90 years ago that John James Audubon completed The Birds of America, but it’s still lauded as being one of the best ornithological books ever produced. Audubon’s quest to document our feathered friends also helped start the artistic tradition of naturalistic renderings being completed with watercolor.

Thomas Moran is famous for his landscape watercolors, particularly those of Yellowstone National Park. In fact, it’s his ethereal images of its geysers and hot springs that helped convinced the U.S. Congress to formally designate it as Yellowstone National Park in 1892. Moran’s practice was informed by the Hudson River and Rocky Mountain schools—artistic schools and movements that shaped the aesthetics and imagery of 19th century American landscape painting. 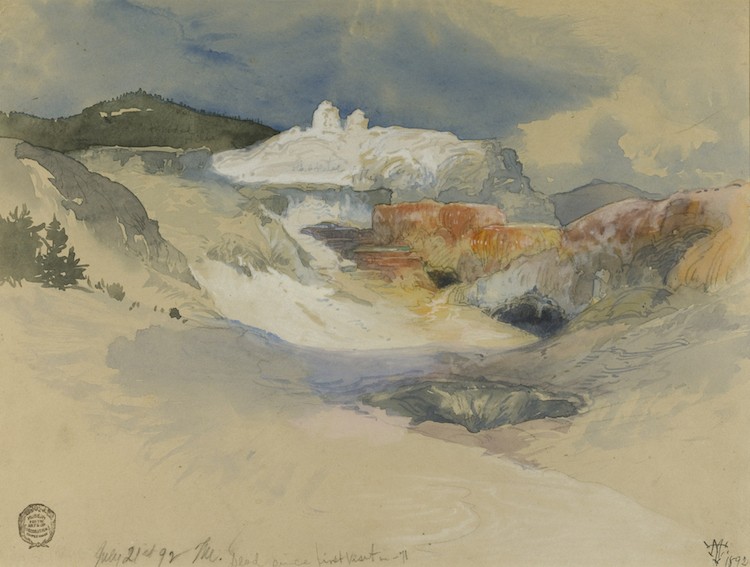 Self-taught painter Winslow Homer based his artistic practice of being in the moment. Although a very private person, one of his contemporaries, artist Eugene Benson, wrote that Homer believed artists “should never look at pictures.” Rather, they should “stutter in a language of their own” and paint (or draw) directly from life. For Homer, this meant idyllic, quiet scenes of everyday life that he completed at home in Massachusetts as well as trips abroad.

John Singer Sargent is renowned for his portraiture, but his watercolor works mark a departure from them. In a similar tradition to other painters, his watercolors were often of landscapes that documented his travels. In these compositions, Sargent tweaked his style to reflect the playful fluidity of the medium; whereas his oil portraits were tightly rendered, the watercolor images of ships and the shore were done in a gestural style.

Georgia O’Keeffe began experimenting with watercolors in her late 20s as a way to play with color and composition. This was before her iconic oil paintings of flowers, and the abstracted watercolors chronicle her artistic journey to becoming comfortable working in a less representational style.

In 1911, Paul Klee joined an artist group called Blaue Reiter, an organization that used their work as a way to express “spiritual truths.” Interested in the likes of non-figurative art and primitivism, color was an important part of the group’s aesthetic. Klee’s watercolor paintings were a means of experimentation in order to be understand his relationship with the “realm of color.”

Charles Demuth artistically came of age during modernism, and his encounters with Cubism was a big influence to his watercolor works. This love of sharp lines and geometric shapes made him a founding member of the Precisionist Movement; his structured elements were paired with diffused washes, fusing order and chaos.

Reginald Marsh’s works have become synonymous with New York City. During the 1930s and 40s, he chronicled the everyday life of the bustling metropolis; this included areas on the fringe like burlesque parlors and Coney Island. With such observational skills, his work was a perfect fit for journalism, and he worked for The Daily News. Of watercolor, he said, “Watercolor I took up and took to it well, with no introduction.”

American artist Andrew Wyeth is the son of a well known illustrator, N.C. Wyeth. Thanks to his father’s guidance, Andrew mastered watercolor at an early age. By 20 years old, he had his first solo exhibition featuring all watercolor paintings. (The show sold out.) As his career continued to grow, Andrew expanded his chosen media to egg tempera, but he continued to create watercolors inspired by his solitary walks in his hometown of Chadds Ford, Pennsylvania as well as Cushing, Maine.

Edward Hopper is known for oil paintings like the iconic Nighthawks, but the artist was adept at watercolors, too. In both media, Hopper’s focus was the same; the American experience as seen through landscapes. “My aim in painting,” he’s quoted as saying, “has always been the most exact transcription possible of my most intimate impressions of nature.”