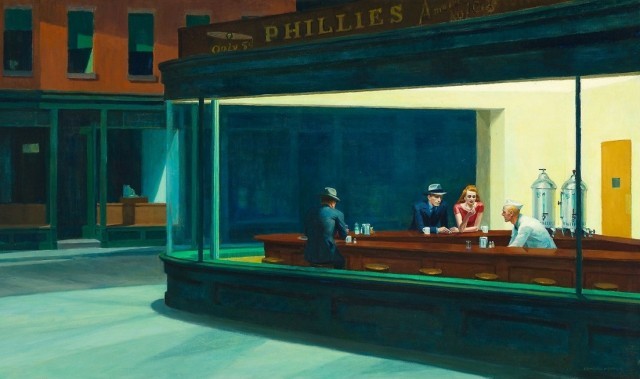 Edward Hopper (1882-1967) is one of the most recognized artists of the 20th century USA. His painting “Nighthawks” became a landmark and source of inspiration not only for the painters, had a huge influence, including the mass culture.

Since childhood, aspiring to draw, Edward goes first to New York, where he studied at a course for advertising artists, then, after studying at Robert Henry’s school, goes to Paris. And this is not just a biographical reference, all of the above will have a great impact on the formation of a unique Hopper style.

Early paintings of the master inherit the Impressionists in both plot and style. One can see the young artist’s desire to imitate everything from Degas and Van Gogh to Monet and Pissarro. “Summer Interior” (1909), “Bistro” (1909), “Tugboat at Boulevard Saint Michel” (1907), “Valley of the Seine” (1908) – these are paintings with a clear “European” aftertaste, which Hopper will outlive themselves for ten years. These works can be called exquisite and quite talented, but they did not determine the success of the artist, although they have outlined its main themes.

Hopper – the artist-urbanist, the large number of his paintings are devoted to urban life and citizens, less often you can find country houses, and clean landscapes are so rare that they can be counted on the fingers. So as the portraits of people, by the way. But “portraits” of houses are found at Hopper regularly, especially throughout the 20-ies, among them “Talbot House” (1928), “Captain Kelly’s House” (1931), “House by the Railroad” (1925). If we talk about buildings, the master and the images of lighthouses are frequent: “Lighthouse Hill”, “Lighthouse Hill and houses”, “Captain Upton’s House”, all for 1927.

French influence can be seen in the paintings of cabaret, theaters, bistros, restaurants, (“Tables for Ladies”, “New York Movie”, “New York Restaurant”, “Sheridan Theater”, “Two on the Aisle”, “Automat”, “Chop Suey”, “Girlie Show”) most of these themes were painting in the 30s, but Hopper never stopped painting until his death in the mid-60s (“Two Comedians”, “Intermission”).

However, as soon as the place names have changed, one can guess the change in Hopper’s focus on the European artistic tradition, which was replaced by the “Dumpster School” organized by former Hopper’s mentor Robert Henry. “The Bucketmakers were the kind of American Wanderers, adjusted for the time being, who painted the urban poor.

The activity of the band was rather transient, but it was the time when the seed of this “soil”, in which he will take root with the beginning of the 30’s, “chanting” American life, got into Edward’s soul. It happened not at once – “American Village” (1912), which is depicted from a perspective typical of Pissarro, a half-empty street will be adjacent to paintings like “Yonkers” from 1916, which still retains the impressionist charm.

In order to understand how often and radically Hopper changed his approach, you can look at two paintings: “Manhattan Bridge” (1926) and “Manhattan Bridge Loop” (1928). The difference between the paintings catches the eye of the most inexperienced viewer.

Modern, impressionism, neoclassicism, American realism… if you add up the most experimental works of the artist, few people will believe that they were written by one person, they are so different from each other. Even having won the popularity of “Nighthawks”, Hopper distracted from the main theme like in paintings such as “Joe in Wyoming” (1946), which shows a look unusual to the master – from the inside.

Themes of transport, by the way, was not strange to the artist: he painted trains (“D. & R.G. Locomotive”, 1925), cars ( “Railroad Train”, 1908), road junctions ( “Railway Sunset”, 1929) and even the rails, making them almost the most important element in the painting “House by the Railroad” (1925). Sometimes it may seem that the machines of progress caused Hopper more sympathy than people – on them the artist distracts from the schematic, not sparing of details.

When viewing a large number of Hopper’s “early” works, the impression is twofold: either he wanted to paint in completely different ways, or did not know at all how he wanted to paint. This is the reason why many people know the artist as the author of about twenty recognizable canvases, written in an easy-to-read Hopper manner, and all the rest of the work remains unknown.

“Night Windows” (1928) can be considered one of the first truly Hopper paintings. Although the motive of a girl in her window room can be traced back to “Summer Interior” (1909) and is found very often, then “Eleven A.M.” (1926), however, they have a classic look from inside the building, but not individual-Hopper penetration “from the outside”, bordering on voyeurism.

At the Windows, we watch a girl in her underwear doing her own thing. What a girl is doing we can only guess, her head and hands hide behind the wall of the house. Visually, the picture is devoid of special delights, halftones, and other things. As for the plot, the viewer receives only a fragment of history, but at the same time a field for guessing, and most importantly – the experience of a peeping eye.

This “peeping”, the look from the outside that will bring Hopper glory. His paintings will be simplified by all parameters: boring monotonous interiors, devoid of details, and the same, impersonal to him become people whose faces are often not a single emotion. This also distinguishes just the famous painting “Chop Suey” (1929) from the famous “Nighthawks” (1942).

The simplicity of the images gives the experience of advertising drawing, which Hopper earned for his living. But it wasn’t the schematic of the images that attracted the viewer to the artist’s work, it was this opportunity to look into someone else’s life or even… his own. The opportunity to find out what the protagonists in the posters would have looked like after they had “worked” their shifts on billboards and city-lights and returned “home” with their smiles off their faces. Men and women, together and separately, are in some thoughtful tiredness of daze, often without showing any emotion. Getting to the robotic unemotionality of the heroes gives rise to a sense of irrationality and anxiety in the viewer.

Tiredness after a working day or dullness in the morning after sleep – these are signs of mandatory Hopper detachment, which sometimes dilutes the midday working boredom and indifference. Hopper was probably also greatly influenced by the Great Depression, which provided him with a thousand such types, destitute, unnecessary, whose despair has crumpled to the size of indifference to his own destiny.

Of course, a closed, uninhabited artist has added something of his own, deeply personal to his images. Having met his love only in the fifth decade, he depicted couples of men and women in different and disjointed, even disappointed. This is best reflected in the painting “Excursion into Philosophy” (1959).

The most “light” works of Hopper, in the literal and figurative sense, are paintings that include sunlight, which often washes a woman “A Woman in the Sun” (1961), “Summer in the city” (1950), “Morning Sun” (1952), “The sunlight on the second floor” (1960) or even performing the role of the main character, “Sun in an empty room” (1963) and “Rooms by the sea” (1951). But even in these, sun-soaked canvases, the lack of appropriate emotions on the faces of the heroes and the callousness of the enveloping their space is disturbing.

Published in 2017, the storybook “In Sunlight or In Shadows: Stories Inspired by the Paintings of Edward Hopper” is a confirmation of all the above, emphasizing the relevance, importance, and impact of Hopper’s work on American culture. Each of the stories is named after one of the artist’s paintings and is his literary “adaptation”. The authors, who worked on the collection, tried to expand the frames of the paintings, to see their background and show what was left “behind”. Stories for the book were written by Stephen King, Lawrence Block, Michael Connelly, Joyce Carol Oates, Lee Child, and other authors, working mainly in the genres of horror, thriller, and detective. The anxiety and mysteriousness of Hopper’s compositions played the masters only on the hand.

In addition, Edward Hopper is a favorite artist of the master of cinema surrealism David Lynch, the painting “House by the Railroad” was the basis of the scenery of the legendary film by Alfred Hitchcock “Psycho”.