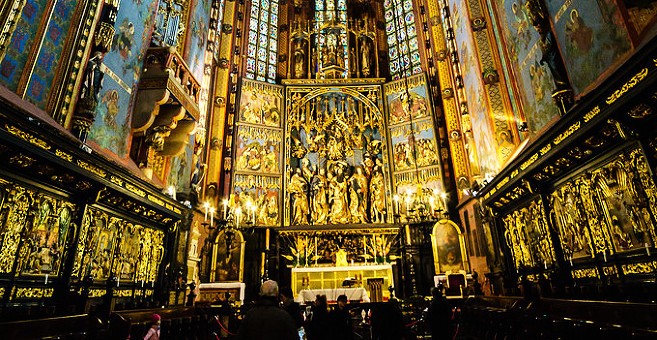 The largest altar made at the end of the Gothic period (the principal figures measure 2,7 m, the whole structure 11,9 m high) is the masterpiece of Veit Stoss. Combining a primitive violence of emotion with technical mastery over the handling of forms, Stoss created an individual style that found imitations in Bohemia, Hungary, Poland and Transylvania. 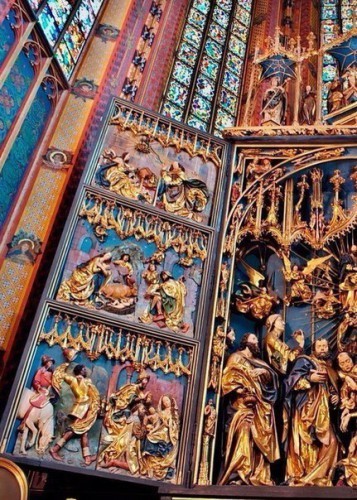 The central section dominates the altarpiece. Its figures, far larger than life-size and arranged as if on stage, witness the death of the Virgin and her Assumption into heaven. Never before in a Late Gothic carved altarpiece had this subject been treated in so monumental a manner. 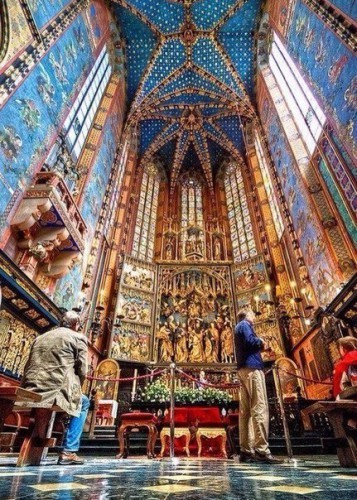 Moreover, the treatment of the subject is unusual. Instead of being assembled at the deathbed, the Apostles stand, deeply moved, around the youthful Virgin as she kneels in prayer. Above them the gate of Heaven stands open with light pouring forth and the Virgin is led through by Christ. Above is the Coronation of the Virgin, where she is attended by two angels and the Polish national saints, Adalbert and Stanislaus. 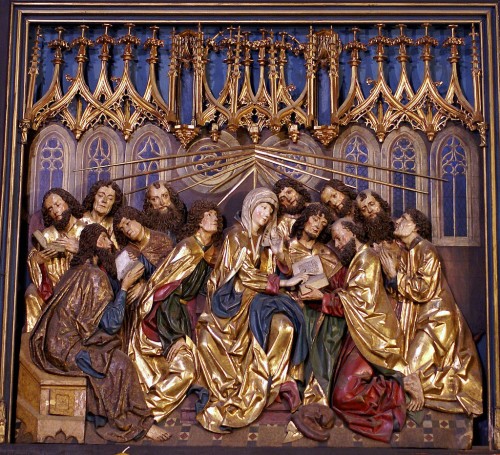 On the predella is a depiction of the Tree of Jesse. The outer wings, which are not movable, are decorated only on the inner sides. When the inner wings are closed a series of 12 reliefs depicting scenes from the life of the Virgin and life of Christ are visible. When the wings are open, the left-hand one shows the Annunciation with, below it, the Birth of Christ and the Adoration of the magi while on the right, the reliefs show the Resurrection, the Ascension, and the Descent of the Holy Ghost. 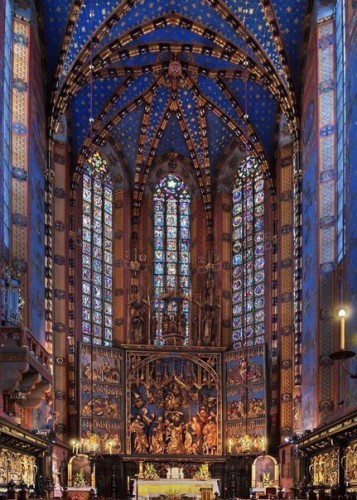 The sculptural forms used shows three main gradations. From the bas-reliefs on the outer sides of the wings it moves to high relief on the inner sides and culminates in the almost fully rounded figures of the death scene. This increase in three-dimensionality is accompanied by a corresponding heightening of the colouring: the colourfulness of the outer edges is steadily reduced toward the centre in favour of an increase in gilding. 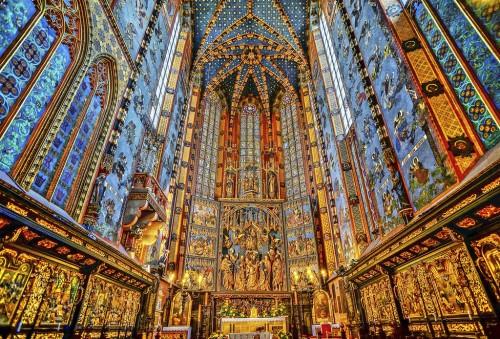 In the allegorical interpretation of colours in the Middle Ages, gold was accorded the highest place. As the most valuable and most incorruptible metal, gold symbolized the light of heaven, in whose rays the figures of the death scene are bathed. At the same time it represented eternity, the idea of which is present in the Virgin’s entry into Heaven. 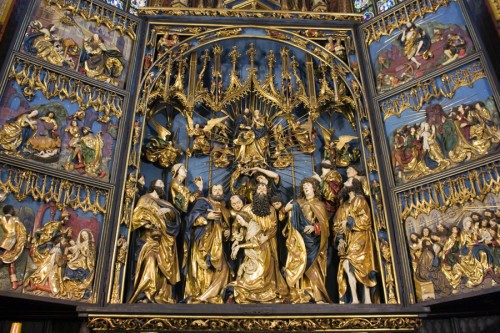 The blue of the background also had symbolic significance: it is the colour of the sky and therefore of Heaven, and so symbolizes divine truth. The sculptural treatment of the faces, on the other hand, reveals the carver’s outstanding ability to observe nature and his skill in translating what he has observed into an image. Each figure is given the character of an expressive individual portrait, an expressiveness heightened by the colouring.