Home Events Motion An Anti-Smartphone With a Rotary Designed and Built by Space Engineer Justine... 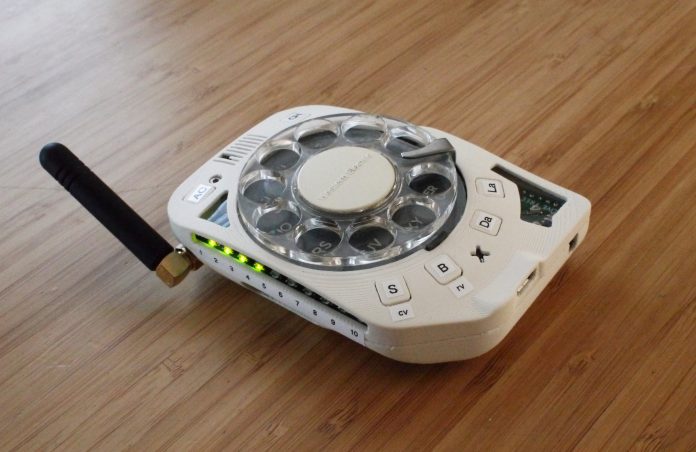 Justine Haupt, a developer of astronomy instrumentation at Brookhaven National Laboratory, spent the last three years developing a device that strips away all of the non-phone functions of modern smartphones. The Portable Wireless Electronic Digital Rotary Telephone (aka Rotary Cellphone) does not have a touchscreen, menus, or other superfluous features. It fits in Haupt’s pocket, and it makes calls.

The first version of Haupt’s anti-smartphone was made using a cellphone radio development board. As the project progressed, she worked out a way to make it compact, to view missed calls on a small display, and to ensure that the device could be taken apart and fixed if necessary. While the Rotary Cellphone may seem like a fun novelty, Haupt (until now a devoted flip phone user) says that is not the point. Everything from the removable antenna to dedicated speed dial keys for her husband and other contacts is utilitarian and a direct contrast to the devices many of you are reading this article on right now.

“This is a statement against a world of touchscreens, hyperconnectivity, and complacency with big brother watchdogs,” Haupt writes on her website. In a post sharing the open source design, she adds that “in a finicky, annoying, touchscreen world of hyperconnected people using phones they have no control over or understanding of, I wanted something that would be entirely mine, personal, and absolutely tactile, while also giving me an excuse for not texting.” (via Kottke) Bachfest Review – Thunderbolts, a Lovers’ Stand-off and Moments of the Sublime