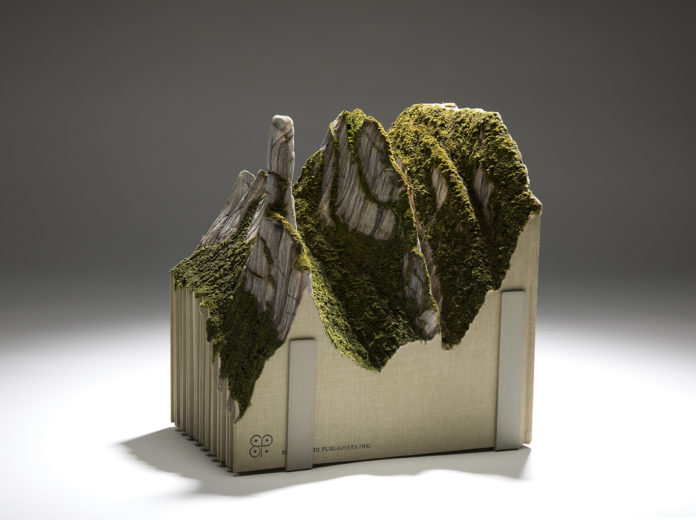 There’s a well-known saying that you shouldn’t judge a book by its cover. For Guy Laramée, though, a books’ contents aren’t the only important aspect either. The Montreal-based artist repurposes encyclopedic volumes and series of dictionaries to create topographic carvings that dip into and excavate the pages, framing the physical object as a work of art in itself. Laramée’s latest projects include a piece with minuscule carved steps scaling a mountainside and another with moss-covered ridges jutting up from low valleys. His work titled “Journey to the Center of the” features two side-by-side texts with a cavernous hole bored through them, piercing entirely through to the other side.

In 2018, the artist released a TEDx talk titled “No outside,” in which he considers conceptions of art in an age that fosters a growing addiction to ideas, leaving little room for contemplation. He refers to his text-based projects as being the perfect medium for exploring his “love-hate relationship with intellectual knowledge, (his) critique of the ideologies of progress, and the idea that true knowledge could very well be an erosion,” as he explores questions about the relationship between meaning, emotion, and art, more broadly.

Additional philosophical musings can be found on Laramée’s site, while he shares more of his quarried landscapes on Instagram. Left: “Humanités.” Right: “Journey to the Center of the”