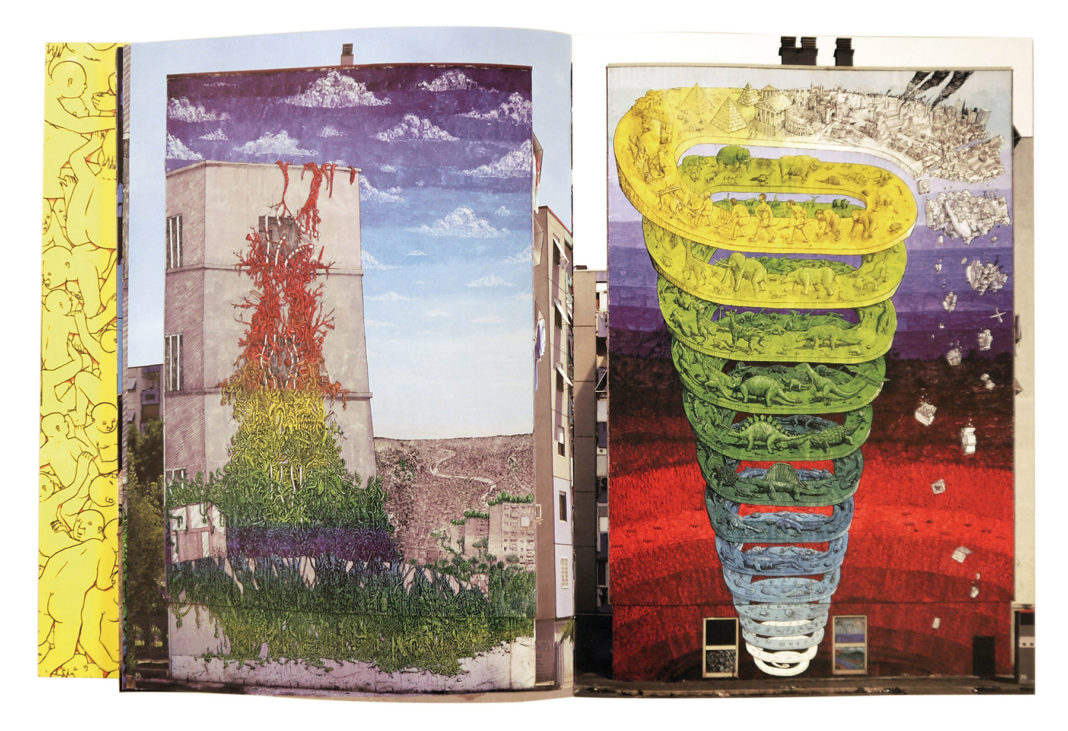 The newly published book Minima Muralia condenses more than 200 larger-than-life murals painted by Blu into one 288-page collection. The compendium covers every piece made by the Italian street artist over the last 15 years, including backstage shots and unreleased works pulled from his archive. A special edition of the book has also been released, featuring a 32-page zine, two posters, and a specially-designed book casing. You can order both releases on Zooo Print & Press. 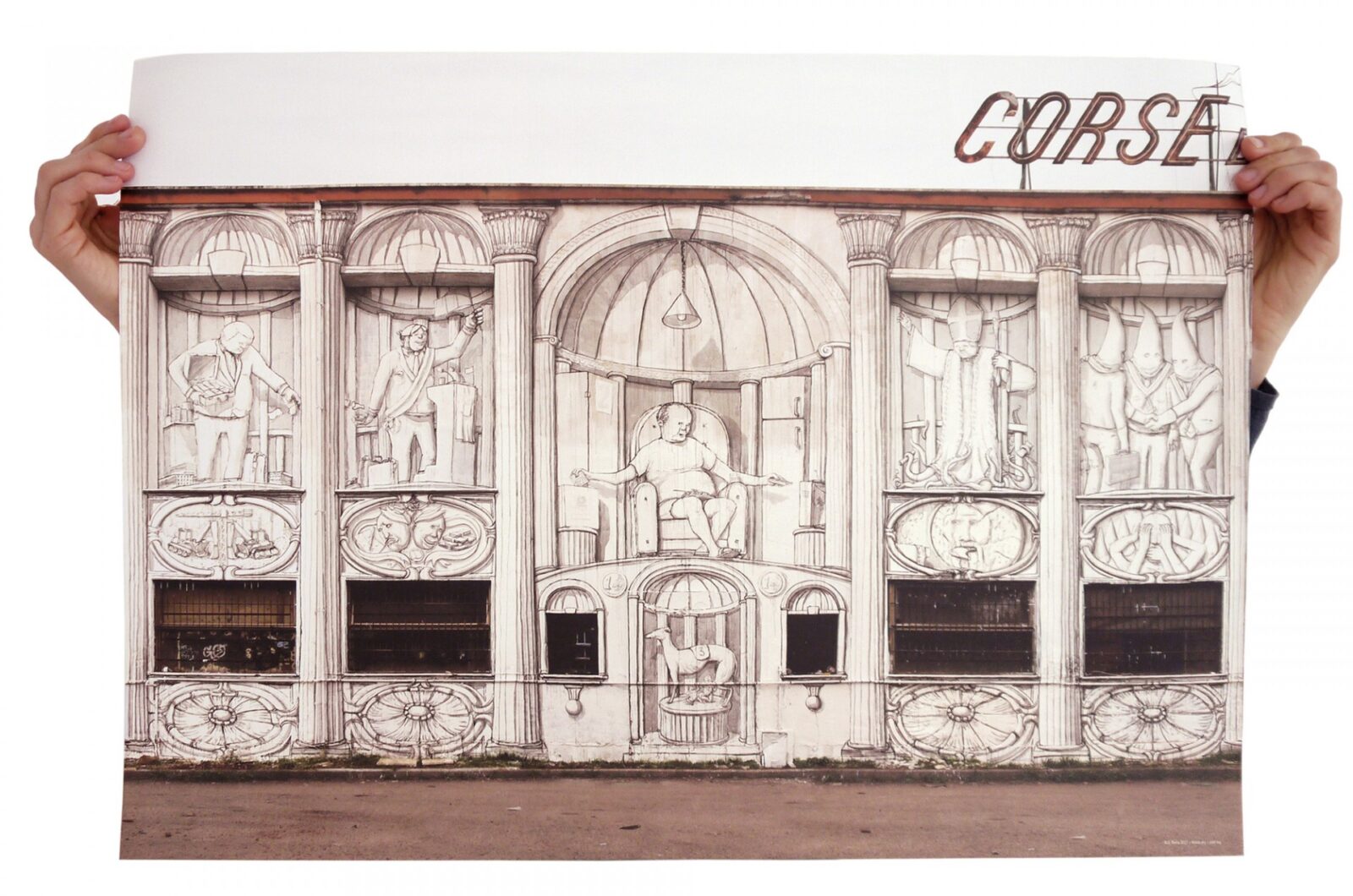 In addition to putting out this recent compilation of his works, Blu has also painted a new mural in the town of La Punta, just outside of Valencia, Spain. The piece was created as a part of the Sensemurs Project, a group of muralists attempting to raise awareness about the preservation of peri-urban orchards in towns affected by rapid urbanization across Europe. You can see this new mural, along with work by Borondo and Daniel Munoz SAN, over on Juxtapoz.

Blu is an Italian street artist that currently lives in Bologna, Italy. He started painting in a capital of Italy’s Emilia-Romagna Region and has been involved in the street art scene since 1999. 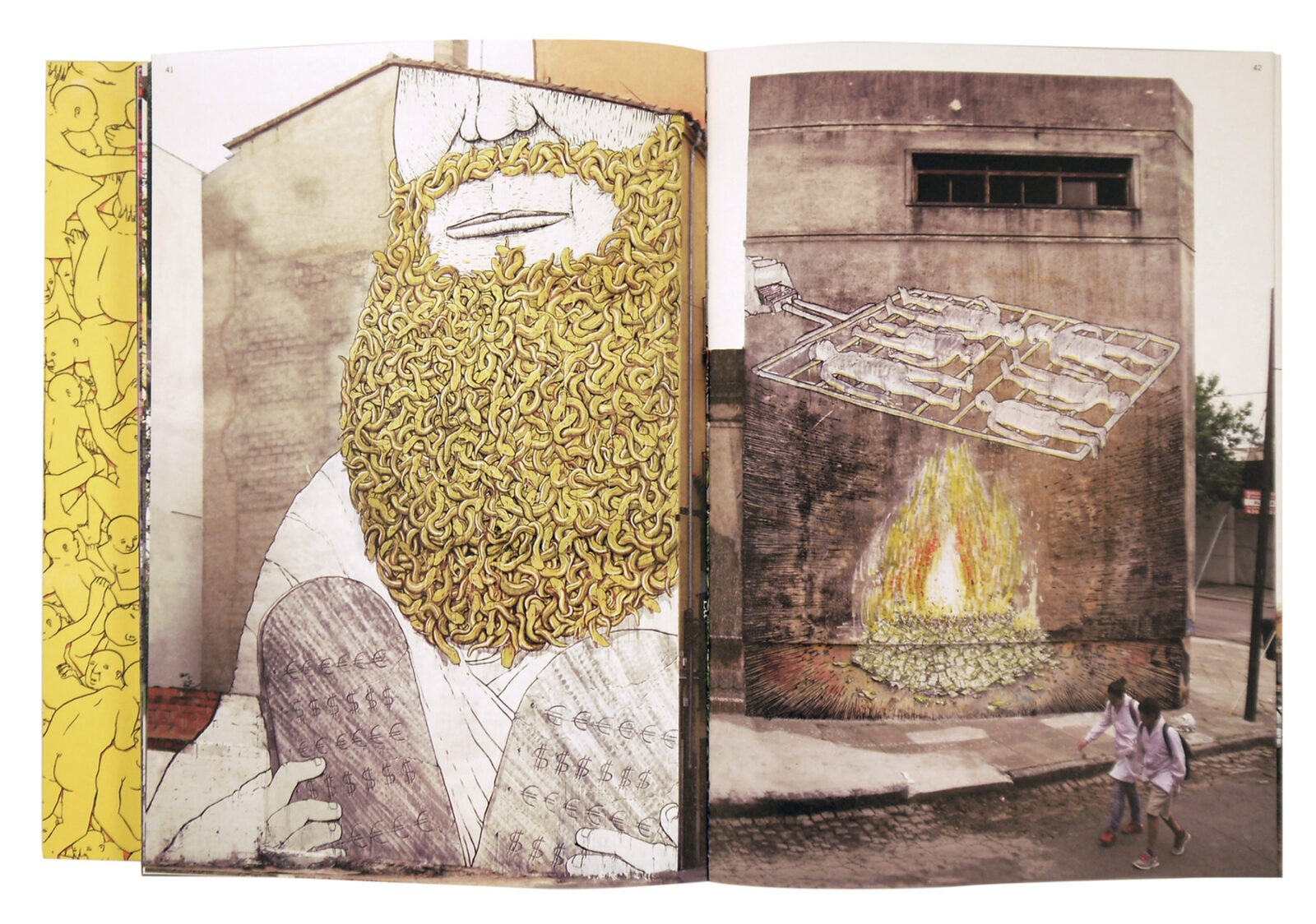 His works can be seen through the world and his style is easily recognizable. They are known to be “epic scale murals.” Blu prefers to paint his works around the urban and industrial landscape. 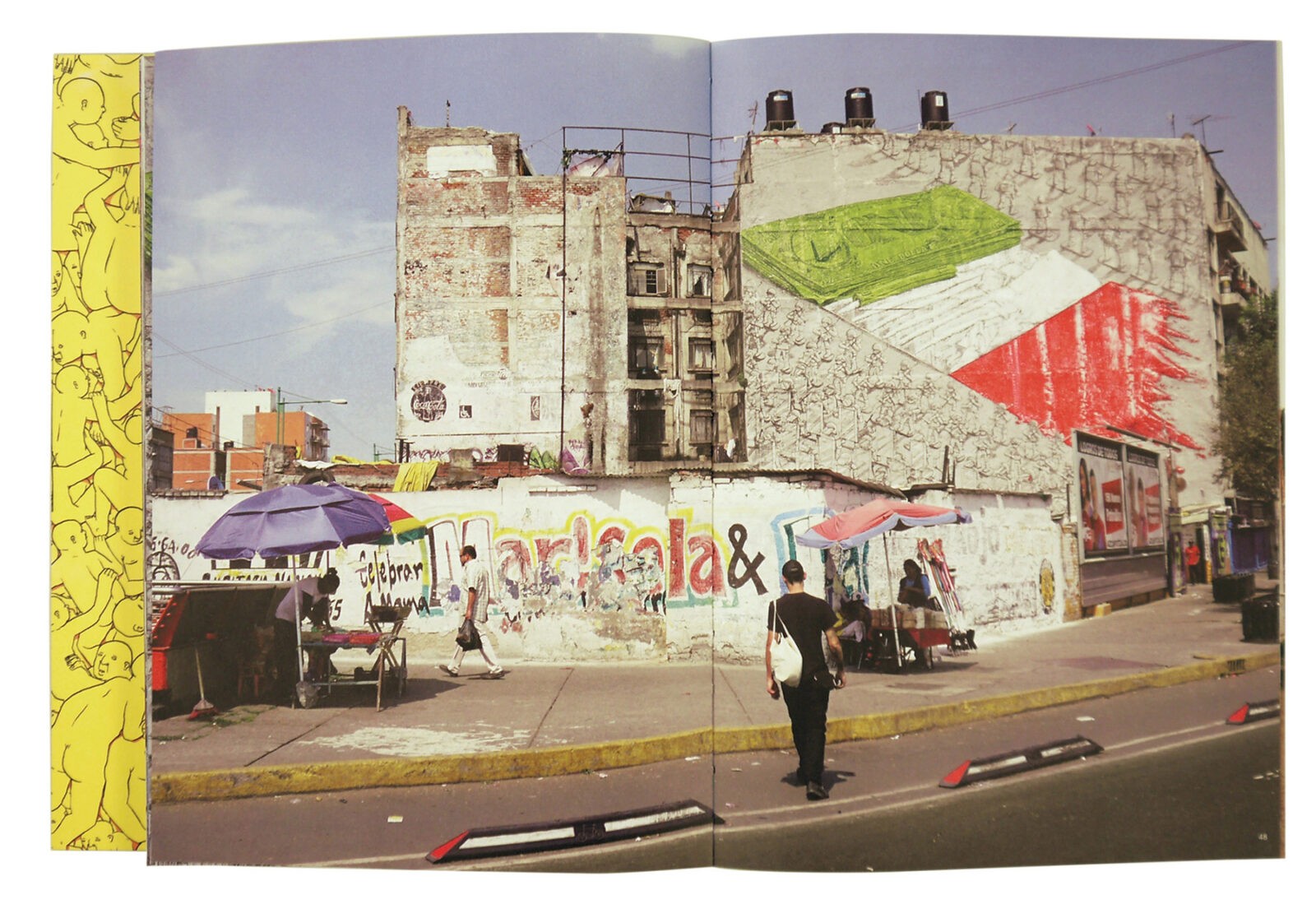 Like most street artists, Blu began painting graffiti with spray paint. He quickly gained recognition and fame by painting a graffiti series in the suburbs of Bologna. Over the next few years into the early 2000s, Blu’s graffiti style transformed thanks to his growing use of house paint. 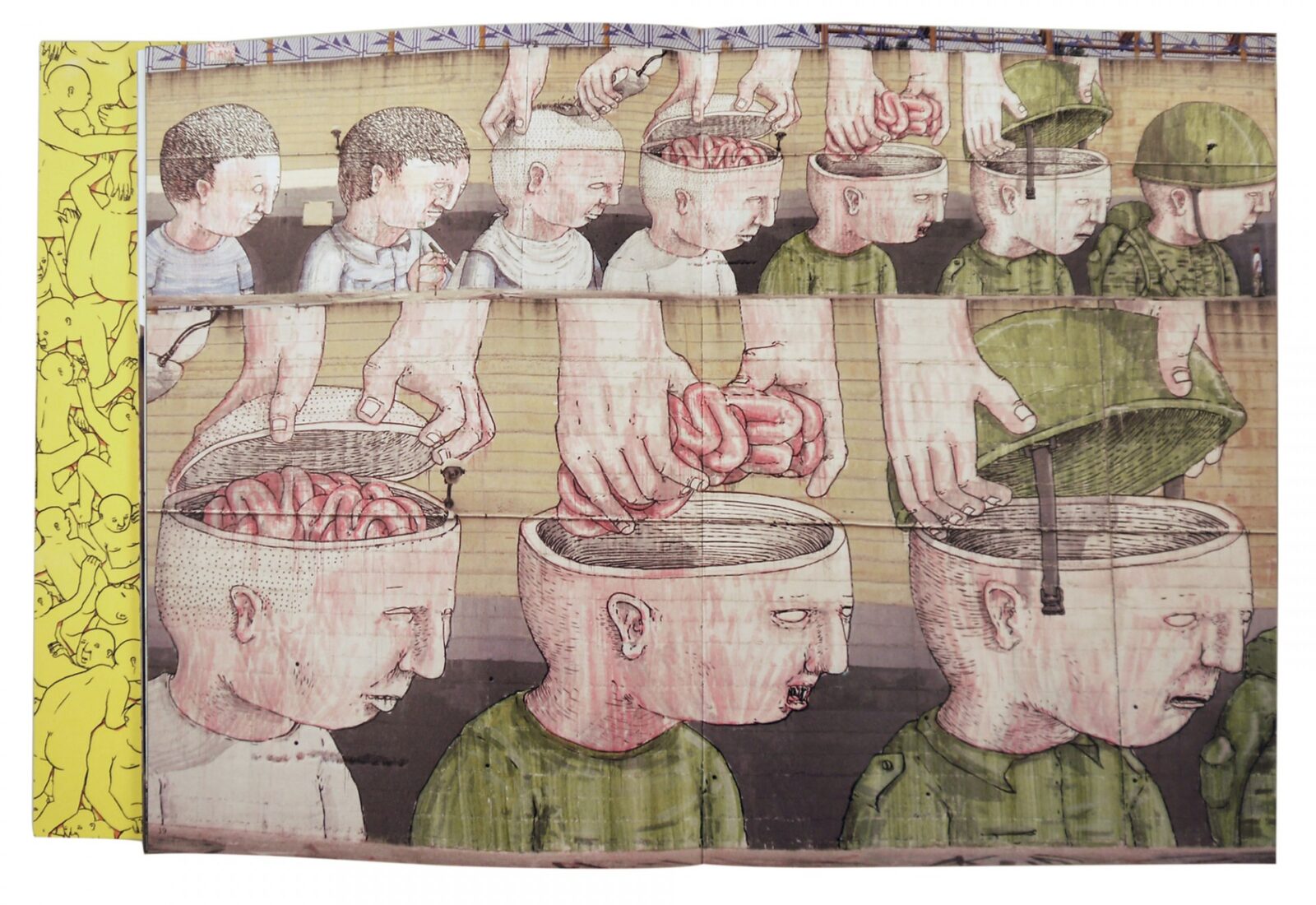 He began to experiment with paint rollers and telescopic sticks. Not only was his graffiti art much larger, but his art conveyed a much more dramatic appearance. He quickly began to create huge human figures that were often sarcastic in appearance and resembled comic and video game art.

Strongly influencing Blu’s early career were team efforts with other street artists like Dem, Sweza, Run, and Ericailcane. This camaraderie focused on establishing creative participation and helped lead to Blu’s experimentation with digital animation. He participated in many artistic endeavors with Ericailcane from 2003- 2006 which also helped him gain large recognition. 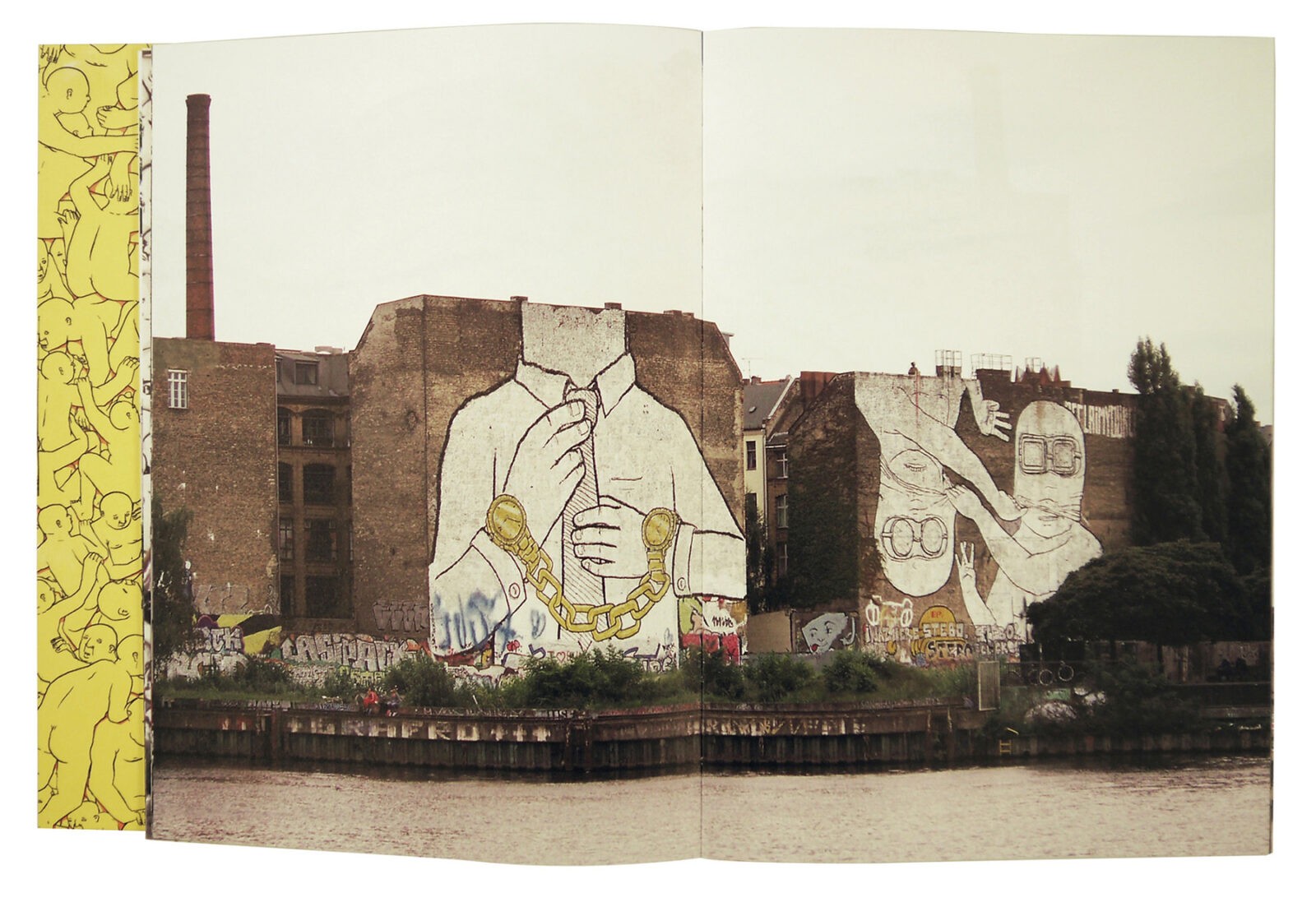 In 2005, Blu had the opportunity to travel to many destinations and was often invited to art festivals. At these festivals, he painted with other great artists from the across the world, and even landed a spot in a festival called “Murales de Octubre” which was done in Managua, Nicaragua.

The street art mural that he made in this location was very significant because wide audiences across the Internet were able to view it. The mural was quickly named “Hombre Banano”, since it pertained to the protests of workers in the banana plantations.

Over the next couple of years, Blu spent his life traveling and painting across Central and South America, where he visited countries such as Mexico, Guatemala, Costa Rica, Argentina, and Brazil. 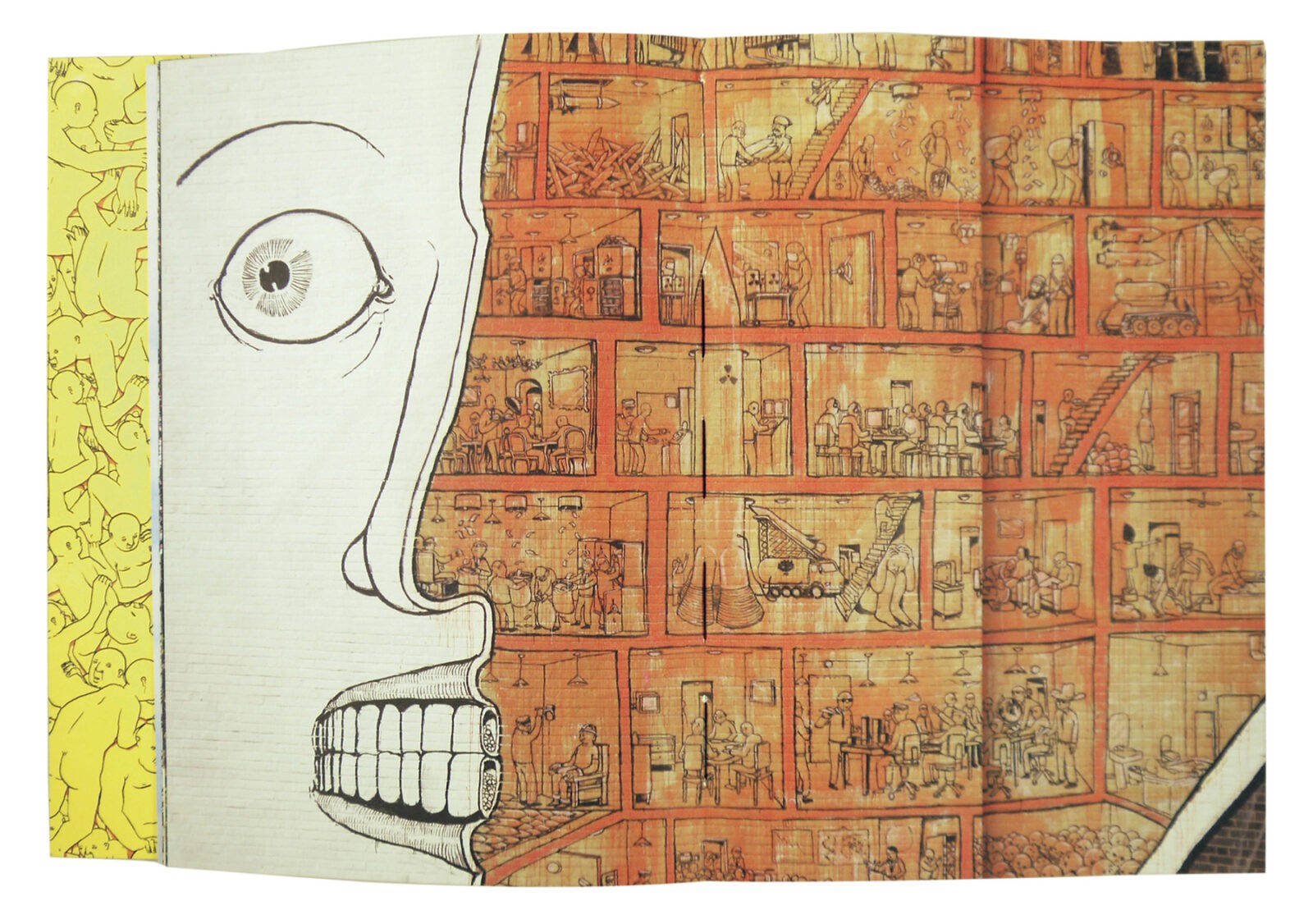 Blu’s most famous artwork culminates in a silent graphic animation composed of hundreds of paintings on walls that apply to a seven minute animated mural. This incredible video is called Muto, and can be found on YouTube with millions of views.

This video took many months to create and was painted in the streets of Buenos Aires, Argentina. Because of its importance, this work has also won many awards. 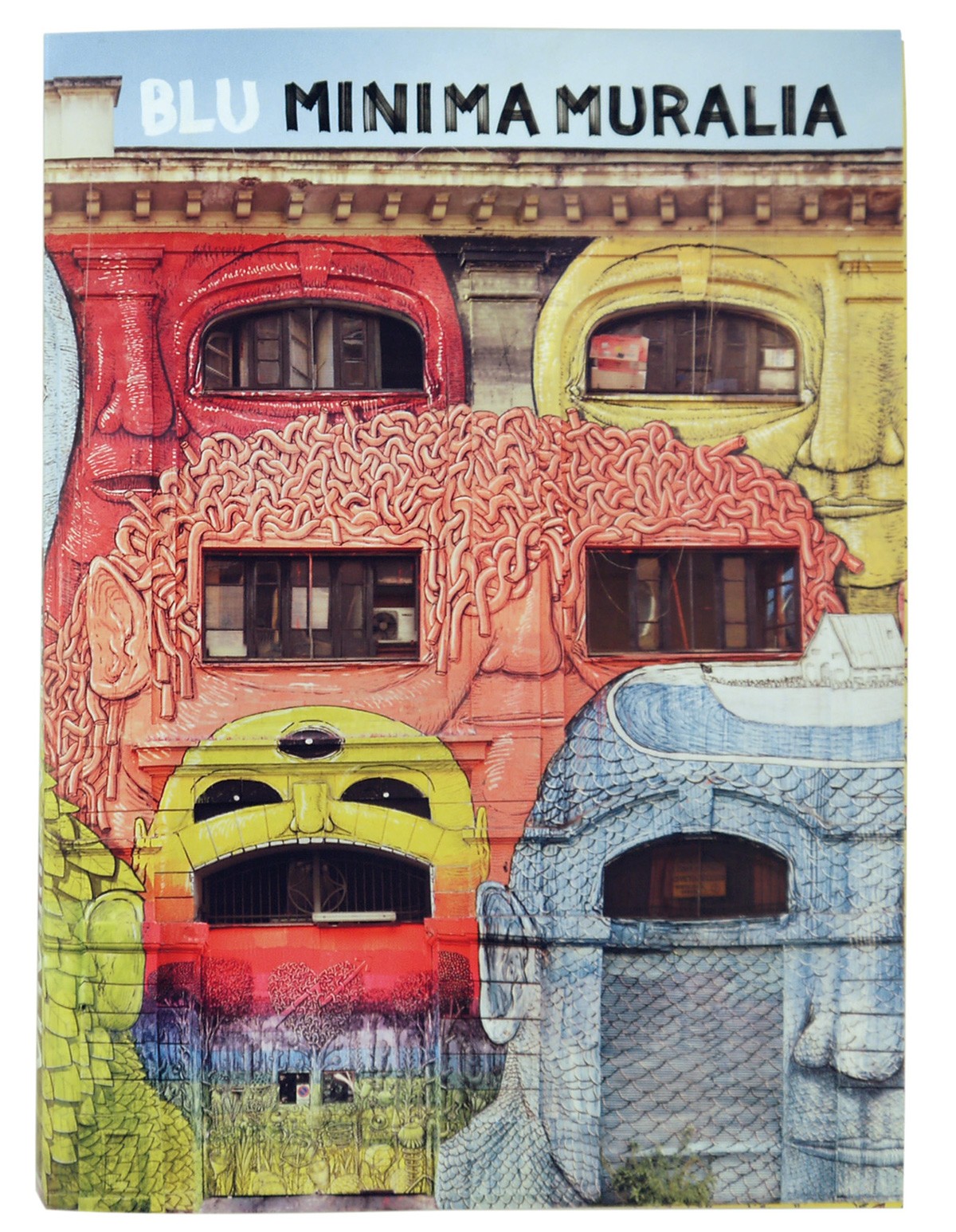 Blu’s aesthetic search is motivated by a belief in an open source philosophy. His amazing work stands as truth against political events and other socialistic controversies in today’s modern age.