Home Events Motion Trap for light. “The Art of Painting” by Jan Vermeer 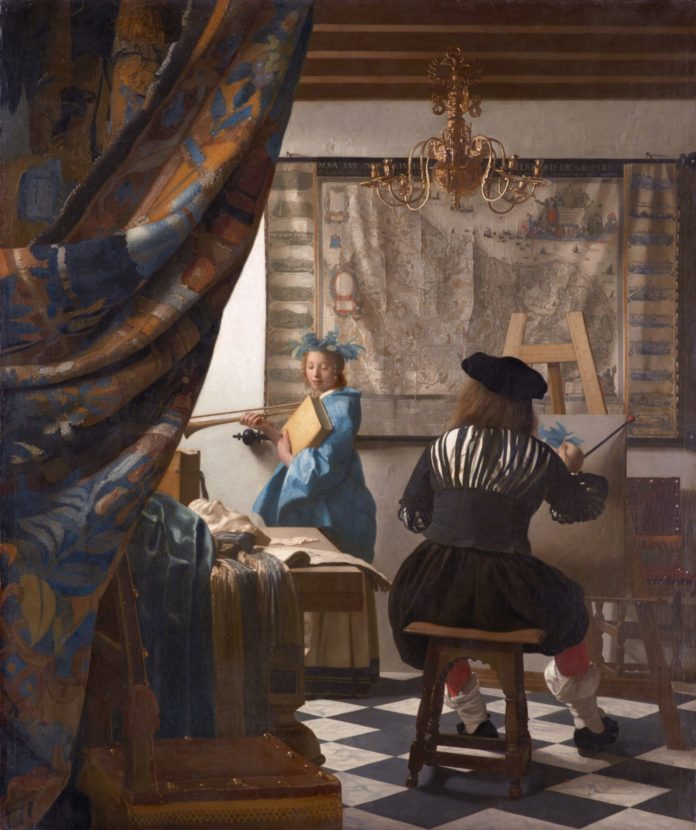 Painting is a trap for time. The moment that forever could be lost in history, eventually becomes immortal, becomes the property of eternity. At first glance it seems that the canvases of Jan Vermeer are absolutely realistic. But it is not so. The artist always aspired to the hidden symbolism and achieved in this amazing skill. We know little about his life, perhaps, too little, but some facts are still known.

In the Netherlands in the XVII century the attitude to painting was completely different than now. About any minimalism in the interior speech was not. The richer the family was, the more paintings were to adorn the walls of the native nest. And what paintings could interest rich merchants? Household scenes, the most simple, clear to all – it is these pictures are best sold. There were a lot of artists, so everyone fought for the clientele. In Delft, the hometown of Vermeer, almost everyone who had money could enter the painter’s studio. The studio looked like a shop, not a temple of art.

Strange, but it is from this consumer attitude to painting that one of the best paintings in the history of the world of fine art was born. Once in the studio the French envoy came to the artist. He asked Vermeer to give examples of his works, but the master did not have a single picture at that time. He wrote the address of one of his customers, said that examples of works can be seen there … The customer did not return. Then the artist decided to create a canvas, according to which anyone who came to him in the studio, could understand what a painter is capable of. Thus was born the “Art of Painting”.

This canvas is an amazing text. One of the greatest paintings of Vermeer, who always preferred a small form. In this picture was in love with Adolf Hitler, during the war, hid it in a vault in a salt mine near Munich. We see the model, we see the artist sitting at the easel with his back to the viewer. It seems nothing unusual, it’s simple and clear, but it’s not. It is amazing not only the skill of Vermeer (in the image of light he was not equal), and the symbolism of the picture is interesting. The curtain is raised by the invisible hand of the viewer. As if specially for us in the right corner of the canvas is a chair, inviting us to sit down and look at how the story is going on. Yes, it is history, because the model in a blue raincoat, holding a pipe and a book in his hands, is not just a girl. She is one of the muses, to be more precise, Cleo is the muse of history. The artist managed to transfer to the canvas only a laurel wreath from her head – a symbol of glory. And the model is already in impatience. Of course, they try to trap her, to leave her on the canvas forever. Our eyes slide further, and on the wall we see a map of the Netherlands. In the middle of it is a crack. This is also not accidental. Before us is the border that divided the United Provinces of the Netherlands, in which, after the revolution, the republic was proclaimed, and the rest of the territory of the country left under the rule of the Spanish crown. There is another story related to the story in the picture – a chandelier. It is decorated with a double-headed eagle – the arms of the Habsburg family, the rulers of Spain. But there are no candles in the chandelier – their reign is already in the past. But all these are details, trifles. The history changes, it is forgotten, the moment leaves without a trace. She will stay with us only if she can catch him in a cage. And Vermeer’s painting, perhaps, is the best cage in which history could turn out to be. At the end of his life, bogged down in debt, Jan Vermeer still did not want to part with his picture, which rightfully considered his highest achievement. After the death of the master, his family unsuccessfully tried to save her from the gaze of creditors. It did not work out. The painting disappeared in private collections for more than 100 years, until it was sold in 1813. Only here the name of the master has been changed. Vermeer at that time, almost all forgotten, so the canvas was attributed to Peter De Hoh, whose paintings were valued much more, even forged his signature in the corner. It did not work out. “Art of painting” eventually returned to its creator.