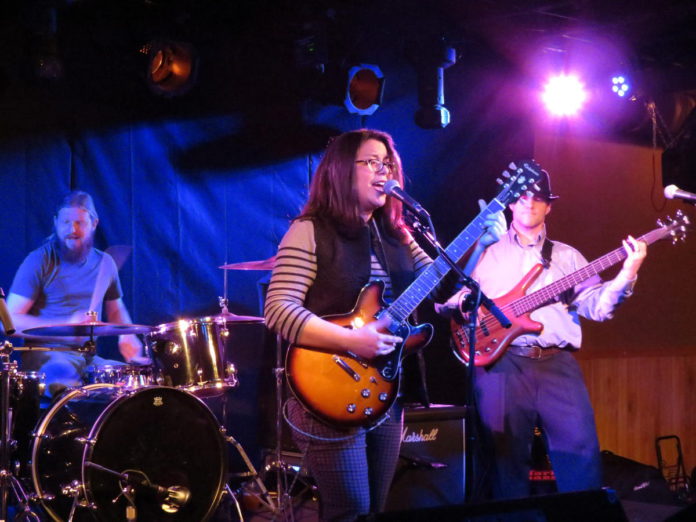 The blues has always been a staple in Kalamazoo. But when the 411 Club closed three years ago, its blues jam – that predated the club – ended too.

“Once it closed down there wasn’t really a regular hangout for that genre of music,” says Marissa Aguirre of the band Blue Veins – also known as Little Mo.

While that’s happening, people sign up to play. They fill out a questionnaire that asks them things like: What instruments do you play? How long have you been playing? Aguirre says they’ll usually add a funny one too like, “What’s your sign?”

Then, Duross says, it’s time for the members of Blue Veins to play matchmaker. They have to put the right combination of people and instruments on stage.

“Depends on how many people show up – how many musicians show up, different skill levels of the different instruments. You don’t want to have all of your novice players together on the same set so we try to have a mix,” says Aguirre.

For beginners, jamming with seasoned players can make you a better musician. But Duross says even very technically skilled players can learn something from a jam. He says it teaches you to adapt to songs and styles of playing that you’re not familiar with.

“It’s something I don’t think you can really get from sitting and practicing at home to a metronome. You know being able to interact with other people on the fly in front of a live audience with a song you’ve never done and try to pull it off,” says Duross.

Duross says the Blue Veins jam is kind of like a reunion. You can see members of local blues bands and old jam buddies come together in one place.

“A lot of these people that come by, I’ve known them for ten, 20 years and I’ve played with them since I’ve first starting out,” says Duross. “It’s not just a musical gig like other musical gigs that I have, but it’s also a get together with friends, almost family every week.”

Aguirre says what they really want to see is new, young faces. She says many of the great blues musicians in town tend be older and don’t go out as much:

“And that’s a big part of why a lot these jams aren’t continuing on as long as we would like. So it’s kind of a part of our goal being our average age of the band a lot younger than some of the other ones, we kind of want to try to influence that a little bit and try to draw the younger crowd so that we can keep things going.”

Aguirre says getting young people into the blues shouldn’t be that hard. In fact, they probably like the genre already:

“Blues has influenced rock n’ roll and other forms of music. And a lot of times people hear songs on the radio that are actually blues tunes and they don’t realize that they do, in fact, like the blues. So getting to hear it live makes a big difference too because you can listen to it, you can dance to it, you can live your life to it.”

Aguirre says yes, there are great blues artists like B.B. King and Muddy Waters, but there are also modern takes on the blues too – bands like The Black Keys and The White Stripes.