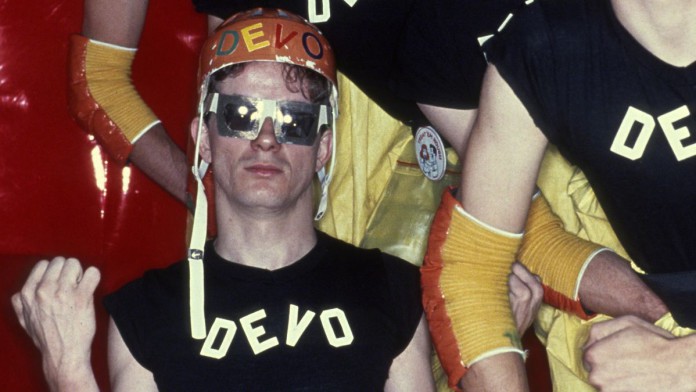 Midwestern hardcore has always been for the weirdos. Compared to its coastal cousins, which dealt largely in hyper-speed or chest-thumping aggression, the punk bands of the Midwest have intentionally pushed themselves to the fringes. In Chicago, groups like Naked Raygun dealt in herky-jerky rhythms and guitars that sounded like a chainlink fence scratching against concrete, while The Mentally Ill’s most popular song features the line, “They’re fucking your kids now.” In Michigan, bands like The Meatmen lived to antagonize their audiences, while Die Kreuzen was incorporatingelements of metal and goth seemingly to alienate fans of both genres. And before all of them, there was Devo.

Formed in Akron, Ohio in 1973, Devo wouldn’t release a proper album until five years later, but that didn’t mean the band wasn’t hard at work. As the pair of Hardcore Devo compilations proved, in those early days the group was already pushing its sound to the outer limits of what was then perceived as music. When the band finally released Q: Are We Not Men? A: We Are Devo, the term “new wave” was already bouncing around—a journalistic shorthand for bands that were punk-adjacent but embraced synthesizers and finer productions—and it stuck. Still, it never fully captured the aggressive agit-prop in Devo’s origins, which were formed around the concept that mankind was “de-evolving” to a primitive, stupid state, with the band singing audience-baiting songs like “Jocko Homo” and “Mongoloid.”

Even as Devo found commercial success on the back of hits like “Whip It” from 1980’s Freedom Of Choice, it remained willfully subversive and weird. Devo’s members dressed in radiation suits and energy dome helmets, offering songs that mixed science-fiction fantasy with sardonic social commentary. It was the kind of band that would inspire many imitators—and Halloween costumes—though few ever matched it. 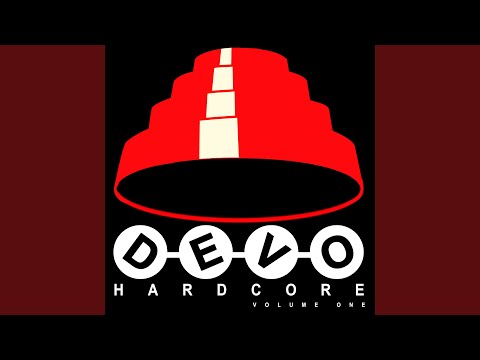 Even today Devo’s influence can be felt—and perhaps most unpredictably, among those hardcore kids in its Midwestern home. Although few have officially embraced the genre name, “Devo-core” has been tossed at it as a placeholder, owing in part to its practitioners’ loving recreation of Devo’s earliest, most manic compositions, while also upholding the band’s sarcastic sense of humor. Like Devo, who invented characters like Booji Boy and would open for themselves in the guise of a Christian rock band called Dove, many Devo-core acts share a penchant for myth-making, only making music on limited-run cassette tapes, playing shows in alleyways and parking lots of fast food restaurants, eschewing a social media presence, and generally doing whatever they can to keep people guessing.

Devo-core’s arguable central figure is Mark Winter, a Northwest Indiana native who’s built a sizable discography with a myriad of interrelated projects. I first stumbled across Winter at a house show performance with his band Guinea Kid, which was actually covering Devo songs at the time. Winter’s later band, The Coneheads, was the first of the scene’s many groups to start getting wider attention.

The Coneheads released a pair of cassettes in 2014, Canadian Cone and Total Conetrol, and though it took some time, a buzz began to build to the point that the tapes began selling for $100 each on Discogs—even landing a positive review on Pitchfork. Coneheads songs were jittery little dadaist pieces, each played at warp speed and perpetually on the edge of unraveling. Lyrically, the band took aim at the usual things punk kids despise—like big cities and the people who live in them—while offering up robotic, dehumanized covers of the Talking Heads. And while no band had yet to self-identify as being a Devo devotee, The Coneheads would break the mold with the tongue-in-cheek title of its first record: 14 Year Old High School PC-Fascist Hype Lords Rip Off Devo For The Sake Of Extorting $$$ From Helpless Impressionable Midwestern Internet Peoplepunks L.P. 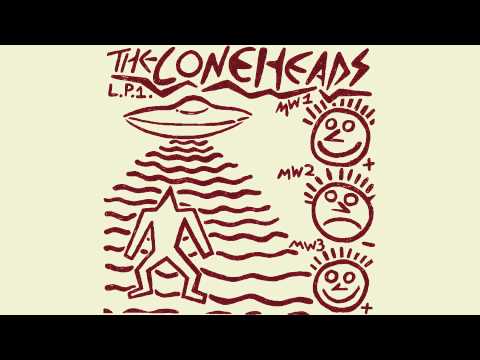 Some 300 miles away in St. Louis, another bunch of misfits was making its own sound that ran parallel to the one centered around Winter. In 2012, Lumpy And The Dumpers would release their first demo as the debut release on Lumpy Records. The band’s frontman, Martin Meyer—who, you guessed it, prefers to go by Lumpy—was a fervently DIY sort who would hand-draw his own crude pictures on the covers of each edition. Lumpy Records soon began releasing tapes from like-minded bands regardless of location, creating another arm of the Devo-core scene.

Although The Dumpers weren’t as new-wave-indebted as The Coneheads (Lumpy would save that for his other project, The Wad), Lumpy Records would forge a commonality between these Midwest miscreants and bands like Australia’s Ausmuteants and Massachusetts Unochromes, all of which found the sweet spot between new wave’s arty angst and hardcore’s impassioned velocity. In five short years, Lumpy Records would put out nearly 90 releases. 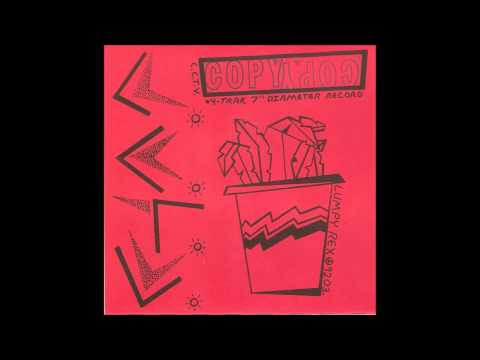 While Lumpy was busy documenting these emerging hybrids of spastic, lo-fi new wave and hardcore punk, Winter was spinning off new bands left and right. Where The Coneheads sound like Devo records played at 45 rpm, Winter’s other projects opted for greater subtlety. C.C.T.V. tapped into the art-punk of late-’70s New York, only played with the fury of a band born and raised on Black Flag. It was as if someone took Blondie tapes, popped them into a tape deck, and held down the fast-forward button—a danceable groove, but so mutated that it calls for a violent, flailing two-step.

Around this time, Winter moved to playing drums for Liquids, a band fronted by his Coneheads/Guinea Kid mate Mat Williams that sounded not dissimilar to those other projects, but with a slightly more human touch. Where The Coneheads did everything in their power to avoid sounding human, Liquids embraced the simple pleasures of pop. It’s still brash and snotty, but as evidenced by the recent “More Thana Friend” 7-inch, the band can also turn in the kind of lo-fi pop that’s not that far off from Guided By Voices’ dime-store best.

Keeping track of such an ever-shifting, incestuous scene isn’t made any easier by those bands’ proclivity for tossing their music into the void via limited-run cassettes. But the scene found its most active documentarian—and most Devo-like mythical character—in the archivist known only as “Jimmy.” The mysterious, mercurial Jimmy began uploading rips of these cassette tapes to YouTube, pairing them with a lengthy description full of lingo that he seemed to be inventing with each stab of the keyboard. Jimmy’s rambling write-ups lent insight to the scene’s growing fandom, augmenting these eight-minute bursts of music with thousand-word dissertations loaded with doublespeak, cryptic clues about his own identity, and (likely apocryphal) stories about how he’d acquired these precious tapes.

Adding to Devo-core’s growing intrigue, when Noisey interviewed Jimmy, he stayed completely in character, never tipping his hand as to who he was or how, exactly, he was involved in the scene. But beyond contributing to their sci-fi elusiveness, his work as curator and tastemaker via the uploads and monthly mixes on his YouTube channel offered various entry points into bands united by similar styles across the country, giving neophytes plenty of new acts to discover from here unto internet eternity—even if he’s hinted that “Jimmy” isn’t long for this world.

Of all the Devo-core groups that found (relative) fame thanks to Jimmy, none have taken the sound—and the Devo aesthetic—further than The Minneapolis Uranium Club. Featuring members of defunct hardcore bands like Iowa City’s Nerv, Uranium Club is the genre’s most polished and most inventive practitioner—as well as its most deliberately elusive, given that it seems to relish in changing its name solely for the sake of building an arcane history. Like Devo, its lyrics are darkly satirical, while even the band’s staging harkens back to Devo’s early campiness and sense of iconic design, occasionally featuring a hypnotic circle spinning in the background.

Much like Devo’s Orwellian satires on Duty Now For The Future, Uranium Club also bucks hand-drawn cartoons for imagery that mimics propaganda for a massive, multi-national corporation. Its releases come with obscure ephemera, featuring artwork that serves as advertisements for fake products, and pair them with pamphlets that unfurl a sci-fi origin story dating back to the 1950s.

Given that the scene’s gained most of its traction through the internet, it only makes sense that even more Devo worshippers would begin taking up the Devo-core cause outside of the scene’s established pockets. Nova Scotia’s Booji Boys even borrow the name of Devo’s beloved man-child mascot; although their sound skews more toward the garage-punk of The Marked Men, the group wears the mark of Devo proudly. They might not sound as dehumanized and alien as some of their peers, but the Booji Boys’ songs are similarly marked by chaotic blasts of fuzz that bleed together into one big melodic mash, showing that Devo-core’s sound is increasingly elastic.

While none of the scene’s acts seem destined to find a “Whip It”-sized hit and become the same sort of unlikely massive, crossover band, they’ve seized on Devo’s principles of turning its small, insular niche into a flourishing way of creating. Hardcore has continued to exist and splinter into countless sub-genres over its many decades, and Devo-core might be its most active and obscure subdivision yet. Even if the many players involved might balk at the media lumping them together under that name—or any sort of coverage that might intrude on the preferred secrecy of their society—they’re all part of the same beautiful world of weirdos.