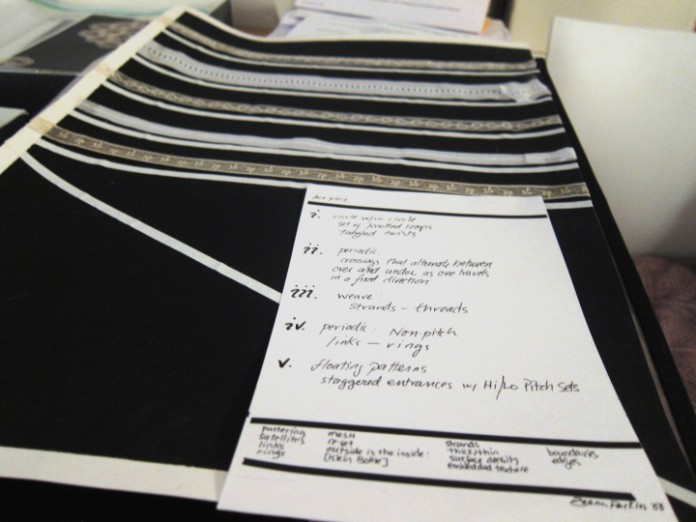 Delicate and fine, Shetland lace was made popular in the 19th century by British royalty — most notably Queen Victoria, who sported shawls and stockings knitted from the soft fabric. Earlier this year, while visiting Glasgow, the harpist Zeena Parkins first learned about the knitting tradition and its many patterns, and she found herself transfixed by the rhythm of their intricacies.

“As soon as I saw the patterns, I said, ‘These are scores,’” Parkins told me recently. She saw them, specifically, as musical scores — and she has indeed since created a dozen or so compelling compositions inspired by the lace. They make up what she calls the Shetland Movement, which is just the most recent division of LACE, her ongoing, incredibly considered project that translates the visuals of lace fragments and knitting charts into notation for instruments.

Initially began in 2008 as a commission by the Merce Cunningham Dance Company, LACE has grown and transformed just like a garment stitched from its namesake fabric. (Parkins’s own collection of lace, too, has grown to incorporate fragments from Spain, France, Belgium, German, Austria, Turkey, and other countries.) The Shetland Movement is its third iteration and its most specific, with Parkins paying very close attention to the details within lace patterns rather than considering their more general forms.

She premiered its compositions earlier this month at Roulette, in Brooklyn, and intends to record the entire movement in January. For the performance, accompanying her electric harp was her band Green Dome, which consists of drummer Ryan Sawyer and composerRyan Ross Smith, here, on piano. While lace is soft and flimsy, the sounds the trio produced were largely raucous and forceful: they were vehement, jazz-leaning numbers that involved Parkins striking strings to produce undulating, metallic rattles, or plucking them to create more dampened, melodic tunes, backed by Sawyer’s controlled but unyielding clangs of cymbals and Smith’s piano work, which ranged from soft tinkering to a frenetic collapse of the keys. At times, the score sounded like the result of taking a musical staff and shaking it so that the black notes fell into random positions — but they formed steady, repeated riffs that were grounded in larger frameworks, and you quickly perceived the considered patterning within Parkins’s various compositions. They deliver a hypnotic power in repetition; at times, they are like mantras, edging on the meditative.

These compositions emerge from the very specific way Parkins has developed to read certain Shetland Lace knitting patterns. She chose them from a book, drawn to evocative names such as “Feather and Fan,” “Spider’s Web,” or “Eyelid Insertion.“ Just as music is arranged on a staff and read through its own notations, the patterns are all based on a grid, dictated through knitting symbols. Parkins saw every stitch as having a musical meaning and essentially created her own code that translated the particular symbology of lace into the language of music. She gives each instrument a certain section of the lace pattern, and considering the proportions and complexities of patterns, assigns notes and beats to stitches. The final scores read during performances are the geometric patterns, annotated, rather than traditional staves. They serve more as an open framework to the performance, allowing the musicians to bring in their own readings of the instruction while sticking to similar gestures and remaining aware of a particular piece’s limitations.

“Often the simplicity of the results is startling,” Parkins said. “But adhering to the codes of the patterns creates a kind of grounding to the pieces that feels like a sturdy bedrock. The Shetland Movement explores the language used to designate stitches and translates this coded language into musical strategies, pitch sets, and rhythmic constructions.

LACE not only reflects the patterns of the fabric but also reminds of the physical act of sewing. The concentration and deliberate gesture of Parkins and Green Dome echo the labor behind the careful, decorative designs. The precise tugging and releasing of harp strings, for instance, or steady beating of drums to create phrases that played over and over again were visible echoes of the strenuous effort and hours devoted by unidentified hands to form luxurious items. Even hearing sections such as the ascension or descent of scales alluded to the rhythmic weaving of knitting needles; certain rapid, pitter-patters of notes resembled the mechanical song of sewing machines. The grid-based pictographs that guide these lace makers are inherently constraining, leading them to a specific creation — but within these original instructions, Parkins has found unexpected possibility to continuously unravel.

Review: For Love Or Money by Northern Broadsides