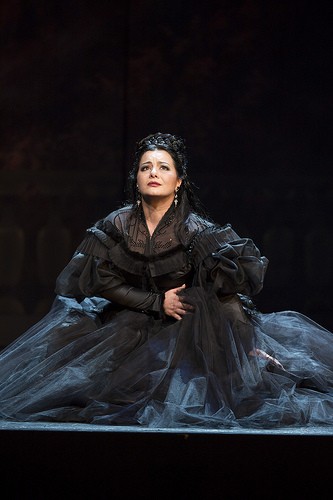 Royal Opera House, London
Stefan Herheim’s take on Verdi is restless, lurid and saturated with the opulence of the 19th-century Parisian opera house to which the action is relocated.

There is – to risk sounding obtuse – an awful lot of opera in Stefan Herheim’s take on Verdi’s Les Vêpres Siciliennes. First seen in 2013 at the Royal Opera House, where it is now being revived under the directorial stewardship of Daniel Dooner, Herheim’s production returns the opera to the historical coordinates of its premiere: Paris, 1855, at the Opera, then the world’s most prestigious venue for the art form.

Gesine Vollm’s costume designs see the heroine Helene in the vast crinolines and near-spherical sleeves of historical portraits of the Second Empire court (they were Opera regulars, of course). Philipp Furhofer’s sets, meanwhile, constitute a rotating sequence of floor-to-ceiling lurid backdrops, a slice of full-size gilded auditorium populated by an on-stage audience, and a wall of mirrors complete with a barre, invoking the Opera’s notorious foyer de la danse – a hotspot of institutionalized ogling, immortalized in paintings by Degas.

The first-night performance hit its stride in Act 2 and was excellent from then on. Driving from the pit, Maurizio Benini’s tempi were brisk, his pursuit of momentum a constant asset. Malin Bystrom was a dark-hued, hyper-authoritative Helene, with an electrifying command of the role’s extravagant ornamentation and a bristling lower register.

In rep at the Royal Opera House, London, until 4 November.