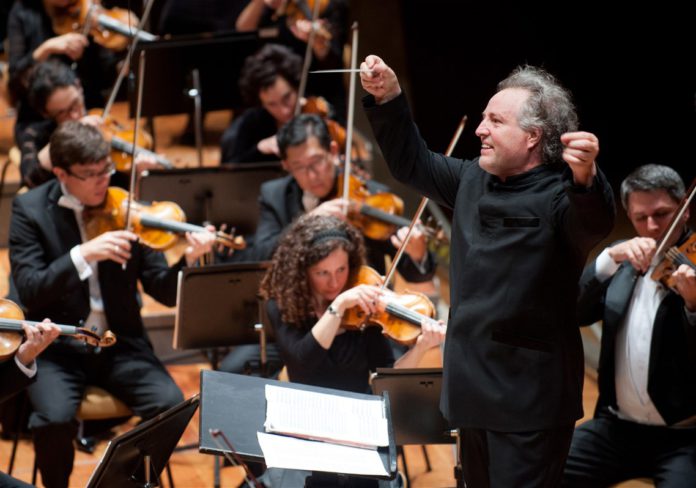 Three local foundations are giving $6.5 million to help the Pittsburgh Symphony Orchestra revise its business plan and broaden its base of donors so the nonprofit can achieve financial stability.

Melia Tourangeau, symphony president and CEO, said the organization’s mission is to make “great music in every life. How we live that obviously means opening our doors to Heinz Hall and making Heinz Hall … a community owned space.”

The largest gift — a $5 million grant from The Heinz Endowments — includes a $2.5 million challenge grant. To receive those matching funds, the PSO must raise $2.5 million in new gifts from individuals, corporations and foundations by the end of the 2018-2019 season. The challenge grant ends on Aug. 31, 2019.

“This is the largest challenge grant to date,” said Jodi Weisfield, chief development officer for the symphony. “This is the formal announcement. From here forward we will be leveraging this challenge grant in everything we do. Everyone who makes a new gift — their gift will be matched dollar for dollar.”

The goal, Ms. Weisfield said, is to raise $75 million for the PSO in the next five years.

Monday’s announcement comes after a difficult year for the PSO. After a two-month strike that began Sept. 30, PSO musicians returned to work and accepted a concessionary, five-year contract that saved the organization $3.6 million. For the fiscal year that began on July 1, 2016 and ends on June 30, 2017, the orchestra’s budget was $31.5 million.

Under the terms of the gift from the Heinz Endowments, the PSO in August will receive $500,000 to use for its “greatest cash needs.”

The Heinz Endowments will give the PSO $1 million in 2020 and another $1 million in 2021 if the organization meets “mutually agreed upon benchmarks” outlined in a five-year financial plan that will be finished in June. Ms. Weisfield said those benchmarks will be established in the next three months.

The Benter Foundation will give $1 million to the PSO over the next four years. Half of that money will go to support “innovative summer programming” starting this year. The money will be given if the PSO meets successful metrics set in a five-year plan for strategic fundraising. The 10-year-old Benter Foundation, headed by board chairman Bill Benter, aims to support leaders, organizations and ideas to help communities thrive.

“Summer programming is something we have been growing,” Ms. Weisfield said. “Our goal is to continue taking it to the next level.”

This summer, Ms. Weisfield said, the PSO will offer some new talent as well as familiar faces, although that line-up has not yet been announced.

Some of the money from the Heinz Endowment and the Benter Foundation will be spent on technology so the orchestra’s concerts are more accessible to listeners, Ms. Tourangeau said.

“We have a lot of content but can’t always get it out the way we want to get it out,” Ms. Tourangeau added.

Eden Hall Foundation has repurposed the remaining two years of a previously awarded operating grant of $500,000. Now, that money will be a challenge grant to inspire donors who give $5,000 or more to increase their gifts.

Ms. Weisfield said the Heinz Endowment and Eden Hall challenge to broaden the donor base will work this way:

If a donor who usually gives $4,000 each year increases his or her gift to $5,000, that will leverage an additional $2,000. The Heinz Endowments and Eden Hall Foundation each will donate $1,000 to the PSO because the individual donor increased his or her gift by $1,000.

“We are looking to grow our base of larger annual gifts to the orchestra. This is a great carrot,” Ms.Weisfield said, adding that in this scenario, a $5,000 gift will become $7,000.

All these grant-assisted initiatives will expand upon efforts already underway by the PSO. For example, to build younger audiences, the PSO had planned to launch a young professionals club in April, Ms. Tourangeau said, adding that those efforts will include FUSE, summer programs and classical concerts.

While the orchestra has a long-standing relationship with Wilkinsburg, it plans to build community partnerships in the Hill District and the North Side to learn, “what are the needs of a community and how the PSO can meet them,” Ms. Tourangeau said.

To achieve that goal, the orchestra created an advisory board made up mostly of community members.

The Heinz Endowments last gave $5 million to the PSO’s “Commitment to Excellence” Campaign, which launched in 2006 and ended in 2011. That money went to the PSO’s endowment, Ms. Weisfield said.

During that previous campaign, the Heinz Endowments also offered a $5 million gift if the PSO could balance its budget but that did not happen.

“It’s up to us to figure out what that means,” she said.