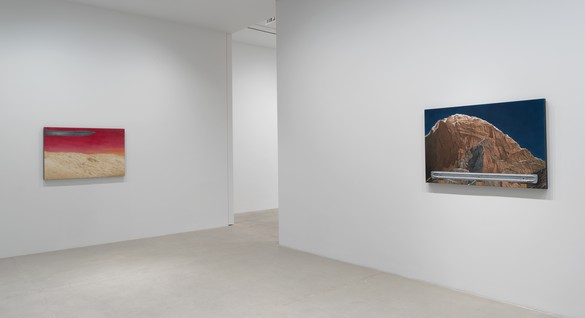 Ed Ruscha’s latest series of paintings is based on the well-established visual vocabulary that the artist has been shaping since the 1960s. Tire treads, torn flags, and desert and mountain scenes reminiscent of traditional landscapes evoke typical American symbols while signaling the deterioration of a nation’s ideals.

At the beginning of his creative career, Ed Ruscha called himself an abstract painter who deals with subjects. Moving away from the academic connotations that have come to be associated with Abstract Expressionism, he instead turned to advertising templates and brought words – as form, symbol, and material – to the forefront of the painting. Working in a variety of media with humor and wit, he oscillates between sign and substance, finding sublime in landscapes, both natural and artificial.

Ruscha’s 1960s paintings explore the noise and movement of the tongue. In works such as OOF (1962–63), in which the exclamation mark is written in yellow block letters on a blue background, it is almost impossible to look at a painting without verbalizing the visual perception. Since his first art exhibition with Gagosian in 1993, Ruscha has held 21 solo exhibitions with the gallery, including Custom-Built Intrigue: Drawings 1974–84 (2017), featuring a decade of reverse-stenciled phrases in pastels, dry pigment, and various food substances from spinach to carrot juice.

The first retrospective of Ruscha’s drawings was held in 2004 at the Whitney Museum of American Art. Ruscha continues to influence contemporary artists around the world, his formal experimentation and clever use of American jargon changing in form and meaning as technology and internet platforms reshape human communication.

Ruscha represented the United States at the 51st Venice Biennale (2005) with an installation of ten paintings, Course of an Empire. The work, inspired by the famous painting cycle of the same name by the 19th-century American artist Thomas Cole, hints at the pitfalls surrounding the modernist vision of progress. In 2018, Ruscha’s Course for Empire was presented at the same time as Cole’s Course at the National Gallery in London.

A figurative painter who developed alongside Lucien Freud and R.B. China, Frank Auerbach became known for his thick, almost sculptural use of paint and bold use of color. This art exhibition highlights Auerbach’s achievements in post-war painting with a selection of his portraits and landscapes.

Artist Frank Auerbach has created some of the most resonant and inventive paintings of recent times, depicting people and cityscapes. He works every day, constantly returning to a narrow range of subjects: landscapes outside his studio in North London and the relatively small number of sitters he will paint on a weekly basis.

The artist is often associated with a circle of figurative artists known as the London School, a term used by R.B. China in 1976 when referring to British artists whom he particularly admired. The exhibitions of this label have featured artists Michael Andrews, Francis Bacon, Lucian Freud, and Leon Kossoff, but Auerbach said he did not feel part of this or any group. After Freud’s death in 2011, Freud’s collection of 45 paintings and drawings by Auerbach was distributed to museums throughout the UK. Learn more about this collection from our last BP Spotlight art exhibition: Frank Auerbach: Paintings and Drawings from Lucian Freud’s Estate.

Shirin Neshat, an Iranian artist based in New York, has explored the concepts of freedom and social ideologies in her photographs and videos throughout her thirty-year career. The art exhibition features a selection of works from the artist’s latest series, Land of Dreams, which focuses on tensions between the United States and the birthplace of Neshat, and draws a parallel between the two countries.

Internationally renowned artist Shirin Neshat takes on rich themes in photography, film, and video work that address gender, identity, and politics in Muslim countries, as well as the relationship between the personal and the political. Neshat collaborated with American artist Larry Barnes on portraits of elderly, low-income Egyptian workers, including mechanics, street vendors, teachers, grandmothers, and housewives, exploring the hardships faced by people living under troubled regimes.

Testing the boundaries of perception, Tara Donovan’s latest art exhibition showcases a collection of large-scale translucent plastic installations that refract light and distort the surrounding space. Donovan, whose work is often an exercise in the accumulation and aggregation of mass-produced goods, focuses here on creating relational and atmospheric effects.

In addition, a series of twenty-four designs, created by pressing ink through the fabric of the fabricated metal screens, breaks the regularity of the established grid.

Tara Donovan’s large-scale installations, sculptures, drawings, and prints use everyday objects to explore the transformative effects of accumulation and aggregation. By identifying and exploiting the commonly overlooked physical properties of humble mass-produced goods, Donovan creates unearthly works that challenge our habits and preconceptions.

The atmospheric effects of her art bring her closer to artists of Light and Space such as Robert Irwin and James Turrell, while her commitment to labor-intensive and adaptive methodology connects her with post-minimalist and process artists, especially Eva Hesse, Jackie Winsor, Richard Serra. , and Robert Morris.

“Feast in the Neon Jungle”

Mapping the movement of culture through stories of spices, wax candles, or lovely white porcelain bowls, her table landscapes are the site of narrative portraiture – sometimes a shrine of sorts, sometimes a stage, or a public domain. Sometimes they are a place for formal or historical political action, and sometimes she just wants to capture the essence of a person through the objects that he consumes or surrounds.

Complicated, often vulgar, and always defiant, Paul McCarthy became known for his lewd sexual imagery, suggestive of power and violence. The art exhibition features a selection of large-scale drawings from his latest A&E project (2019) – an acronym for Adolph and Eve, Adam and Eve, and Arts & Entertainment. This series, directed by German actress Lilith Stangenberg as a feature film, explores the same themes that are rooted in the legacy of fascism, religion, and Hollywood.