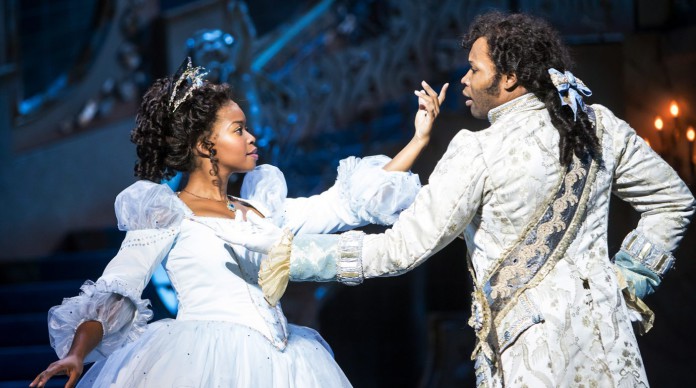 If you can look beyond ‘A Christmas Carol,’ these festive family shows prove there are plenty of ways to deck the halls.

The holidays are almost here, and theatres for young audiences (TYA) across the country are finding ways to celebrate. While companies that serve more general audiences might program A Christmas Carol during this time of year, TYA theatres are offering a wide range of festive shows. Whether it’s a new take on an old classic, a contemporary holiday story, or a fairytale that resonates year-round, there are plenty of shows this season to get kids and their families in the holiday spirit.

Ballerina Swan and the Nutcracker
New York City Children’s Theater (Nov. 26 – Dec. 18) will produce a companion piece to 2013’sBallerina Swan. This world premiere blends dance and puppetry as Sophie the Swan prepares for her first performance in The Nutcracker. Michael McGowan choreographs, and the characters are inspired by Allegra Kent’s book Ballerina Swan.

The Best Christmas Pageant Ever
Barbara Robinson’s hilarious children’s book tells the story of the mischievous Herdman kids and the small-town Christmas pageant they save. Robinson’s own adaptation of her book will play atColumbus Children’s Theatre in Columbus, Ohio (Nov. 25 – Dec. 18). Children’s Theatre of Charlottein North Carolina will produce a musical adaptation of the book by Jahnna Beecham and Malcolm Hillgartner, playing Nov. 25 – Dec. 23. Artistic director Adam Burke will direct.

A Charlie Brown Christmas
The Peanuts gang comes to life in Eric Schaeffer’s adaptation of the beloved television special, complete with Charlie Brown’s tiny Christmas tree, some slick dance moves, and a search for the true meaning of Christmas. Dallas Children’s Theater’s production will play Nov. 18 – Dec. 21, and Boston Children’s Theatre will put up the show Nov. 26 – Dec. 18.

Cinderella
The classic fairytale will be produced by two leading TYA theatres this season. Children’s Theatre Company in Minneapolis, Minn., is remounting their production from two seasons ago Nov. 8-Jan. 8, 2017. The adaptation, written by John. B. Davidson and directed by artistic director Peter C. Brosius, includes lavish production values, broad humor, and some new surprises. Nashville Children’s Theatrewill bring back its Victorian-inspired production from earlier this year for a special holiday engagement, which runs Dec. 15-22 and is adapted by late artistic director Scot Copeland, who passed away in February.

Beauty and the Beast
This year marks the 25th anniversary of the Disney film’s release, and the stage adaptation plays at Imagination Stage in Bethesda, Md., Nov. 19-Jan. 15, 2017. The show features the movie’s classic score by Alan Menken, Howard Ashman, and Tim Rice, and is directed by associate artistic director Kathryn Chase Bryer.

Fancy Nancy Splendiferous Christmas
Jane O’Connor’s Fancy Nancy book series follows the adventures of a girl who loves to glitz things up. This adaptation of Nancy’s holiday adventure has a book by Cara Lustik and Matthew Hardy and music by Randy Klein. The musical will play at Main Street Theater in Houston, Texas, Nov.8-Dec.23, directed by Jimmy Phillips. Hannah Dworkin directs the musical at Bay Area Children’s Theatre Nov. 26-Dec. 29.

Harry Connick Jr.’s The Happy Elf
A story about a cheerful elf who brings joy to a town of naughty children, this musical has a jazzy score by Harry Connick Jr. and a book by Lauren Gunderson and Andrew Fishman. Like so many holiday theatre traditions, this show started as a television special and is now being produced by professional and community theatres across the country. Orlando Repertory Theatre is giving it a regional TYA production Nov.7-Dec.18, directed by Jeffrey M. Revel.

The Lion, the Witch and the Wardrobe
Adventure Theatre MTC in Glen Echo, Md., will bring its two-actor adaptation of the C.S. Lewis novel to the stage Dec. 2-31, directed by Tom Story. The company first mounted a production of it at the beginning of artistic director Michael J. Bobbitt’s tenure, and the current show marks his 10th anniversary with the company.

A Plantation Celebration
This year saw the closing of the last of Hawaii’s sugar plantations, a milestone that Honolulu Theatre for Youth will honor and reflect on with A Plantation Celebration Nov. 25-Dec. 17. This world premiere is “a collection of original scenes, stories, and songs that look back on a major chapter in Hawaii’s history—one that has just now come to a close.” The project furthers the company’s mission to create work that celebrates Hawaii’s unique history, and was created and directed by former artistic director Mark Lutwak. It showcases work by Lee Cataluna, Alvin Chan, Moses Goods, Juliet Kono, Darrell Lum, Gary Pak, and Bryan Wake.

Prancer
When Jessica Rigg finds an injured reindeer in her backyard, she’s convinced that he’s fallen from Santa’s sleigh. Based on the 1989 family film, Prancer will get its world premiere at the Rose Theater in Omaha, Neb., Nov. 25-Dec. 18, directed by artistic director Matthew Gutschick. The adaptation is written by the film’s screenwriter Greg Taylor and will include puppetry by Erik Novak.

Rudolph the Red-Nosed Reindeer
The 1964 television classic is getting a lot of love onstage this season. First Stage Milwaukee will put up an adaptation conceived and directed by artistic director Jeff Frank Nov. 25-Dec. 31, with a script by Robert Penola. The Coterie of Kansas City, Mo., is also producing Frank and Penola’s adaptation, directed by artistic director Jeff Church, Nov.8-Dec. 31. An adaption written by Jon Ludwig and directed by Tim Sweeney will play at Center for Puppetry Arts in Atlanta, Ga., Nov. 8 – Dec. 31, using rod, blacklight, and body puppetry.

The Snow Queen
Lexington Children’s Theatre in Lexington, Ky. will adapt Hans Christian Andersen’s story of friendship and sacrifice Nov. 26 – Dec. 4. Written by Robin Hill, the production is a collaboration with the Bluegrass Opera and utilizes puppetry and dance.

Stellaluna
Not your traditional holiday show, Stellaluna is an adaptation of the 1993 picture book about a baby fruit bat who gets separated from her mother. Seattle Children’s Theatre first collaborated with the Dutch company Speeltheater Holland on Stellaluna in 1997, and is working with the company again on this production, which runs Dec. 1-Jan. 15, 2017.

A Very Hairy Javelina Holiday
Susan Lowell’s The Three Little Javelinas books put a southwestern spin on the story of the three little pigs. The javelinas continue their adventures in this holiday musical, with book and lyrics by Jenny Millinger and music by Todd Hulet. The show is playing at Childsplay in Tempe, Ariz., Nov. 19-Dec. 24.

Young Charles Dickens
This musical prequel to A Christmas Carol will get a reworked production from New York City Children’s Theater Dec. 2-8, following last year’s world premiere. Based on actual events, Young Charles Dickens recounts the Christmas that 12-year-old Dickens spent working in a factory and developing his social conscious. Andrew Frank directs the musical, which has book and lyrics by artistic director Barbara Zinn Krieger and music by Charlie Greenberg.