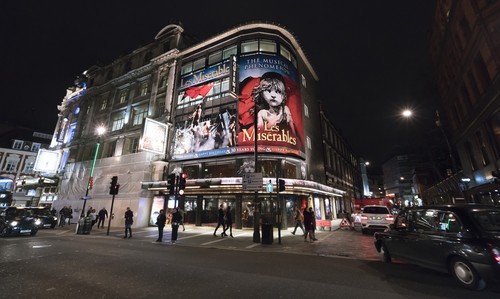 Being the summer holidays, a lot of people will be taking their first (or maybe their tenth or hundredth!) trip to London theatres around now, so as someone who spends an awful lot of time in the city, I thought I’d share with you my 5 top tips for visiting the theatre in London…

1. Book your tickets in advance – while there are plenty of places to buy tickets on the day, there is nothing worse than missing out on seeing a popular show like Wicked (no pun intended!) or Les Miserables, having left it too late. If you buy tickets from somewhere like London Theatre Direct, for instance, you’ve got nothing to worry about on the day, and you also benefit from discounts and special offers now and then! Once you’ve decided which show to see, have a read of what critics and bloggers are saying about it, and maybe take a look at the history of the show – is it a revival? Is it an adaptation of a book or movie? There’s nothing better than walking into a theatre feeling like a know-it-all!

2. Turn your phone off! There is nothing more annoying than paying good money for a theatre ticket and then being distracted by someone near you scrolling through Facebook throughout the show! By using your phone, you’re actually breaking the theatre’s code of conduct anyway, as well as wasting your money; don’t pay for a ticket if you’re not going to actually watch the show!

3. Along the same lines as point number two – cameras are a big NO! What many people don’t realise is that it’s actually illegal to film and take photos of most shows due to the set, costumes, music and script being copyrighted. Not only is it against the law, but it’s also really annoying for everyone else – watch the show in the flesh, not through a tiny screen!

4. Buy your programme before the show starts rather than in the interval – that way, unless you want a drink or ice cream, you don’t actually have to leave your seat in the interval, so you can have a nice long read of your programme, and you’ll practically be on first name terms with the cast by the time act 2 begins!

5. After the show, share your opinions with the world on social media (but without any photos or videos, remember point 3!). Most London and regional shows have their own Twitter accounts and Facebook pages nowadays, which are frequently read by the cast, so if you do enjoy the show I’m sure they’d love to hear about it! Along the same lines, if you book tickets through London Theatre Direct, we’d love to hear what you think, so you can follow and tweet us at @theatre_direct!

If you’re taking a trip to London’s West End soon, I hope you enjoy yourself, and if you follow my tips and book your tickets through London Theatre Direct, you’re sure to have a whale of a time!

It was in a school production of The Wizard of Oz, aged 7, that Em first discovered the buzz of performing. Since then, she hasn’t stopped loving musical theatre; living close to London has given her the opportunity to see lots of West End shows over the years, fuelling her ever growing passion for all things theatre. This passion is what later prompted her to start her blog in early 2014, and what motivates her to keep blogging now!