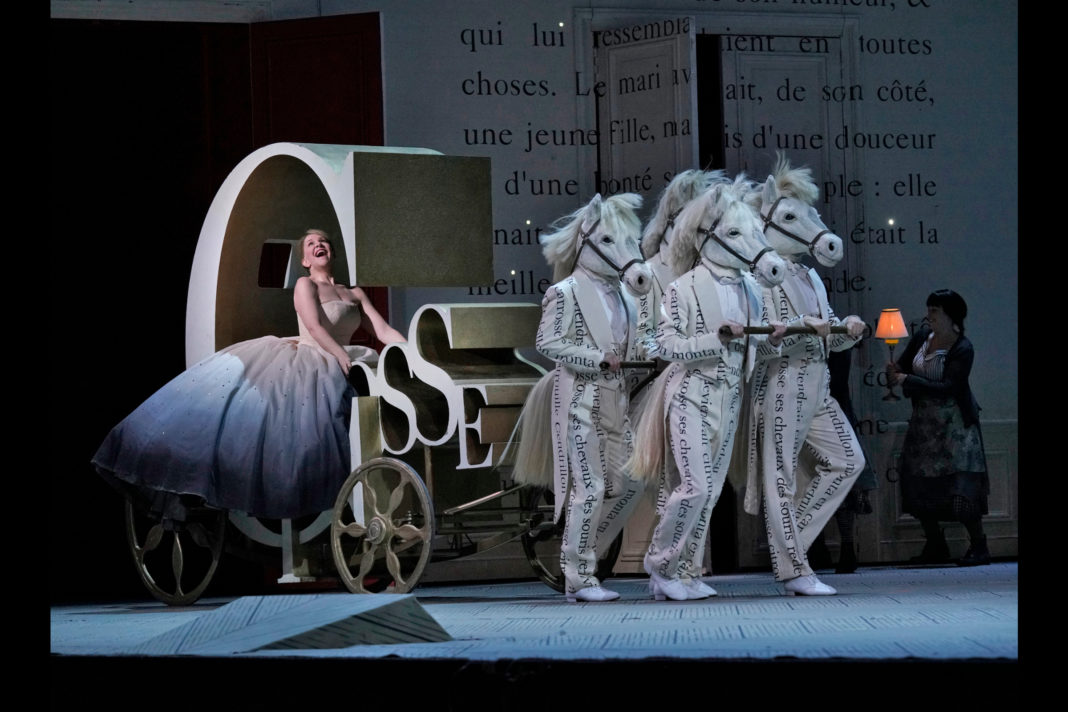 Laurent Pelly’s production of Massenet’s Cendrillon, first seen in Santa Fé in 2006, finally made its way to New York, after detours taking this charming and ironical mise–en–scène to major European opera houses (including Covent Garden in 2011). Composed in 1899, this retelling of Charles Perrault’s fairy-tale has its première at Metropolitan Opera on this occasion. Cendrillon is thus part of a veritable wave of rekindled interest for Massenet’s music at the Met: Thaïs was revived earlier this season; Werther and Manon are also part of the regular repertoire, always featuring high-octane casts.

The opera is far from a revolutionary masterpiece. The score is a well-crafted potpourri of Baroque pomp, Wagnerian élan, Mendelssohnian glittering sparks and even Debussian detachment. The big moments – the ball, the love duets, the fitting of the slipper scene – are always pretty, appealing and variedly handled. But it would be difficult to find any outstanding, memorable individual musical fragment throughout the score. French conductor Bertrand de Billy kept the music from being too syrupy, underlining the witty patches and the beautiful, sparse orchestration with oboe, harp, celesta or individual strings detaching themselves from the musical canvas. 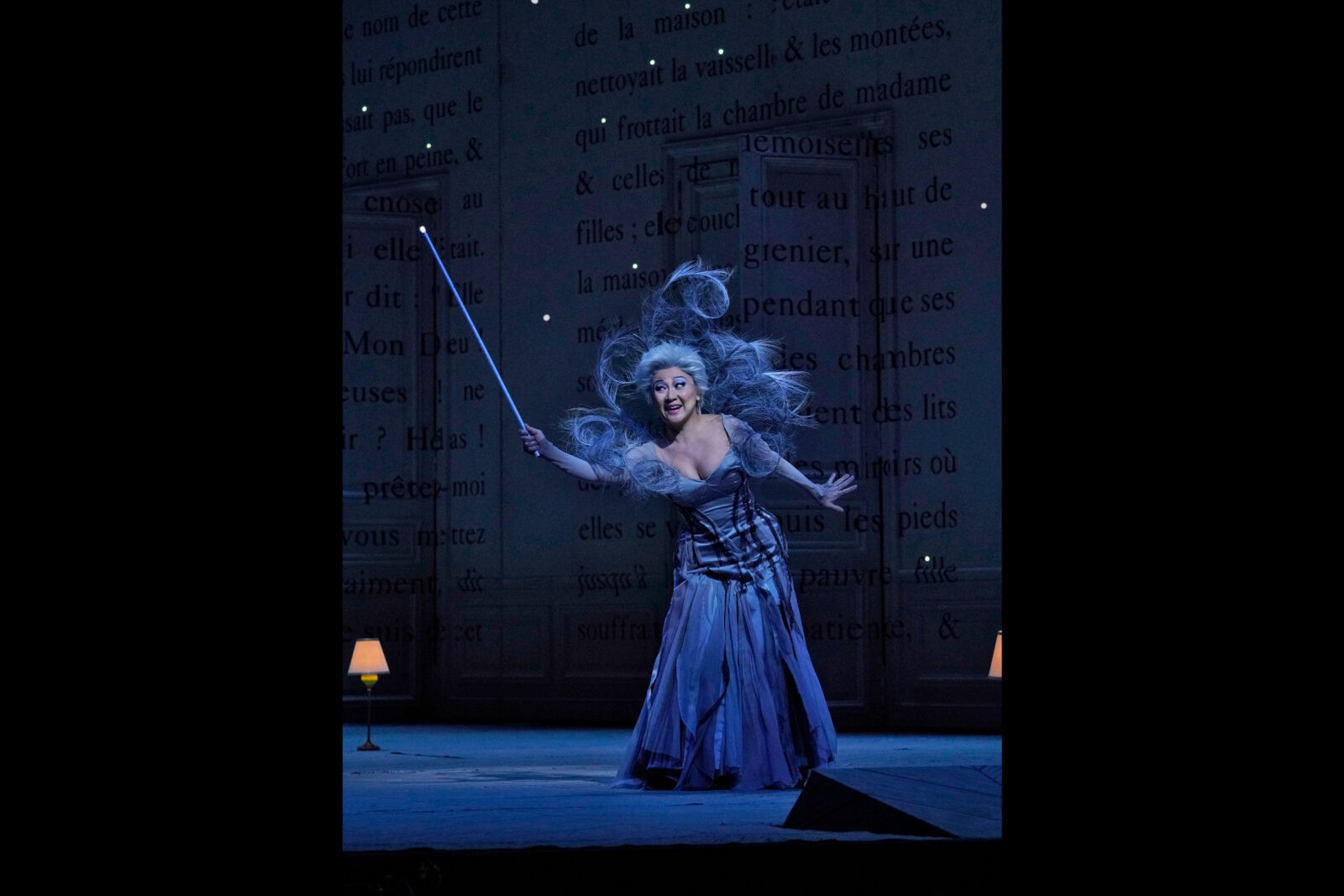 Staging Cendrillon at the Met was meant to be a vehicle for paying homage to the great American mezzo Joyce DiDonato, with her extraordinary qualities as a singer and actress and her remarkable history with the company. Lucette (Cendrillon) is one of her favorite roles. As an actress, she is still fully capable of bringing forward the young girl’s ingenuousness and bewilderment, her difficulties distinguishing between real and imaginary. Obviously, DiDonato’s voice is not what it used to be when she appeared in Pelly’s original production. Maintaining its trademark overall mellifluousness and warmth, it becomes hardened or unsure in the upper register. With her astonishing artistry, DiDonato was generally able to make her vocal insecurities seem part of Cendrillon’s characterization. Her struggles only became evident when Massenet’s music is attempting to convey – with floating, soaring lines – Cendrillon’s youthful enthusiasm, not her melancholy.

Massenet composed the role of Le Prince Charmant for a female voice, probably to underline the attraction between two innocent souls. DiDonato’s partner was British mezzo-soprano Alice Coote. Embodying a sulky youth or an ardent prince, her stage presence is undiminished. The known incandescence, intensity and focus of her voice are a tad faded now. At points, she pushed, especially on the top notes, her instrument beyond its current capabilities. It was impressive, though: Coote’s duets with DiDonato still sounded lovely despite the not-so-young voices. 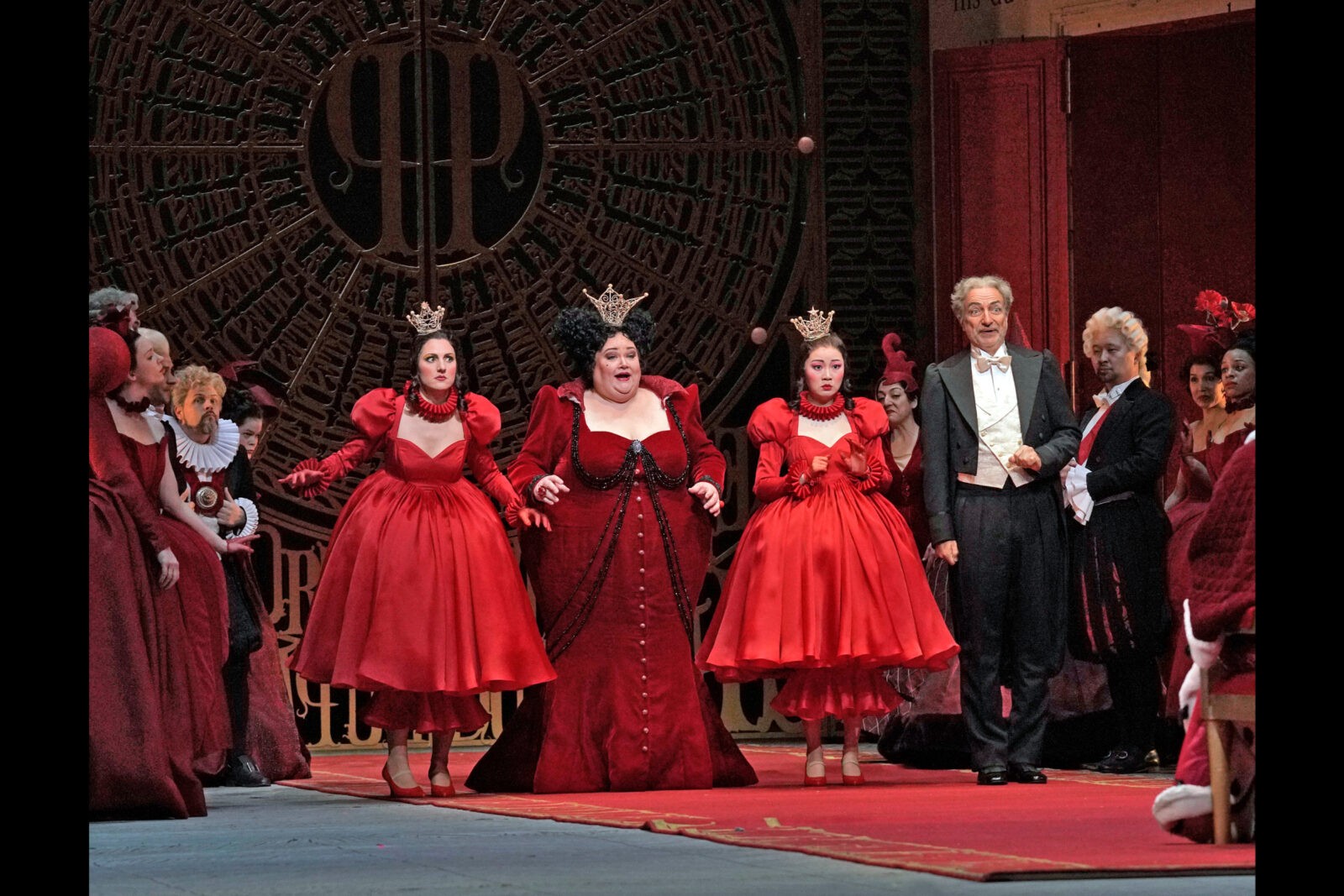 As Madame de La Haltière, the wicked stepmother, the third mezzo of the evening, Stephanie Blythe, stole the show with her stentorian, dusky voice and her riveting gift for comedy. She threw herself into the part with gusto, ignoring a not always immaculate intonation. Blythe was especially irresistible when describing her “glorious” family tree. Ying Fang and Maya Lahyani were unreproachful as her indistinguishable daughters, Noémie and Dorothée.

In the role of Pandolfe, Cendrillon’s father, bass-baritone Laurent Naouri graced the stage with his warm, deep voice. He was as successful in his humorous dialogue with his termagant wife as in displaying his deep affection for his daughter. Kathleen Kim was the Fairy Godmother, her voice ascending calmly and assuredly to the proper heights. It was not, however, mesmerizing. 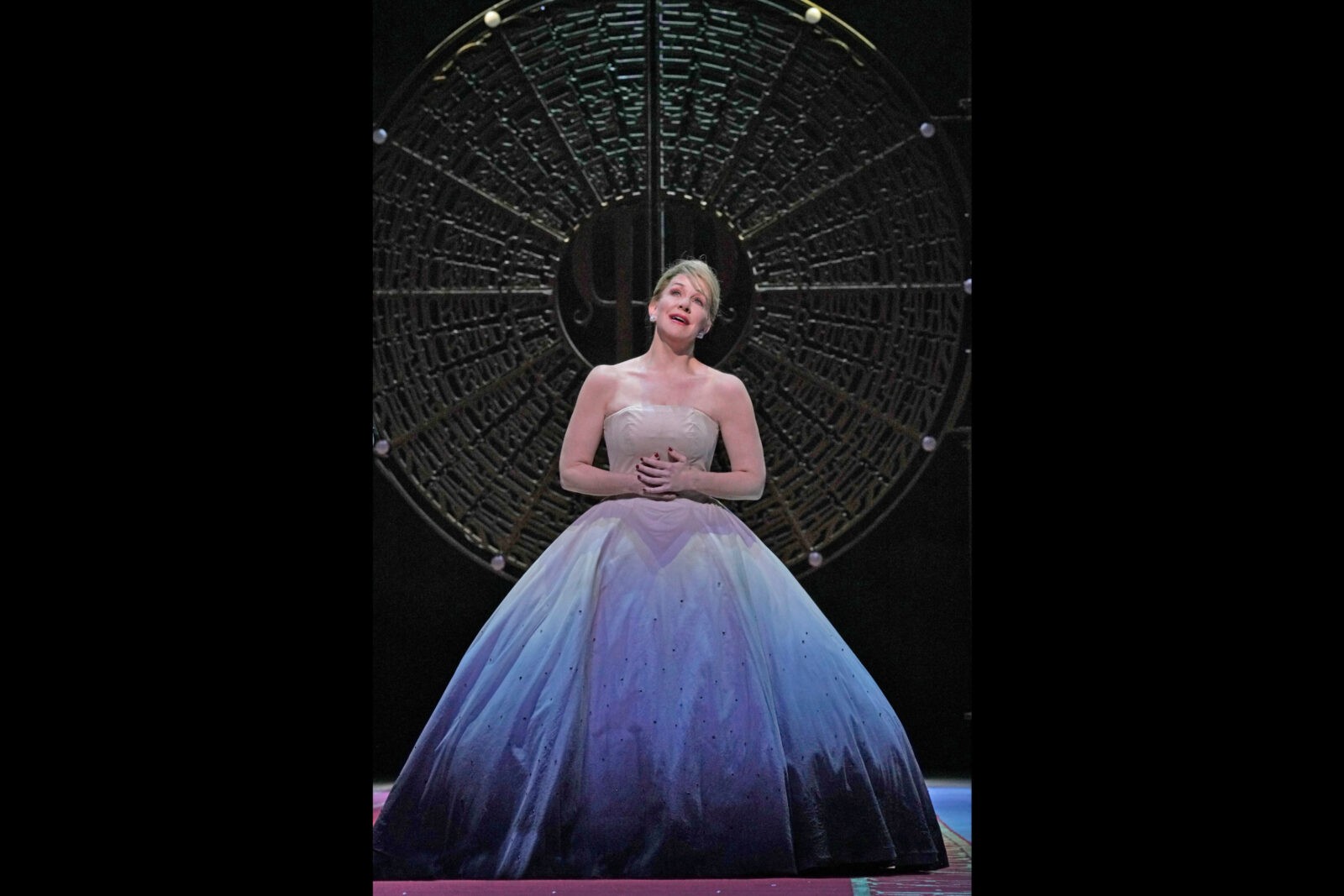 Arguably, the most memorable aspects of this performance were those related to Laurent Pelly’s frothy, elegant staging, balancing wit and emotions. The sets (Barbara de Limburg) consisted of moving panels inscribed with French extracts from Perrault’s text. They opened and shut according to the action’s needs, revealing all sorts of details. On the other hand, choosing to move the love scene from an open space to a chimneyed rooftop didn’t make too much sense. The costumes, designed by Pelly himself, were superb. Cendrillon’s white ball gown had an ashen lower trim, a reminder of her status. Her carriage was drawn by two-legged white horses. Madame de la Haltière and her daughters were dressed in bulbous outfits barely allowing them to move. The most astonishing costumes, in different shapes and various nuances of scarlet with fantastic assorted hats were those of the noble ladies trying to woe the prince. Their parade (choreographed by Laura Scozzi) had a subtlety and grotesque reminiscent of the “Parada de moda ecclesiastica” from Fellini’s Roma.

Irrespective of how successful a staging of this fin-de-siècle composition it is, it can’t raise the work’s place in the operatic canon too much. At the same time, Massenet’s music for Cendrillon was the foundation for one of the most pleasant evenings at the Metropolitan this season.