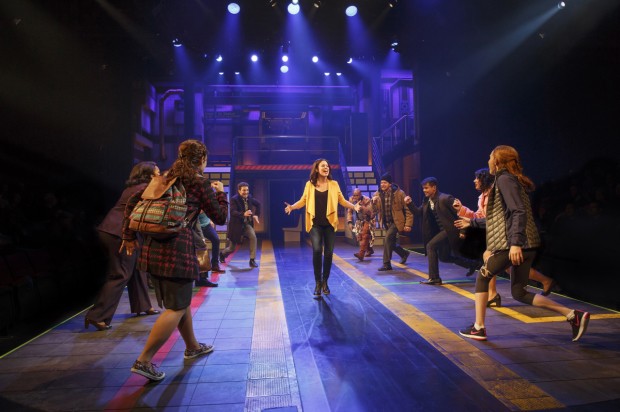 The musical by Kristen Anderson-Lopez, James-Allen Ford, Russell Kaplan, and Sara Wordsworth ends its Circle in the Square run.

The Broadway production of In Transit, an a cappella musical coauthored by Kristen Anderson-Lopez, James-Allen Ford, Russell Kaplan, and Sara Wordsworth, will end its run at the Circle in the Square Theatre this Sunday, April 16, after 36 preview and 145 regular performances. The production opened December 11.

Directed and choreographed by Tony winner Kathleen Marshall, the a cappella musical is inspired by the rhythms of the subway as various characters find their way in New York City. It features a book, music, and lyrics by Anderson-Lopez, James-Allen Ford, Russell Kaplan, and Sara Wordsworth. The production will have vocal arrangements by Deke Sharon and musical supervision by Rick Hip-Flores. The original Broadway cast recording will be released on Hollywood Records and will be available digitally on Friday, April 28, and in-stores on Friday, June 9.