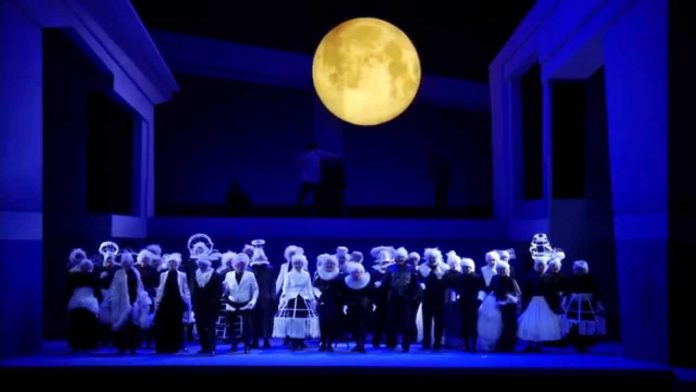 The two one-act Operas by Carl Orff (1895–1982), globally known for his cantata Carmina Burana, retell in the form of entertainment and epic folk theatre the respective fairy tales of the Grimm brothers. Die Kluge (The Wise Girl) is about a poor but shrewd peasant girl who can answer any riddle, outwits three swindlers and even wins the love of the king, while Der Mond (The Moon) is a story about foolish people who steal the Moon for themselves, until Saint Peter retrieves it and hangs it again in the sky, out of reach of their meddlesome hands.

Orff’s “Theatrum Mundi” encompasses acting, singing and speaking, it shows people scheming, gambling, boozing, swearing and loving, laughing and weeping. The sheer colorfulness, grotesqueness, and wisdom of the Grimms’ fairy tales as rendered by Carl Orff can be primarily valued by older children and adults of all ages. The most recent production of Orff’s Die Kluge has staged at the National Theatre in Prague some 35 years ago, whereas Der Mond will be presented for the very first time.

Die Kluge. Die Geschichte von dem König und der klugen Frau is an opera in 12 scenes written by Carl Orff. It premiered in Frankfurt, Germany, on 20 February 1943. Orff referred to this opera as a Märchenoper (fairy tale opera). The composer also wrote the libretto, based on Die Kluge Bauerntochter (The Peasant’s Wise Daughter) from the Grimm’s Fairy Tales. A performance lasts for about 90 minutes and is often paired with Orff’s Der Mond.

The plot of the opera is that a poor peasant finds on his land a mortar made out of gold. He decides to take it to the king, thinking that he will be rewarded for being a loyal subject. His wise daughter tells him not to because the king will throw him in the dungeons thinking that he has stolen the pestle, which in truth he didn’t find.

The daughter’s prediction comes true, and this is the beginning of the opera. When the king learns that the daughter had wisely known what his actions would be he sends for her to come before him. He tells her she has “talked a noose around her neck” and will give her two choices for how to save her life. She can either gamble for it, or answer three riddles.

The wise daughter chooses to answer the three riddles and saves her life. The king makes her his queen and all seem happy.

Der Mond (The Moon) is an opera in one act by Carl Orff based on a Grimm’s fairy tale) with a libretto by the composer. It was first performed on 5 February 1939 by the Bavarian State Opera in Munich under the direction of Clemens Krauss. The composer describes it not as an opera but as Ein Kleines Welttheater (“A little world theatre”); the performance lasts for about one hour and is often paired with Orff’s Die Kluge.

The story involves characters who steal the moon for their country which does not have a moon. They take the moon to their graves upon their deaths and St. Peter goes to the underworld to retrieve it and hang it again in the sky. Two speaking roles include that of a child and a landlord. Singing roles include the four rascals who steal the moon, St. Peter, a farmer and the narrator.