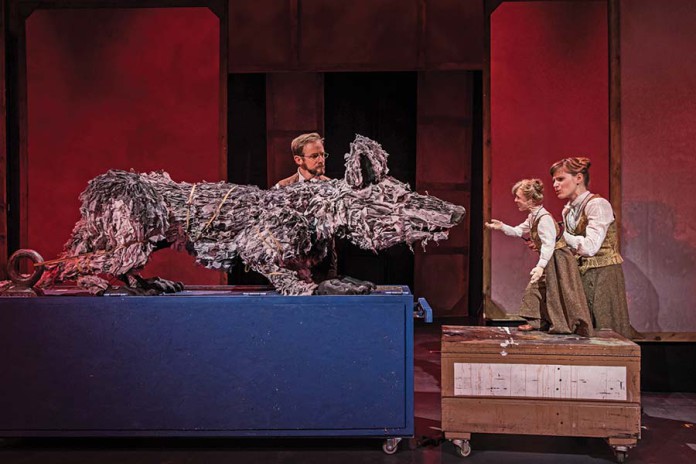 In Mr. and Mrs. Pennyworth, at Lookingglass Theatre Company in Chicago through Feb. 19, the titular characters are professional storytellers who are able to literally enter the world of their tales at will. The show’s writer and director, Doug Hara, decided to tell the story using two kinds of puppetry: shadow (created by Manual Cinema) and three-dimensional (created by Blair Thomas). “The more verbally and emotionally complicated a scene was, the more likely I was going to need a 3-D puppet instead of shadow,” he explains.

Thomas was tasked with creating four puppets, which required eight people working over five months to build. Below, he explains how he created the most complicated, and biggest, puppet in the show, the Norse boar Saehrimnir, and why talking puppets can be a tricky proposition.

“The stage description for Saehrimnir was, ‘Should be pretty freaking awesome.’ For a puppet, the power of speech is lower on the list of character attributes, and is often superseded by the more visual qualities: size, movement, materiality, and design. So this scene [above] was a double-edged sword: It was great to have such an important scene, but it pushed the capacity of the puppet.

“And there was the big puppet dilemma: Make it big and strong, but light enough to be operated by a single puppeteer. I used a little plywood, a thin steel-welded frame, and then lots of stripped rattan caning. The whole of the armature is built on a light frame backpack with the weight of the puppet balanced in front and behind. This is a design copy of the Handspring Puppet Company [of South Africa]’s War Horse puppets. I also built a balanced gimbal neck joint for expressive head movement, and the mouth and eyes are operable. The front legs are attached in two places to [actor Samuel Taylor’s] legs, and the back legs are fixed. We installed a battery-operated speaker in the head so some of Samuel’s amplified voice would be coming out locationally in the staging.

“As a puppeteer, the joy came when I handed the puppets to Lindsey [Noel Whiting] and Samuel. Both actors were capable of giving a dynamic character performance within an inanimate puppet.”