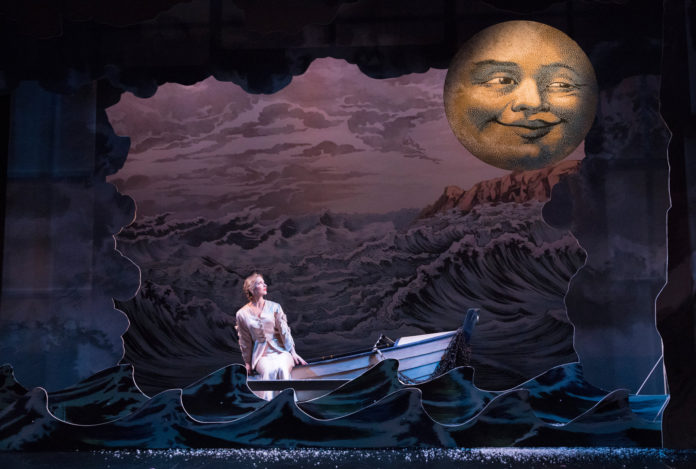 The glorious ghosts who walk the halls of the Claire Tow Theater at Lincoln Center have greasepaint in their ectoplasm, and they do hope you’ll like what they do. These wandering souls are doomed to an eternity of narcissism, yet there is something they love even more than themselves.

That would be the theater. And anyone who shares that obsession will want to spend the enchanted two hours in their company provided by “Ghost Light,” the new immersive performance piece from Third Rail Projects, which opened with a profound and shivery sigh on Tuesday night.

This latest work from the Brooklyn-based creators of the long-running“Then She Fell,” an interactive and enlightening journey through Lewis Carroll’s Wonderland, plugs into the unconscious of those who never outgrew their childhood crushes on the glamorous, wicked stage.

“Ghost Light” is a spectral tour of the hoary legends, superstitions and rituals that remain sacrosanct in the hearts of even the most jaded playmakers. Directed and choreographed by Zach Morris and Jennine Willett, this production traffics in, and transcends, the enduring clichés of a profession, finding a hypnotic circularity in a craft that is, after all, about recreating the same images and words night after night after night.

Featuring sets by Brett J. Banakis and lighting by Eric Southern, “Ghost Light” transforms the compact, contemporary Claire Tow into a labyrinthine, old-fashioned show palace. Audience members are led in groups onstage and backstage; through dressing, storage and rehearsal rooms; and only at the very last into the sort of seats to which they are accustomed.

Though you will pass through the corridors more than once, the view keeps changing, and you half expect the floor to dissolve beneath your feet. The artists of Third Rail are masters of the skewed perspective. A large mirror in a prop room is angled so that you witness the reflection of backstage mayhem, as cast and crew repeatedly rush through costume and scenery changes, with only the slightest variations.

I had met this dying diva earlier. That was in her dressing room; I brought her roses, which had been plopped into my arms by a stage manager. She wore gold lamé (Montana Levi Blanco is the costume designer) and the perfume of gaudy desperation.

She asked us, far too eagerly, if we had really loved her performance. She then recruited an audience member to run lines with her from a new script. Funny thing, though — those lines were identical to what she had said earlier in talking to us, uh, spontaneously.

The blurring of truth and illusion is a continuing motif in “Ghost Light.” So is the endless repetitiveness of life in the theater — for its ushers and cleaners and technicians, as well as for those who speak the words decreed by a playwright.

“I have this recurring monologue,” says a man we encounter in a hallway. He’s dressed up in the style of a Beckett hobo, and as he delivers his set speech, in a wan funnel of light, he factors the playwright who created him into the equation, asking us to imagine a dramatist’s writing a character in an endless creative loop that erases the boundaries between past, present and future.

There is also the handsome man in white tie and tails who collects and cherishes all the lines that have ever been cut from scripts. And a ravishing actress in a beaded gown who is made to repeat fragments of one speech — about lying for a living — as the lights are adjusted during a tech rehearsal.

A woman with improbable eyelashes and a Pierrot’s face has us gather around an upright piano as she sings a sad tale of a minstrel. The music throughout — always hopelessly romantic — is by Sean Hagerty. Mr. Morris wrote the script, which is full of the pretensions, posturing, mythologizing and hokiness that will always be part of the religion of theater.

Be warned: You may be asked to take part in the rehearsal of a pastiche Elizabethan play, overseen by an actor-manager dressed in the image of William Shakespeare. Or to help conjure the sound and visual effects for a woman in a rowboat reaching for the moon. Or to arrange a model set.

You’ll never be asked to take center stage, though. These restless phantoms would never cede that cherished spot. But don’t underestimate your power, either. Your attention, dear audience, is what keeps these spirits alive.

Credits Written by Zach Morris, created in collaboration with the Company; Conceived, directed and choreographed by Zach Morris and Jennine Willet