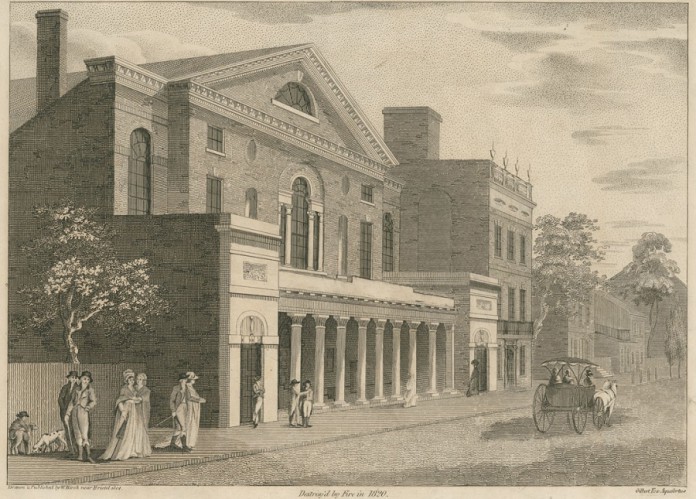 255 YEARS AGO (1761)
David Douglass opens his new theatre on the corner of Nassau and Chapel Streets in New York City with productions of The Fair Penitent and Lethe. Also this month, the theatre will present the second American staging of Shakespeare’s Hamlet.

200 YEARS AGO (1816)
The New Theatre in Philadelphia, later renamed the Chestnut Street Theatre, opens with a performance of She Stoops to Conquer that employs gas lighting, by many accounts the world’s first theatre to use such a system. Gas will revolutionize stage lighting, creating a more economical approach that also enables audiences to see more details in design and acting.

100 YEARS AGO (1916)
The Vagabond Players in Baltimore, part of the Little Theatre movement, presents its first production, an evening of three one-acts: The Artist, Ryland, and Merry Death. Unlike the Provincetown Playhouse on Cape Cod, the troupe will not turn professional; however, a century later, the organization will call itself “America’s Oldest Continuous Little Theatre.”

95 YEARS AGO (1921)
The Los Angeles-based Teatro Principal publishes the city’s first known call for original Spanish-language plays in El Heraldo de México. Local writers are invited to send in works of any genre, both verse and prose. Within a few years, L.A. will become a center for many early Chicano playwrights, including Adalberto Elias Gonzalez, Gabriel Navarro, and Eduardo A. Carrillo.

90 YEARS AGO (1926)
Saturday Night, the first production by Eva Le Gallienne’s Civic Repertory Theatre of NYC, plays its final performance. Allegedly funded in part by Le Gallienne’s romantic partner, Alice DeLamar, the company will continue operating for a decade, solidifying Le Gallienne as one of the most significant theatre artists of the 20th century. In 1986, the National Endowment for the Arts will recognize Le Gallienne with the National Medal of Arts.

60 YEARS AGO (1956)
Lighting designer Tharon Musser makes her Broadway debut with the U.S. premiere of O’Neill’s Long Day’s Journey Into Night. Musser will be named “the dean of American lighting design,” designing well more than a hundred Broadway shows. Her assistants will become successful designers in their own right, including Marilyn Rennagel, who will become Musser’s life partner.