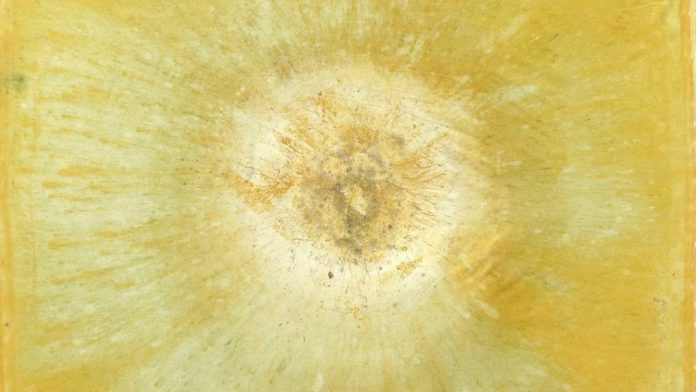 Czech artist Jan Karpíšek creates paintings and assemblages in collaboration with his honeybees and other natural processes. His art is connected to his interest in permaculture gardening and zazen practice. We talk to him about his innovative methods and sources of creativity.

A: Could you discuss your works – what you are trying to achieve and what are the processes behind them?
JK: I have always attempted to portray strong moments of enlightenment in my artwork or let’s say breakthroughs along my spiritual journey. Every living being encounters such miraculous inspirational moments in everyday life, often in the open countryside, but also during ordinary interactions with everyday objects and the people they meet. They don’t necessarily have to be explicit states of meditation. I also process very personal moments, such as the disintegration of my family and the separation from my son.

My life is in the closest communion with creation. In a formal sense, on one level I attempt to capture these messages of the miracle of life in regular figurative paintings. My style is mainly expressive and naivist, but I also paint abstractly. On another level, I get closer to the flow itself by releasing the grip of authorial control and letting the natural processes themselves participate on the canvas. For example, the repeated drying and filling of pools of liquid, the stream of the creek, or the activity of bees.

A: How does your cultural identity feed into your work, if at all?
JK: As a Central European, a Christian, with the experience of communism, my cultural identity is obviously deeply rooted. At the time I was coming of age and becoming intellectually independent from my family, the fall of totalitarianism took place in Czechoslovakia and the society was seized by an unprecedented boom of all kinds of spiritual teachings, which had up to then been repressed for 40 years. I therefore feel that from an early age I began to absorb the philosophy of Buddhism deeply, building up my own cultural identity. But this is a common experience of many people in my generation.

A: You seem to have used a myriad of techniques in your oeuvre – could you talk about the different ways you have approached the works including the influence of zazen practice and dried pools of liquid on the canvas?
JK: I never wanted to limit myself to one style or technique, for example, in order to gain an advantage so my work would be easily recognised. I wouldn’t like to restrict my freedom of expression and lose the possibility of responding to creative impulses in various ways. While practicing zazen a person observes an entire spectrum of phenomena; the internal processes of the body and mind, the so called “mental train”, its gradual slowdown and occasional disappearance, and all the stimuli of the outside world.

I think the experience of directly facing everything refines the ability to be aware of the smallest details, as well as a broad context in a very specific way. This then naturally manifests itself while exploring themes and during the very creation itself. I discovered drawing through the surface of a drying pool at a car service parking lot in Třeboň and immediately combined it with one of my former themes; the capture of flowing time. I set up a few pools on a canvas in the garden along with local natural clays and let them get rained on naturally with great expectations of how it would all turn out. Life began to emerge in these water tanks on the canvas, mosquitoes hatched, seeds of plants sprouted around the perimeter, and some algae grew, which created a nice green halo. I sold one such painting to someone in Saudi Arabia.

A: Recently you’ve been using the honeybees in your garden to influence experimental art – could you talk about this new project and the developments you’ve made?
JK: I have been beekeeping since 2009 and I noticed right away the potential of the colony’s natural activities for art, specifically the gnawing off of unwanted material in a cavity, respectively the hive, and their construction activities. When there were paper sheets left in the hive after the evaporation of formic acid, used to suppress varroa, the bees used their mandibles to pulverize it into a kind of very fine wool and began removing it from the hive. The actual building of wax combs, which starts by creating these kind of hearts on the upper lath is a fantastic process. I always imagine if people were bees that they would sweat building materials from their glands, like bricks, which they would then build their houses with.

A: How has taking a natural form, such as the insects’ activities, meant discovering new types of artworks in terms of their coincidental behaviour?
JK: The bees themselves, although fascinating, are not really the main subject matter. I’m more interested in the human mind that seeks and finds meaning, symbols and signs; as in random patterns, such as the infamous Rorschach test, so in random life events. This sometimes creates an illusion, which is currently engaged by Buddhism. Here it is further supported by the fact that those images are created by living beings, even by such an amazing superorganism as a honeybee colony. So, I intentionally and provocatively confuse the audience and at the same time deal with their opinions and feelings. It’s lifelong research. Normally introspective, exploring and working with my own mind. In the last series for example, I insert portraits of controversial politicians such as Donald Trump into the beehive. I like to read the viewer’s comments that the bees feel his negative energy and therefore quickly cover his face or that the bees predict the future of him not being elected president, etc.

A: Your works feature a diversity of iconography, from animals to text and landscapes. How do you think people respond differently to each subject?
JK: My experience is that people don’t understand my paintings, they find them strange. I explain it through the fact that existence is a very special thing, or that I’m such a strange creature that I had better work harder toward clarity. Moments of mutual understanding with the audience are pleasant, it’s a kind of intimate intellectual convergence.

A: What have you got planned in terms of future projects/exhibitions?
JK: I want to continue to work with bees, on more abstract and large-format canvases. Also, I would like to focus more on objects. I’d also like to make a gift to myself of the experience of a wider audience. I am preparing exhibition projects in Berlin and London to this end.