Home Exhibitions Aboriginal Art Collection of the University of Virginia 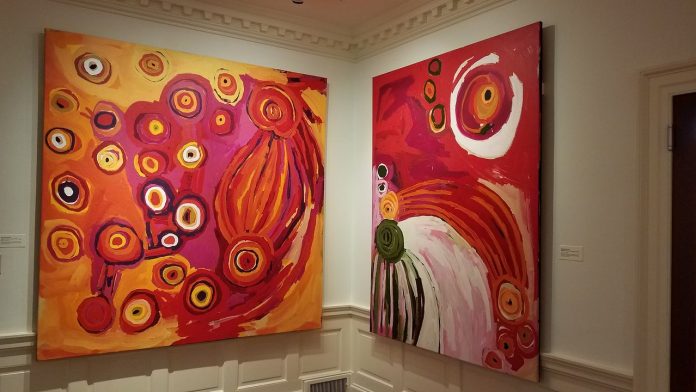 The only museum in the USA that is dedicated to the exhibition and study of Australian Aboriginal art is the University of Virginia’s Kluge-Ruhe Aboriginal Art Collection. It is currently open by reservation only due to COVID19. It is one of only two museums in the world dedicated to Australian indigenous art and an outstanding collection outside Australia.

The Kluge-Ruche aboriginal art collection includes over 1,800 items, including 1,600 donated to the university by the late John W. Kluge in 1998 and 200 items acquired since then. It is leading a movement that is taking over the contemporary art world.

It places Aboriginal art in its rightful place among the world’s most innovative art movements.

A visitor to the Aboriginal Art Museum can expand his world and make fun and amazing connections with:

The exhibition of works from the permanent collection changes annually and the special exhibitions in the revolving gallery change every four months.

Special events include lectures and performances by guest artists, scientists and musicians, film screenings, and educational programs for all ages.

A visit to Kluge Ruhe aboriginal art collection is a great opportunity to experience contemporary art, learn about a different culture, and admire the magnificent views of Charlottesville from this hilltop museum.

Perth-born art historian and newly appointed curator of Australian indigenous art, Henry F. Skerritt put Kluge-Ruhe said that one way to think of Kluge-Ruhe is that it is the most significant aboriginal art collection.

This designation is especially important today, Skerritt said. We are at a time of global changes in contemporary art. For the first time in history, contemporary art has truly become a world art. This is why when Okwui Envezor curated the Venice Biennale in 2015, he put Emily Kame Ngwarri in the spotlight. Kngwarreye is represented in Kluge-Ruhe by seven works.

Kngwarreye is represented in Kluge-Ruhe by seven works. What we have here are not works of regional significance. They are works of global significance for the nature of contemporary art today.

These works are important not only because of their high aesthetic value but also because of their contemporary cultural significance as vivid statements of the proud and talented artists who create them.

One of the challenges of showing aboriginal art collection is to help the public overcome obstacles caused by fear of the unknown, Skerritt said.

Kluge-Ruche’s director, Margot Smith, has championed this approach and this art ever since she began working with John Kluge’s private Aboriginal art collection in 1995. As a Ph.D. student in anthropology at UVA, she did field research in Australia in the early 1990s. After which she was brought in as curator of the Kluge collection. He later joined the faculty after he donated his collection to the university.

She was a pioneer in the international ascent of Aboriginal art and has played a key role in building a cultural bridge between Australia and the United States that continues to pay dividends to artists and art lovers in both countries.

The big role she has played was highlighted last year when Smith was honored as a member of the Order of Australia, the country’s highest honorific. One of the ways Smith and Kluge-Ruche built these bridges was to create opportunities for artists to travel to Charlottesville to share their art and experiences with people around the world and throughout Charlottesville.

Their artist residences provide an opportunity for students and community members to interact with artists and hear about cultural and personal knowledge and experiences.  The multifaceted nature of these residences and their impact on the Earth became evident last fall. Then, the artist Yolngu Jambava Maravili A.M. came to Kluge Ruhe for a residency sponsored by the Arts Council of Australia.

The renowned Yolnggu painter, sculptor, and printmaker from Arnhem Land is the chief ceremonial leader of the Madarrpa clan and was instrumental in forging relations between non-Aboriginal people and the Yolngu peoples. In 2008, he led a successful campaign to recognize their rights at the federal level.

During his residency here, the artist spoke to Professor John Moore’s class on ocean law and policy at the University of Virginia. Skerritt said that Kluge-Ruche had an excellent position at the University of Virginia. There, they can bring together world-class academics with non-traditional scholars, including the oldest and deeply knowledgeable artists, as well as indigenous people with an exceptional body of knowledge and offer academic experience here.

This makes UVA’s program unique in the world and shows that Kluge-Ruhe can provide students with an experience they cannot get anywhere else in the United States. Residences are one of the many ways in which Kluge-Ruhe aboriginal art collection brings indigenous talent to highlight the cultural significance and international appeal of Aboriginal art.

Each year, an aboriginal art collection also showcases work by Indigenous dancers, musicians, fashion designers, actors, scientists, and filmmakers, including collaborating with the Virginia Film Festival to share the voices of Aboriginal filmmakers.

Getting Americans to do something new continues to be a key part of the Kluge-Ruche mission. Aboriginal art collection shows that their culture finds its place in our daily lives, whether we realize it or not.

The Story of Aboriginal Art

Aboriginal culture dates back to 60-80 thousand years ago.

It was then that Aboriginal people first settled in Australia. The first evidence of Aboriginal ethos or philosophy is evident in rock carvings dating back over 20,000 years.

Ocher was used for painting on stones. Archaeologists have been able to date the remains and find from 40,000 to 60,000 years ago since the discovery of the ancient sites. Australian Aboriginal people do not have a written language, so in order to convey their important cultural stories across generations, they are depicted as symbols/icons in their artwork.

It is imperative to communicate information to preserve your culture. Indigenous art focuses on storytelling. It is used as a chronicle to convey knowledge about the land, events, and beliefs of the Aboriginal people.

They used symbols to record culturally significant stories, teaching survival, and land use. Interpretation of iconography differs depending on the audience. 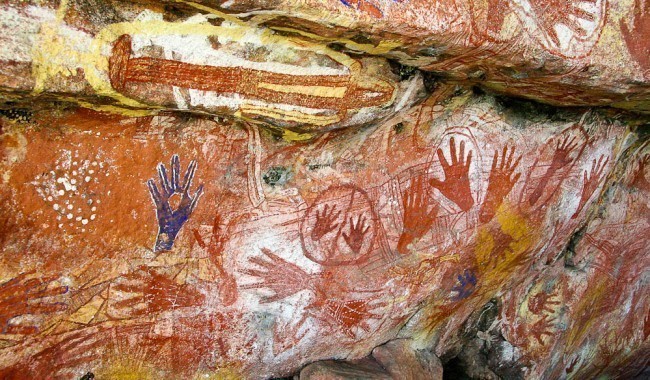 When told to children, it took on a simpler form, emphasizing the educational and behavioral aspects. There may be a combination of information and moral teachings behind this story. Children are taught what is right and what is bad and the consequences of good and bad behavior.

However, in the teaching of the initiated elders, these stories will be interpreted in a completely different and higher form. 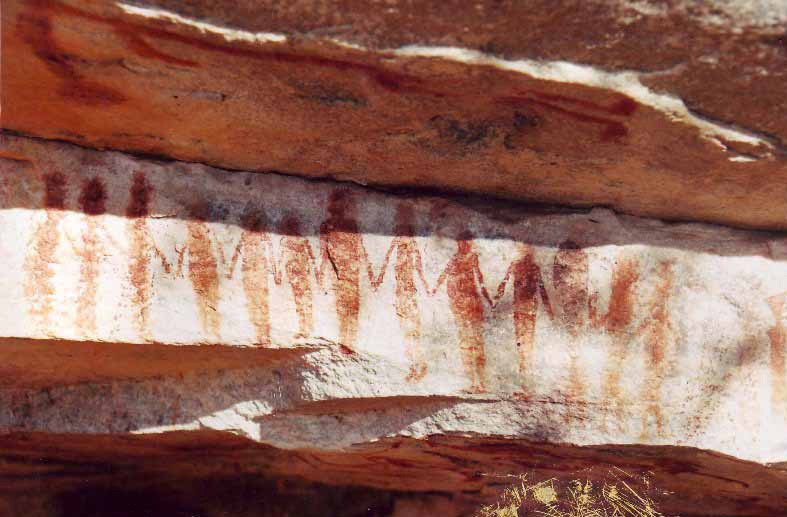 Although Australian aborigines have used ocher as body paint on bark and rocks for tens of thousands of years, the first drawings were only made in the 1930s. They were not painted in ocher or bitmap, but in watercolors at the Hermannsburg Mission near Alice Springs. 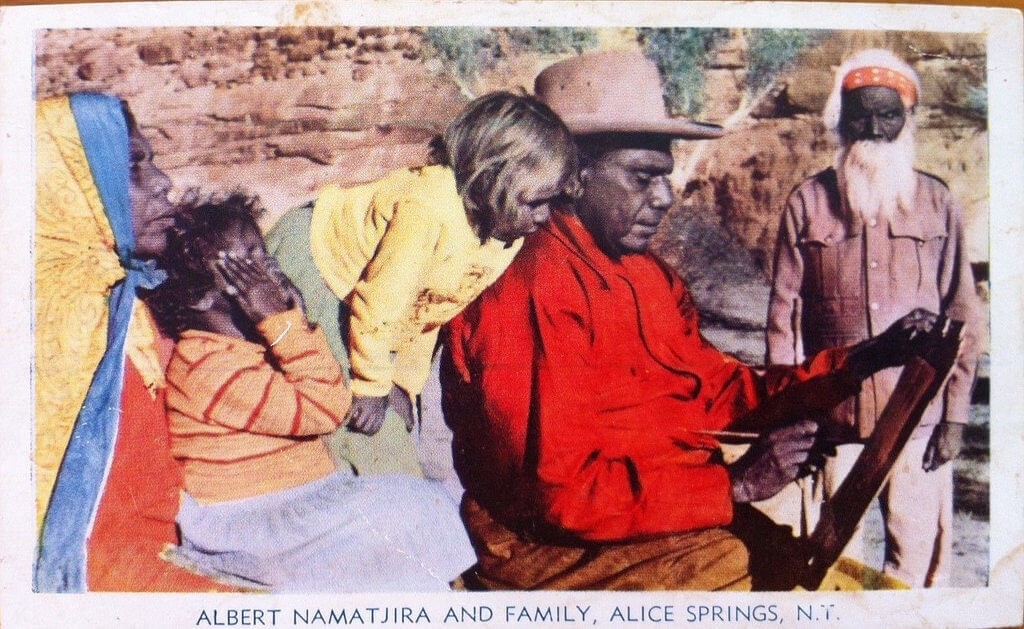 Until the early 1970s, painters mostly used watercolor. Ocher and bark paintings began to be made available to non-indigenous aficionados, and an arts and crafts center was established at Ernabella’s mission in 1948.

Traditionally, Aboriginal paintings were painted on stone walls, ceremonial objects, like body paint, and, most importantly, painted in mud or sand along with songs or stories.

In 1971, a schoolteacher named Jeffrey Bardon worked with Aboriginal children in Papunya, near Alice Springs. He noticed that while the Aboriginal men were telling stories, they were drawing symbols in the sand.

He encouraged them to write stories on canvas and blackboard. This marked the beginning of the famous Aboriginal art movement. It was a big leap for the indigenous people when they started painting their stories on the western facades, which was very foreign to them.

Since then, Australian Aboriginal art has been considered the most exciting modern art form of the 20th century. Aboriginal artists need permission to write specific stories.

They inherit the rights to these stories. They are passed down from generation to generation in certain skin groups. An Aboriginal artist cannot paint a story that does not belong to him through his family.

The Photographer Captured an Unusual Poisonous Inhabitant of the Sea