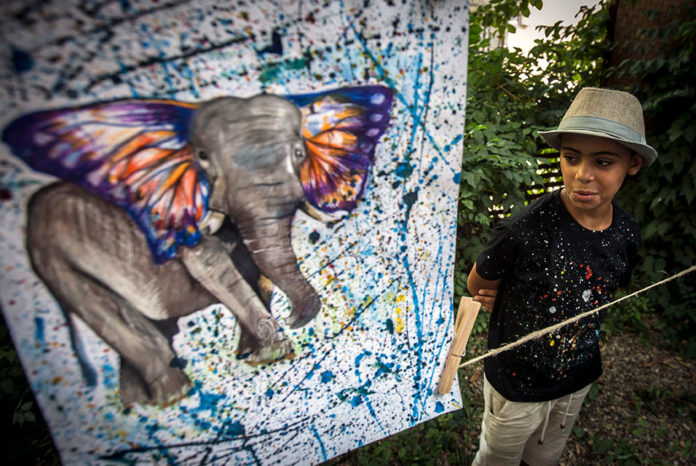 A 10-year-old Afghan refugee dubbed “Little Picasso” exhibited his paintings and photographs in Belgrade on Wednesday, hoping to raise money for a Serbian child’s post-cancer therapy.

Farhad Noory has lived in a refugee camp in the city with his parents and two younger brothers for eight months, during which time his paintings of famous people have made him a local media star. 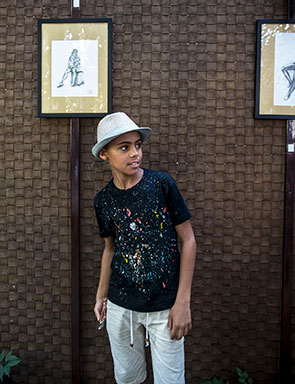 Noory’s family were part of the huge wave of migrants from South Asia, the Middle East and Africa hoping to start new lives in western Europe in recent years, but they got stuck in Serbia after the so-called “Balkan route” was shut down in 2016.

The boy’s gift for art was spotted during language and painting workshops in Belgrade that was organized by local aid groups for refugees and migrants.

“We quickly realized how talented he was and sent him to a painting school as well as a three-month photography workshop, so this is a retrospective of what he learned there,” Edin Sinanovic from the Refugees Foundation, a local NGO, told AFP.

In addition to holding his first exhibition, “Farhad wanted to help someone, so he chose to dedicate it to a six-year-old Serbian boy who needs funds for his therapy after brain cancer,” Sinanovic said.

Being kind
Dressed in a black T-shirt and jeans, Noory, who speaks just a little English, admitted that he was “feeling stressed” at his first exhibition.

The smiling young artist said he wanted to help a child in difficulty because “we need to be kind”, and he hoped to meet the boy for whom he was fundraising.

At the one-day exhibition in a cafe in central Belgrade, extra donations were collected in an old guitar case.

Noory was to keep the proceeds from his original paintings, which were auctioned with a starting price of 2,500 dinars.

His family is among the 4,500 migrants currently staying in 18 state-run camps in Serbia. Some 40 percent of them are children, according to Ivan Miskovic from the government’s refugee agency.

“They have taken a long, difficult, serious and dangerous trip,” Miskovic said, pledging to help Noory “develop his gift”.

The youngster said he would like to go to Switzerland to study painting and languages, and the official expressed hope that the migrants would eventually reach their preferred destinations.

“As long as they are in Serbia we will do our best to provide them with everything we can,” Miskovic said.