Robert Longo’s art has always had a political dimension. He is looking for a visual balance between nature and politics, social and personal. Robert Longo combines a sense of humanity with a sense of justice, exposing the politics of power, futility, and aggression.

He created a personal fusion of pop and concept art, reinforced by a sense of political relevance. His title for this exhibition, Storm of Hope, expresses his desire for a better future beyond the storm. Longo’s work guides the world we live in and how we see it. Countering the image storm that surrounds us, he creates iconic and provocative works based on the daily flow of images on our screens. 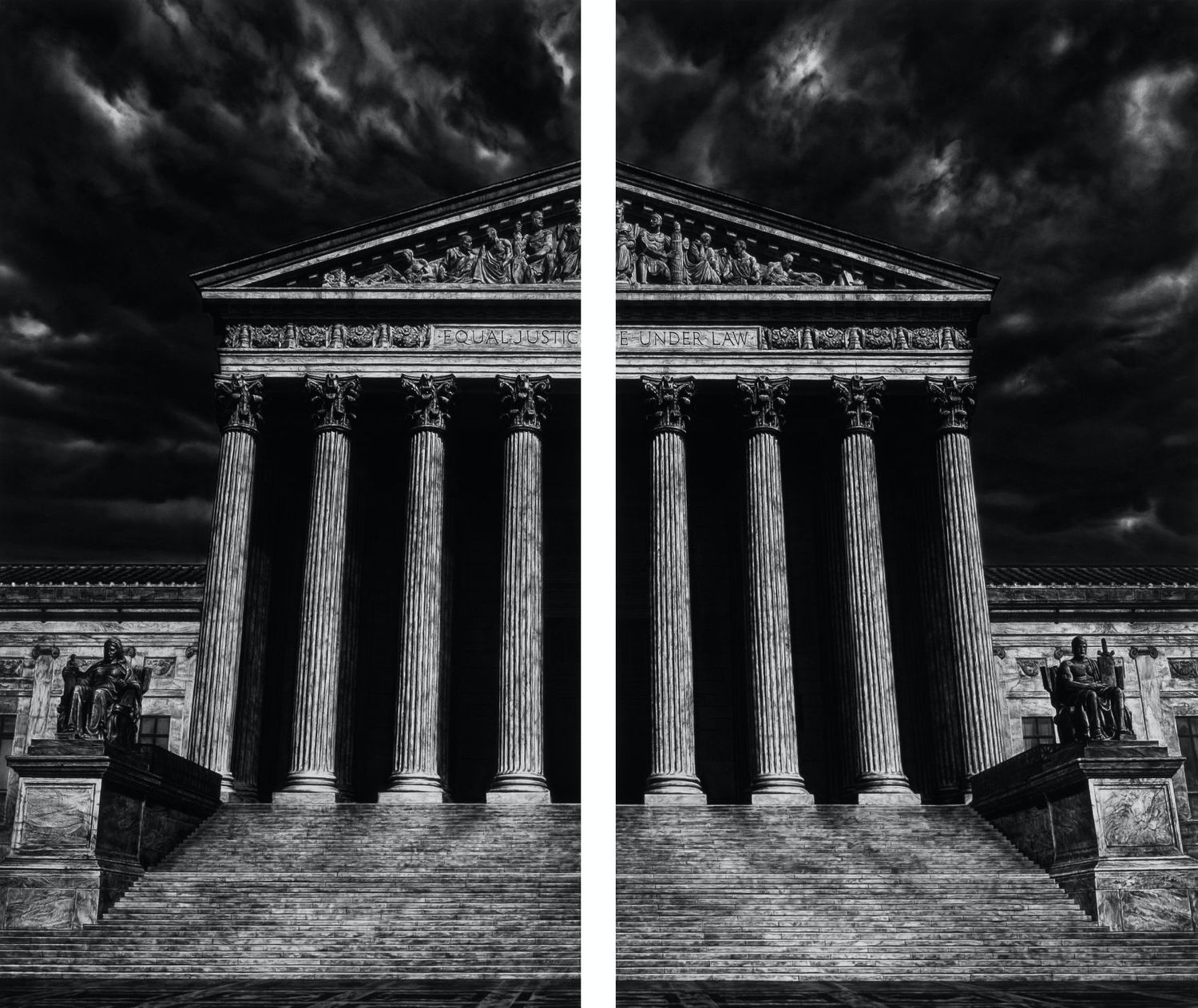 He views his large-scale drawings as monuments that provide a sense of permanence that transcends the flow of transient images. Longo quotes his version of Cassandra’s curse: “Artists can see the future, but will people listen?”

Explaining the genesis of why his massive drawings are displayed behind glass, Longo recalls that he grew up on television, in black and white. All the images that he saw during the formation of his life were always behind glass. Now we are flooded with images behind glass on different screens.

Drawings by Robert Longo are created using charcoal, an ancient material, using one of the oldest art media to create hyper-realistic modern images. The drawings are so carefully created that they are sometimes mistaken for photographs.

The word drawing, however, does not sound right: Longo’s charcoal on paper can be 11 feet high and 38 feet long, which is the size of historical paintings. Each image is actually the product of months of painstaking work based on the original images that have been heavily modified to create an image that becomes a memory that expresses something beyond itself.

Robert Longo loves the way coal slows down the process. The artist appreciates the irony of creating monumental images from dust.

The three pillars of the USA government, the Capitol, the Supreme Court, and the White House, are the highlights of Longo’s epic three-part work exhibition. 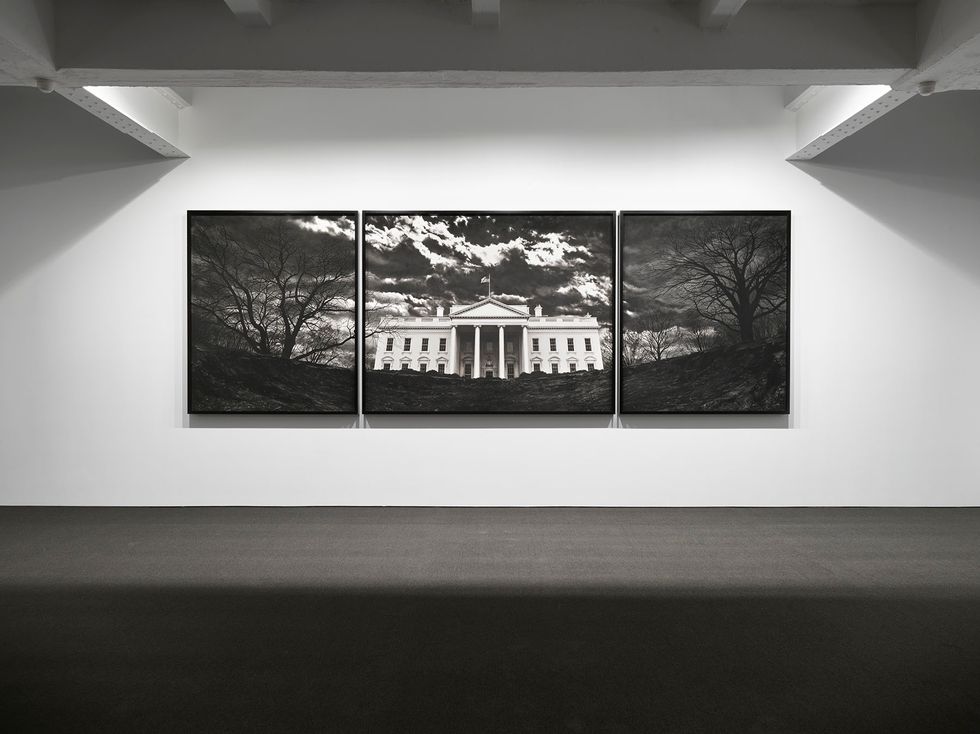 His image of the Capitol creates the illusion of the building moving towards the viewer. The Supreme Court appears before a stormy sky. The building is cracking apart like the Gordon Matt-Clark house and appears to be falling into disrepair. Meanwhile, the White House is depicted from a crater on the front lawn, and an ominous, gnarled forest grows around it.

The exhibition will also showcase one of Longo’s most famous and well-known works: the Death Star, made from 40,000 .30 caliber bullets used in AR-10 assault rifles. The number of bullets matches the number of deaths from firearms in the United States in 2017 when Longo began fabricating the work. He used an algorithm to randomize the bullets, representing chaos while avoiding a given pattern.

The exhibition also provides a powerful overview of Longo’s last three series – The Space Gang, The Cycle of the Destroyer, and Fugitive Images – from his black-and-white translation of Jackson Pollock’s Convergence to the Wall of Moms. During the protests in Portland 2020.

In each of these collections, Longo continues the tradition of artistic political engagement in the present. Storm of Hope is Robert Longo’s first Los Angeles exhibition since his 2008 show at the Margot Livin Gallery.

His work was the subject of a large survey exhibition at the Los Angeles County Museum of Art in 1989. Jeffrey Deitch was the model for one of Longo’s influential triptychs, People in Cities, in 1980.

I lift the drawing from the ‘secondary’ status, making it the scale of large paintings

Although Robert Longo has worked in a variety of media, including performance, photography, sculpture, and painting, he is best known for his large-scale hyperrealistic charcoal drawings, reflecting the creation of symbols of power and authority. 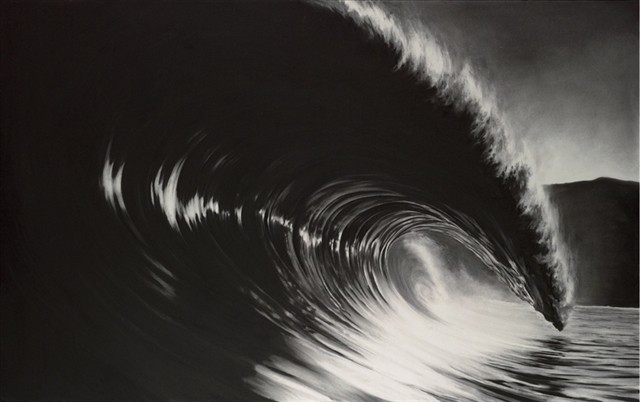 Inspired by Carl Jung’s view of the collective unconscious, he explores the effects of living in an image-rich culture – how we filter, store, and process the images that bombard us daily. The narrative power and emotional impact of his work stem from the transformation of an intimate drawing practice into the monumental scale of painting, as well as the meticulous detailing he achieves with charcoal.

Longo’s work is often drawn from media sources that reflect current events and socio-political issues, including war, protest movements, immigration, and climate change. In parallel with this, he created several series in which “absolutes” are depicted at the moment of their incarnation, such as bomb explosions, wave run, the breakthrough of sharks, or blooming roses. 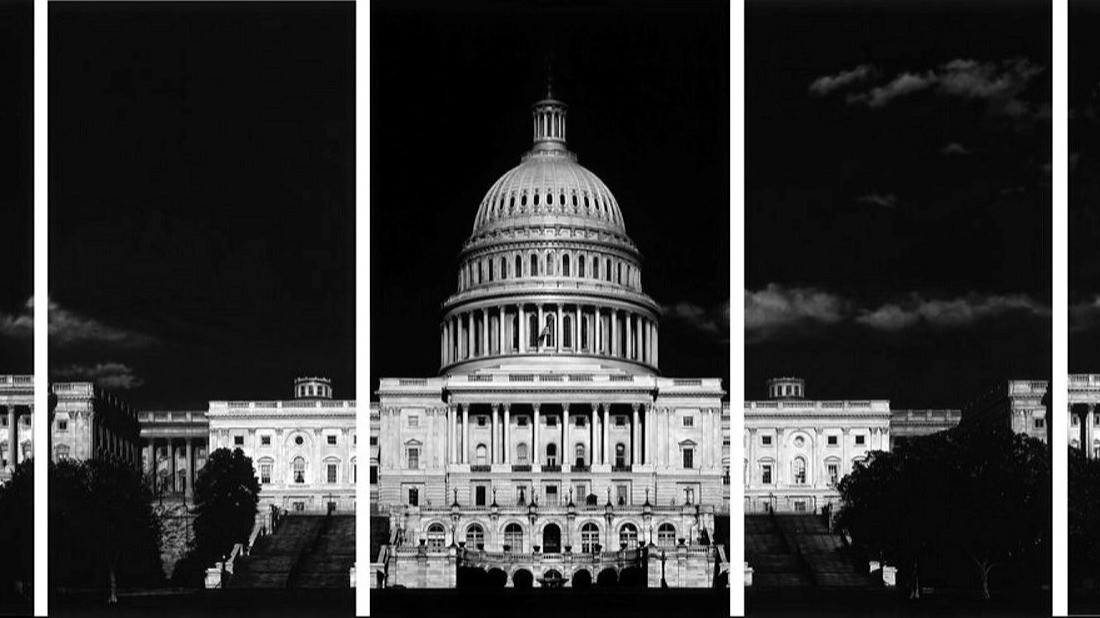 Robert Longo is also engaged in art history. He calls it Forensic Distance, reimagining paintings by the abstract expressionists, Rembrandt, Pablo Picasso, and Vincent Van Gogh, among others.

Since 2015, he embarked on a series of drawings based on X-ray images of masterpieces such as Edouard Manet’s Bar at Folies-Bergere (1882), in search of the “truth” of an image beyond its appearance. 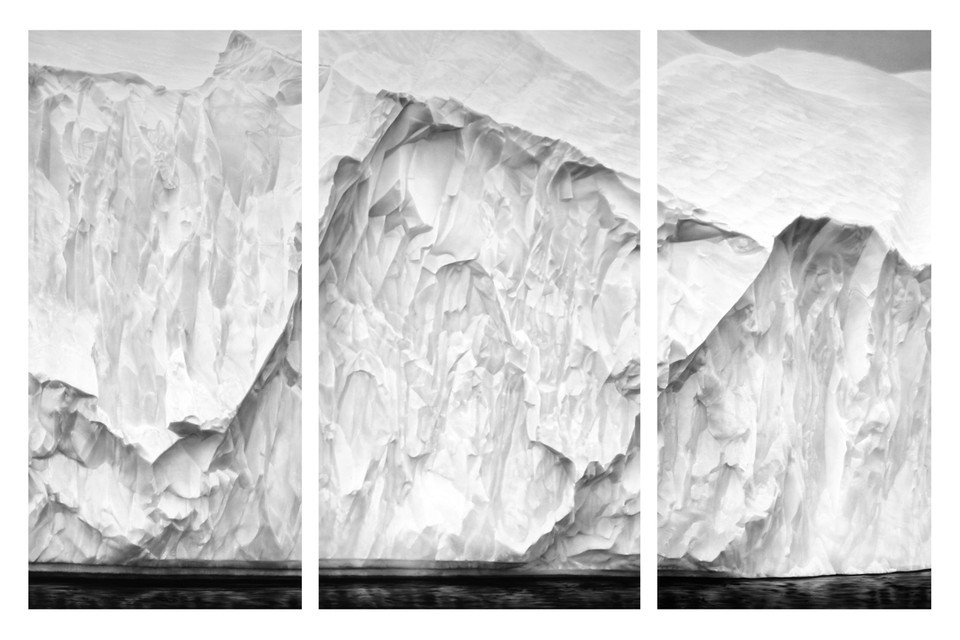 Robert Longo uses light and darkness to achieve a dramatic emotional range in his charcoal drawings. Rearranging the environment is critical because a photograph is recorded in the blink of an eye [but] it takes months to create a drawing, which changes the attitude of both the artist and the viewer to the image.

He adapts his technique to reflect the characteristics of the original photograph, capturing the pixelation of a telephoto lens or the sharp edges of a bullet hole in the glass. According to Robert Longo, this forensic examination of the image allows him to assimilate it at the molecular level, which, combined with the intimacy of the medium, represents a sincere attempt to slow down the image, provoke the viewer to its full power.

Robert Longo was born in New York. There, he lives and works. The artist graduated from State University College Buffalo. After that, he moved to New York. He became an assistant at the studio of Vito Acconci and Dennis Oppenheim.

Robert Longo took part in the five-person show called Pictures. This was followed by his first Longo`s solo exhibition in 1981. It featured the drawings of People in Cities, which marked the beginning of his early career.

Works by Robert Longo have been shown alongside that of Francisco Goya and Sergei Eisenstein at Proof, who traveled from Garage Moscow Museum of Contemporary Art (2016) to the Brooklyn Museum in New York (2017) and Deichtorhallen Hamburg (2018).