Home Exhibitions At First The Collection Of French Paintings Of 18th Will Be Presented...

When Joseph Bonaparte, elder brother of Napoleon I, fled to America in 1815, he packed his collection of 18th-century French painting. In an effort to spread his native country’s culture across the United States, he put his works on public display, causing a sensation and inspiring a new American fascination with French art. From then on, such works made their way into museums and private collections from coast to coast. America Collects Eighteenth-Century French Painting, on view in the West Building of the National Gallery of Art, Washington, from May 21 through August 20, 2017, is the first survey of American taste for French painting of the period. Presenting 68 of the finest examples found in American museums today, the exhibition tells the story of the collectors, curators, museum directors, and dealers responsible for bringing the paintings across the

Atlantic and into the collections they now call home.

Rococo and neoclassical masterpieces from all corners of the United States—from Pittsburgh to Indianapolis and Birmingham to Phoenix—are brought together for the first time. On view with works originally held by Joseph Bonaparte and the marquise de Pompadour, are decorative canvases by François Boucher and Jean Honoré Fragonard, portraits by Jacques Louis David and Élisabeth Louise Vigée Le Brun, landscapes by Hubert Robert, and still lifes by Jean Siméon Chardin and Jean-Baptiste Oudry. The selection emphasizes works by less familiar names, women artists, and one of the earliest mixed-race artists in the Western canon. It also explores various themes popular with late 19th- and early 20th-century American collectors—from fêtes galantes to the art of the Enlightenment—and how those genres continue to be acquired today.

“We are delighted to welcome these masterpieces from across the country to the nation’s capital,” said Earl A. Powell III, director, National Gallery of Art, Washington. “As the sole venue, the Gallery has the privilege of offering our visitors a chance to see some of the finest examples of 18th-century French painting found in America. The exhibition and catalog are a significant contribution to scholarship not just of American museums and collectors but of 18th-century French art as a whole.” America Collects is divided into eight sections, each focusing on a different category of American taste. First is the vision of France that appealed most to Americans in the 19th century: the romantic rococo. As a mistress to Louis XV, Jeanne Antoinette Poisson, the marquise de Pompadour, commissioned lush paintings by Boucher and Jean-Baptiste Greuze among others. On view are works from her collection, including Boucher’s luxurious portrait of Pompadour as well as his The Toilette of Venus from the Metropolitan Museum of Art and The Bath of Venus from the National Gallery of Art, originally painted in 1751 as pendants for her bathroom at the Château de Bellevue and reunited for the first time since the 18th century. The next section focuses on depictions of love, which, despite their varied subjects and settings, were consistently popular among American viewers. On loan from the Frick Art & Historical Center in Pittsburgh is Fragonard’s painted sketch for part of his Progress of Love ensemble, a series originally created for the pleasure pavilion of another mistress of Louis XV, Madame du Barry. Other works include Noël Nicolas Coypel’s Abduction of Europa (1726–1727) from the Philadelphia Museum of Art, which was a parting gift from Joseph Bonaparte to his friend, the American general Thomas Cadwalader, and Louis Rolland Trinquesse’s An Interior with a Lady, Her Maid, and a Gentleman (1776) from the Wadsworth Atheneum Museum of Art.

Opulent portraits of the period’s courtiers, pageboys, housewives, and financiers make up the exhibition’s next grouping. The ornateness of the dress and surroundings in these paintings offered American collectors a window into the lavish French lifestyle. Nicolas de Largillierre’s Portrait of Marguerite de Sève, Wife of Barthélemy Jean Claude Pupil (1729), from the Timken Museum of Art in San Diego, joins Jacques Louis David’s Portrait of Jacques François Desmaisons (1782) from the Albright-Knox Art Gallery in Buffalo, NY. The latter had been passed down through generations descended from Desmaisons, an architect to Louis XVI, before being purchased in 1905 by the French-American financier David David-Weill and then acquired by the Albright-Knox in 1944 through Wildenstein and Co., Inc., a gallery responsible for bringing many of the paintings on view to American audiences. Another lesser known gem is Marie Victoire Lemoine’s Portrait of a Youth in an Embroidered Vest (1785) from the Cummer Museum of Art & Gardens in Jacksonville, Florida.

America Collects continues by exploring both playful and fanciful sides of the era through paintings such as Antoine Watteau’s Perfect Accord (1719) from the Los Angeles County Museum of Art. Also on view is Joseph Ducreux’s Le Discret (c. 1791), a little-known self-portrait which was the first work by this artist—a court painter to Marie-Antoinette—to enter an American collection when it was acquired by the Spencer Museum of Art at the University of Kansas in 1951. A section on masquerade features Drouais’s Portrait of Carlos Fernando FitzJames-Stuart, Marquess of Jamaica (1765), from the Birmingham Museum of Art. Long considered a portrait of Madame du Barry in costume, recent research revealed the actual subject to be a young Spanish nobleman.

Artists trained at the French Royal Academy are the focus of the following section. Two works by Elisabeth Vigée Le Brun, accepted into the prestigious institution thanks to the support of Marie-Antoinette, include The Artist’s Brother (1773) from the Saint Louis Art Museum and Self-Portrait (c. 1781) from the Kimbell Art Museum. On loan from the Worcester Art Museum is Guillaume Lethière’s Girl with Portfolio (c. 1799), a portrait by one of the few mixed-race artists to find success at the French academy.

The exhibition closes with two somber themes of interest to Americans. First are neoclassical paintings of Greek heroes such as Pierre Peyron’s Death of Alcestis (1794) from the North Carolina Museum of Art and Jean-Antoine Théodore Giroust’s Oedipus at Colonus (1788) from the Dallas Museum of Art.

Finally, the spirit of Enlightenment is evident in paintings that document nature or the passage of time. For instance, Hubert Robert’s Octavian Gate and Fish Market (1784) is an architectural fantasy that is now believed to be the prime version of a similar composition at the Musée du Louvre, Paris. Owned in the late 19th century by Henderson Green of Hyde Park, New York it is one of the earliest 18th-century works to come to America, and is now in the collection of the Frances Lehman Loeb Art Center at Vassar College. 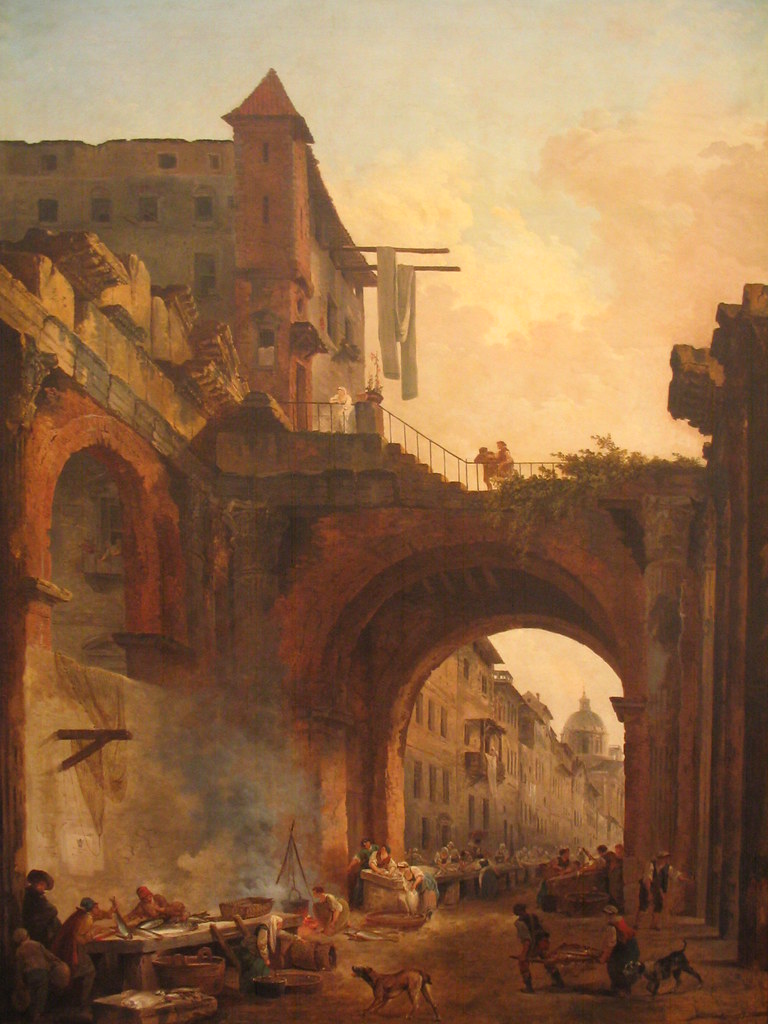 Photo Project “My God”: Objects or Their Souls?