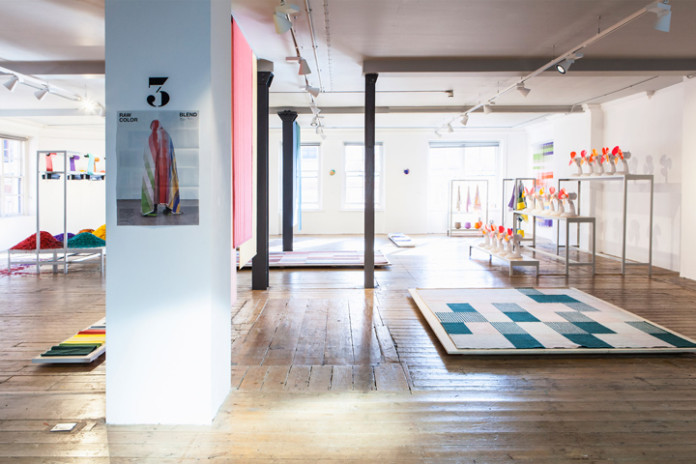 The Fans installation features three shelves of fans, each with a trio of blades in contrasting yellow, orange and reds, which blend into one another once set in motion. “Maybe you can compare it with flavour,” said the studio. “Something sweet might taste boring but by adding a bit of salty or sour flavour, it makes the taste deeper and richer. This is what we like in colours too.” Chromatology also relies on movement, responding to the presence of visitors to create a brightly coloured rain of paper from a series of hanging shredders. As more passersby come and go, a mountain of paper builds up underneath each shredder. The studio has also investigated textiles, with a series of blankets that show how different shades are woven into fabric. This follows on from the studios previous experiments with textiles, which include bleaching patterns into scarves using a custom printer. Other highlights from the exhibition include a set of brightly coloured clocks made from graphic patterns, described as “somewhere between a kinetic object and a functional timepiece”. There is also a series of photographs that have been translated into geometric paper compositions.