Home Exhibitions Duchamp Did Not Invent the Readymade. In Fact, It May Have Been... 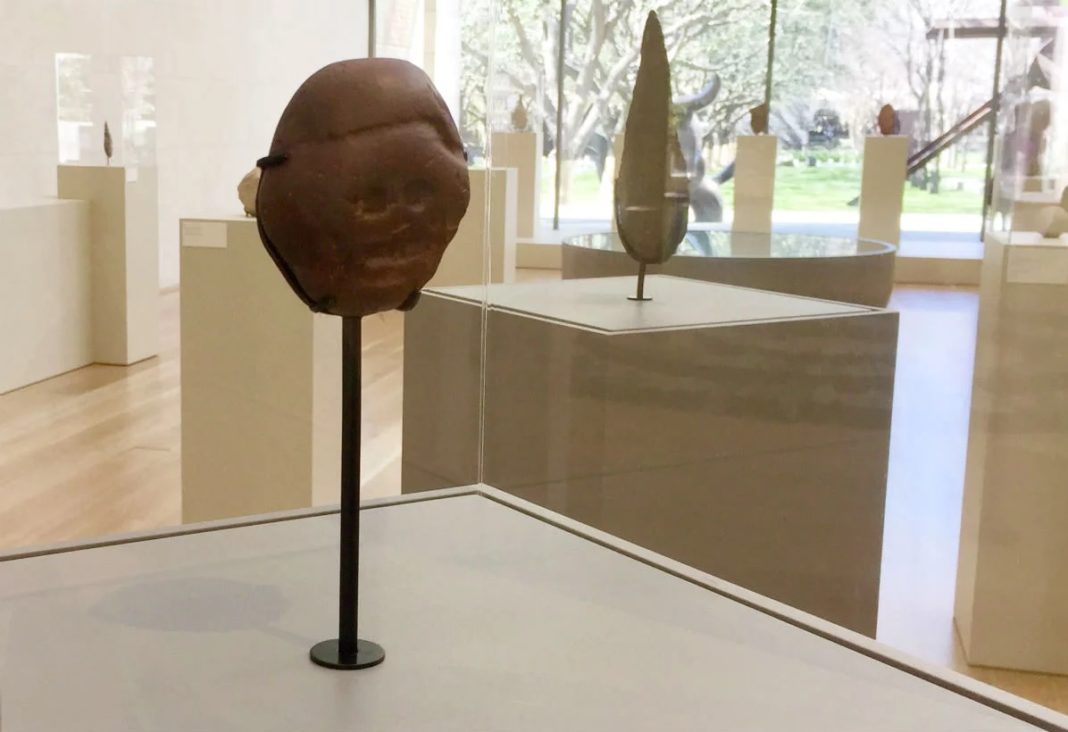 When you think of the oldest art, in all likelihood, you think of the cave paintings of Altamira or Lascaux, with their spooky, frozen, frolicking bison and stags. These images are to art history what the opening scene of 2001: A Space Odyssey is to material culture in general: the mythic starting point for a long, mystery-shrouded evolution. This is part of why I find “First Sculpture: Handaxe to Figure Stone” at the Nasher Sculpture Center in Dallas so cool. It smashes that narrative like an ape bashing a skull with a bone hammer.

The show, the product of a team-up between artist Tony Berlant and anthropologist Thomas Wynn, claims to be the first museum exhibition to focus on the specifically aesthetic appreciation of these particular ancient objects. Among other things, “First Sculpture” contains a selection of the “Boxgrove Handaxes,” stone instruments found in England that are believed to be the first group of artifacts that identifiably come from the same maker. Which is a brain-bender in and of itself—to recall that, somewhere in the swamp of prehistoric time, there existed a first instance when identifiable, individual ways of making came into focus.

But the teardrop-shaped handaxes are not, actually, what most interests me about this show. What interests me most is the phenomenon “First Sculpture” highlights of so-called “figure stones.” That is, stone objects that seem to have been collected because they contain patterns resembling faces or animals. In essence, the show makes the claim for a kind of primal found-object sculpture, to use a contemporary term—or, in cases where the found image was accentuated through carving around it, what we would now call “altered readymades.”

Take the renowned Makapansgat Pebble, aka “The Pebble of Many Faces,” described succinctly as “an unmodified, natural pebble of jasperite.” It doesn’t look like much to modern eyes, but the hypothesis is that it must have been interesting to our distant ancestors because it was found at a site in South Africa, a part of the so-called “Cradle of Humankind” north of Johannesburg, where jasperite is not otherwise found. The small rock unmistakably resembles a face, with two gaping eye sockets and an indent that could be a mouth: a Stone Age emoji. (It can also be flipped to see another kind of face.)

In Cave of Forgotten Dreams, his 2010 documentary about the Chauvet caves and their enigmatic images, Werner Herzog intones in his raspy, gloriously portentous way, “It is as if the modern soul had awakened here.” That’s a common sentiment, and clearly the kind of image-making found in rock art is decisively important for the history of consciousness. But the murals at Chauvet—among the oldest painted images we know (the Suluwesi Caves in Indonesia have recently redrawn the map)—are thought to be 30,000 to 32,000 years old. The Makapansgat Pebble is more like 2.5 to 3 million years old, depending on whom you ask.

“Pareidolia” is the name of the mental phenomena of seeing pictures or patterns in randomness. Facial recognition is key to communication, and thus survival, among social primates, and so recognition of face patterns is pretty fundamental to the way the brain works, shared between modern humans and the Australopithecus who would have collected the Pebble. It is also the basis for everything from the medieval perception of Jesus’s divine manifestation in the Shroud of Turin to our ability to intuit that that a round yellow spot with two dots and a curved line resembles a smiley face.

In the exhibition catalogue, the organizers of “First Sculpture” ground their creative appreciation of its objects in “neuroaesthetics,” a discipline that I am really only half here for. Evolutionary psychology’s revelations often seem to me to perform the bait-and-switch of using assumptions about how the deep past shaped the brain to provide a master key for the present while simultaneously importing present biases back into its picture of prehistory (e.g. it will tell you that a low waist-to-hip ratio represents a natural beauty standard for women, even though beauty standards are considerably more culturally and historically flexible).

Generalizing about something like “aesthetics” seems doubly dubious, since it has only had its modern sense as an independent sphere of contemplation for two centuries or so—not even a blip in the life of a species like Australopithecus, which walked the earth for over 900,000 years. (Homo sapiens has so far managed less than a quarter of that, and the prognosis does not look good.)

I am nevertheless delighted by the Nasher’s hypothesis about “figure stones” because it corrects for another kind of psychobiological/aesthetic argument. You see, the idea that the primal act of creativity is making is sometimes used as an argument against contemporary art, implying that conceptual art violates some deep cognitive law of beauty, thought to be tied to an appreciation for virtuosic acts of crafting. Without making claims for priority or primacy—again, projections into pre-history tend to shade over into fables—it is clear that finding meaning in the world has a very, very fundamental significance.

What could seem more ultra-contemporary than the notion that the act of selection is creative in and of itself? Yet in a way, the labor of discovering the useful and the meaningful in the environment around you must have been much more powerful before the time of manufactured objects made for use and photography that rendered resemblance with indexical precision. Making meaningful form was arduous; finding it must have seemed miraculous. In some cases, the latter may have inspired the former.

Maybe it’s wrong that I would find these ancient artifacts most intriguing through this narrow contemporary lens. Then again, the enduring pleasure of recognizing the familiar, staring back at you from an unexpected place, is exactly the show’s point.

“First Sculpture: Handaxe to Figure Stone” is on view at the Nasher Sculpture Center through April 28, 2018.