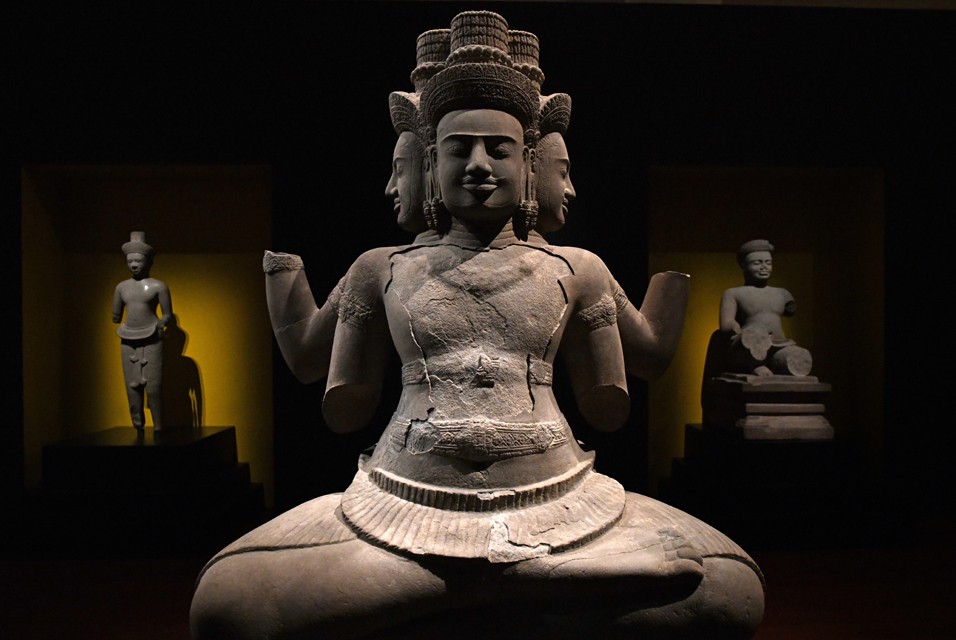 Angkor is widely considered to be among the world’s most magnificent architectural masterpieces – its extensive complexes and detailed stone carvings have intrigued innumerable travellers, scientists, historians, and archaeologists since its sensational re-emergence onto the world stage in the late 19th century. The Asian Civilisations Museum welcomes visitors to re-discover the art, architecture, and legacy of this ancient city through its special exhibition Angkor: Exploring Cambodia’s Sacred City. Masterpieces of the Musée national des arts asiatiques-Guimet. The exhibition showcases more than 140 sculptures, watercolours, drawings, and historic memorabilia from the Musée national des arts asiatiques – Guimet (Guimet Museum), one of the premier Asian art museums in Europe. Open to public viewing on April 8 to July 22.

Angkor: Exploring Cambodia’s Sacred City kicks off ACM’s Year of Southeast Asia, which features exhibitions dedicated to Southeast Asian art, culture, and heritage. The special exhibition is a collaboration with the Guimet Museum, and features the largest-ever display of its masterpieces in Asia. Objects range from exquisite Khmer sculptures architectural elements in stone and bronze dating as far back as the 6th century, to drawings, rare photographs, and memorabilia made by the French in the 1800s and 1900s. This is the first time that ACM is presenting an exhibition on Angkor.

Mr Kennie Ting, Director of the Asian Civilisations Museum, said, “Khmer civilisation is one of the greatest in Southeast Asia and the world, and Angkor is a UNESCO World Heritage site. We wanted to bring this world heritage to Singaporean audiences, so they can experience first-hand both the beauty and timelessness of Khmer Art, as well as how Angkor and the Khmers captured the imagination of the world. “

“ACM’s mission is to explore encounters and connections between civilisations in Asia, and so this exhibition has a cross-cultural, East-West perspective, presenting not only the splendours of Khmer art and civilisation, but also works of art related to the French encounter with Angkor and their reintroducing Angkor to the world in the late 19th and early 20th century. The exhibition is accompanied by contemporary artworks by a Cambodian artist, as well as an academic conference, festival, talks, and other programmes. We hope local audiences and visitors gain a stronger understanding of Khmer and Cambodian heritage and culture, and are inspired to go visit Angkor itself, if they haven’t already.”

Angkor’s renown outside Asia grew largely due to the French missions of 1866 and 1873. Much of these initial efforts can be credited in particular to the watercolours made by French explorer and artist Louis Delaporte, and photographs by his countryman Émile Gsell. The first section of the exhibition showcases photographs, watercolours, prints, architectural drawings, rubbings, and mouldings of temple facades made by Delaporte, Gsell and other early French explorers. They provided Europe an eye into the region, which in turn helped to greatly enhance international knowledge and awareness of Angkor. Of special note are the plaster casts made in the late 1800s by French explorers in Angkor. One of the casts in the exhibition is the only remaining record of a bas-relief scene destroyed when a wall collapsed in the 1940s.

The second part of the exhibition features masterpieces of Khmer art from the Guimet Museum. More than 50 sculptures provide an overview of progression of Khmer art and artistry, illustrating the skill of Khmer craftsmen as they transformed raw stone into striking sculptures that capture delicate facial features, elaborate drapery, and the soft realism of the body. Visitors will be able to examine up close, stunning pieces that depict the various deities from Angkor’s Hindu and Buddhist pantheon, while learning about Khmer faith and cosmology.

The Guimet Museum’s president, Ms Sophie Makariou, said, “The Guimet Museum is a custodian of one of the largest collections of Asian art. Working with the Asian Civilisations Museum allows us to re-introduce the stories behind these precious artefacts of world heritage to Singapore and Asia, and provide greater clarity to what we know of this UNESCO World Heritage site and the once powerful Khmer empire. We hope to continue to share this with other audiences across the world.”