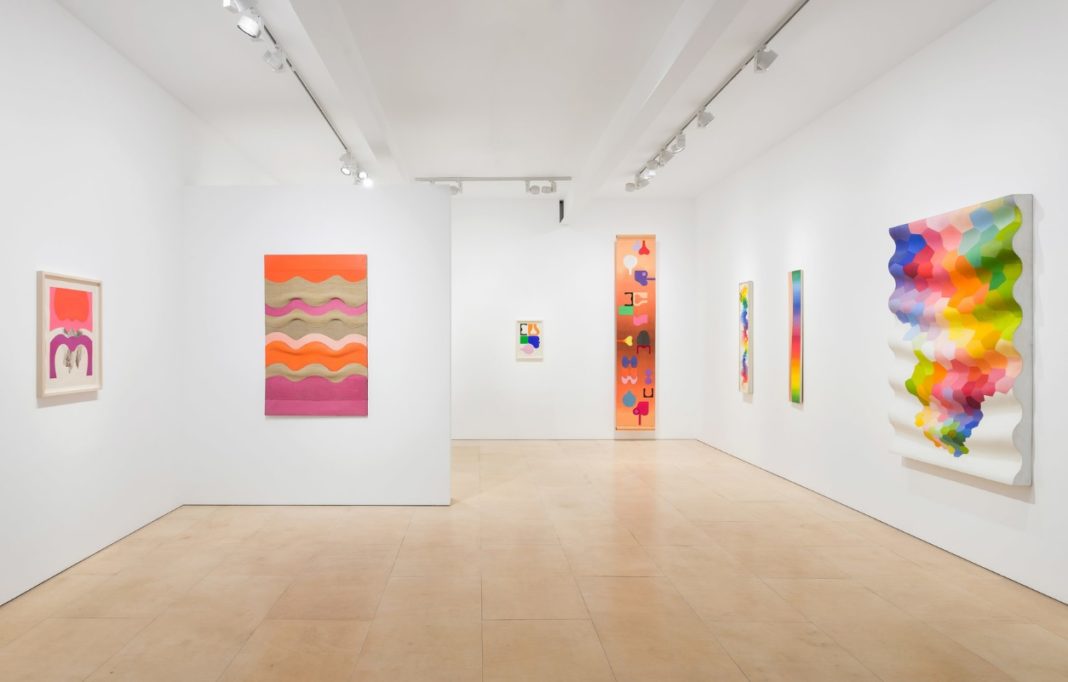 Stephen Friedman Gallery is presenting Hungarian artist Ilona Keserü’s first solo exhibition in London. Following her inclusion in the gallery’s Frieze Masters presentation in October 2017, this exhibition includes drawings, objects and paintings from the 1960s to the early 1980s.

Keserü was born in 1933 in Pécs, Hungary and created a diverse body of work that has rarely been seen outside Eastern Europe. She is one of Hungary’s leading post-war abstract artists. Her career spans over seventy years and her work expresses power and strength in the face of political and cultural adversity. Pioneering a visual language that explores material, colour and the body, Keserü’s use of colour and recognisable soft forms draw comparison to Eva Hesse, Louise Bourgeois and Judy Chicago. 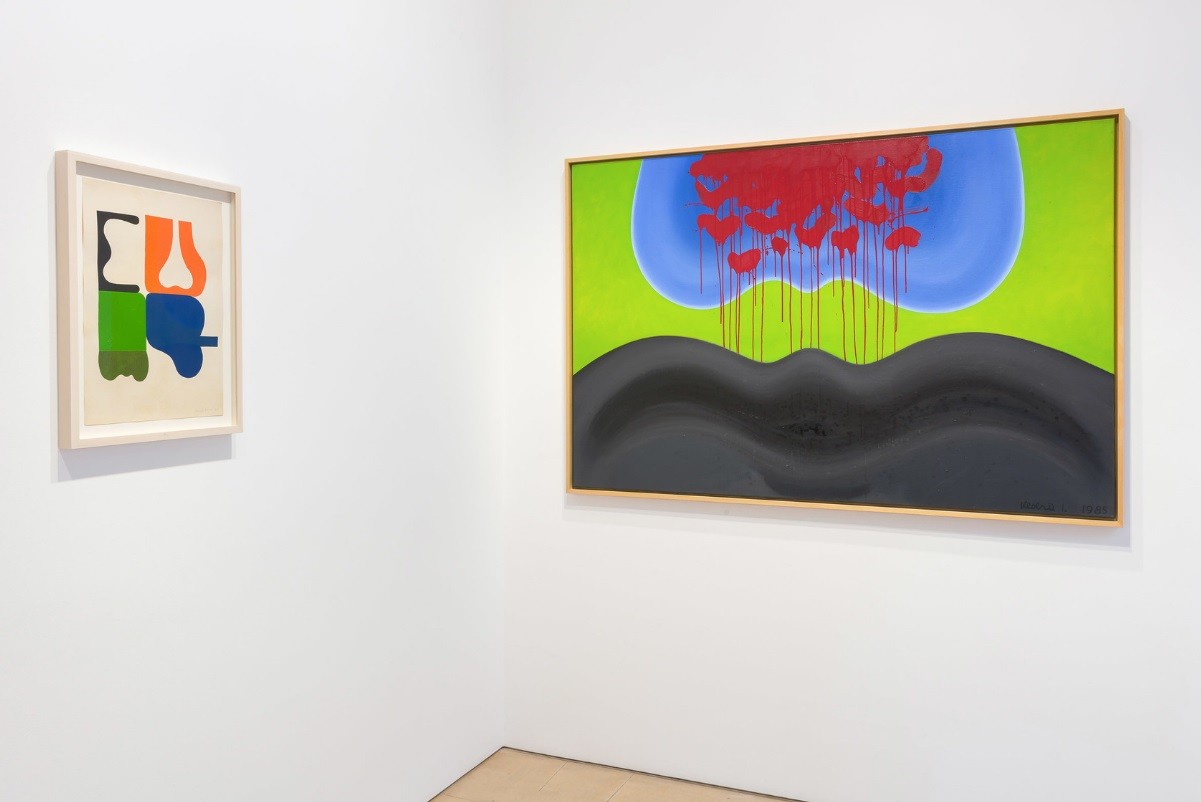 In 1962 Keserü lived in Italy. She learnt about new shades of paint and approaches to material and form. The trip altered her approach to painting forever – “as if all that had gone before had been cut off”.

Over the last five decades Keserü made a body of abstract work driven by modern life. Two of the earliest and most personal works in the exhibition (both 1965) use lace gifted to her by her aunt. ‘Television’ is a playful mixed media collage depicting a television screen. An undulating line suggests televisual static. In the painting ‘In Memory of an Actress’ a lace collar produces a bodily halo. The collar previously belonged to Hungarian actress Mari Jászai. This choice of unusual and evocative textiles demonstrated how her work from 1965 onwards adopted everyday materials and readymade shapes. 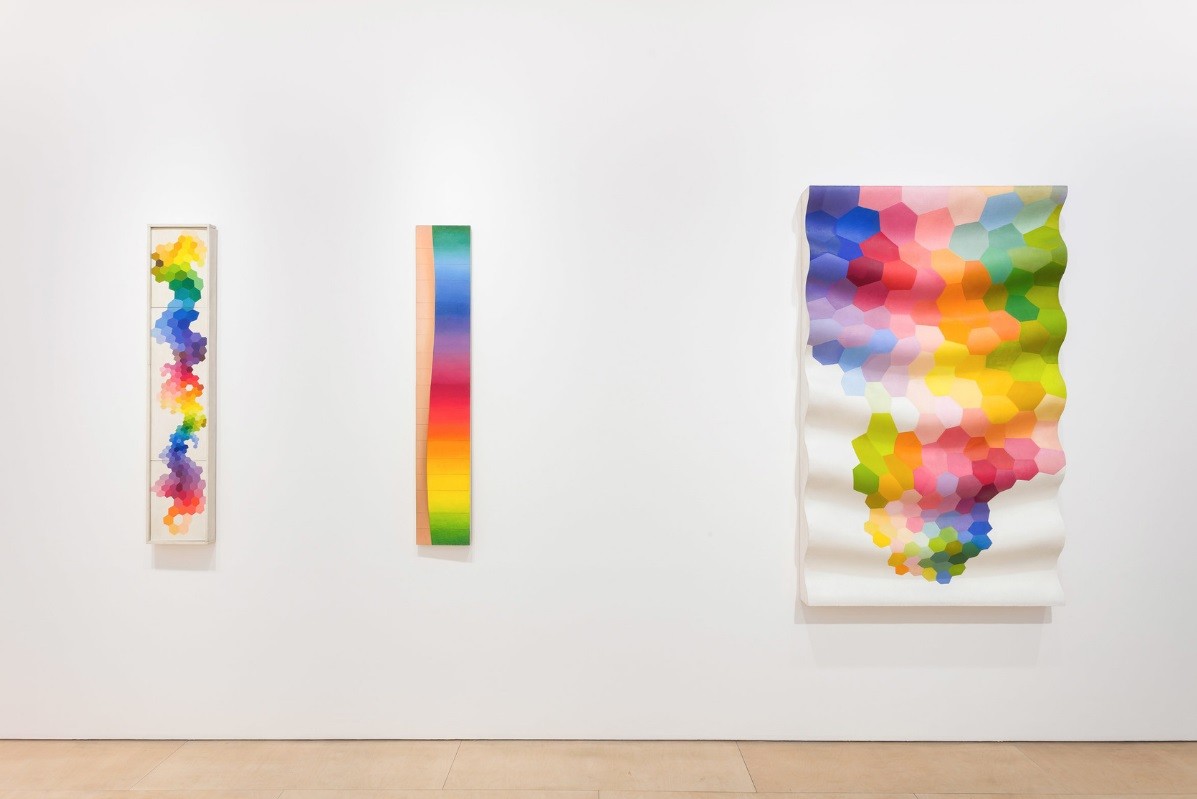 In 1967 Keserü discovered the heart shaped headstones of Balatonudvari cemetery, Hungary. Since then she reproduced this shape many times in drawings, paintings and objects. By inverting and overlaying the motif, Keserü transformed the tombstone into rolling field landscapes and sensuous figurative studies. 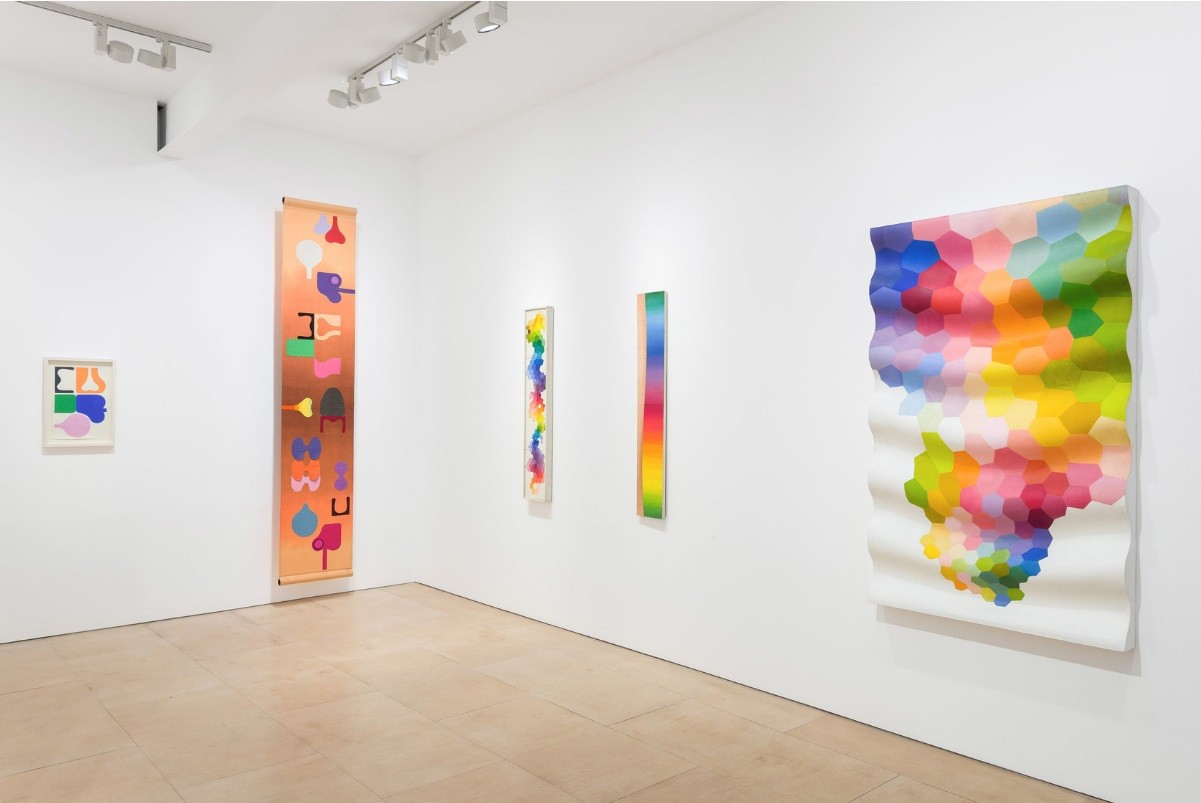 In a series of three-dimensional works from 1970 Keserü used string as a sculptural material. Encased in small glass bottles, volumes of string bring to mind the interior of a human body. Produced in the same year, ‘Engaged Column’ is a free-standing fibreboard column. Keserü applied paint, stitch work, canvas and a tangled line drawing of string to the column. The eddying circles of layered string create a sculptural surface of entwined forms and shapes. 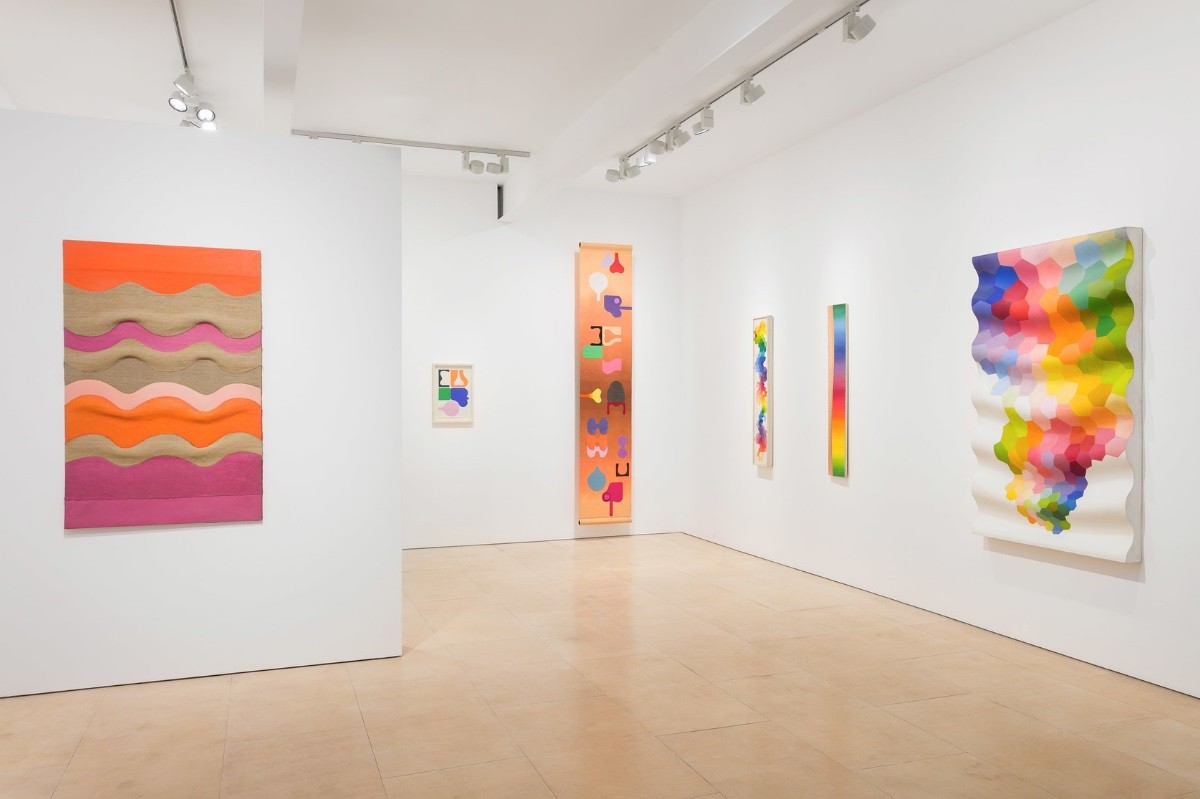 One of the largest works in the exhibition is ‘Pendant Object (Suspended)’, 1981: an imposing three-metre-high hanging composition of organic forms stitched onto dyed linen. This work reflects Keserü’s later manipulation of the tombstone shape into a variety of striking elongated and abstract colour symbols. In some cases, she cut out symbols of corresponding forms, producing both a hollow silhouette in the larger form and a new symbol. Keserü then adhered the elements to a vivid twodimensional relief. 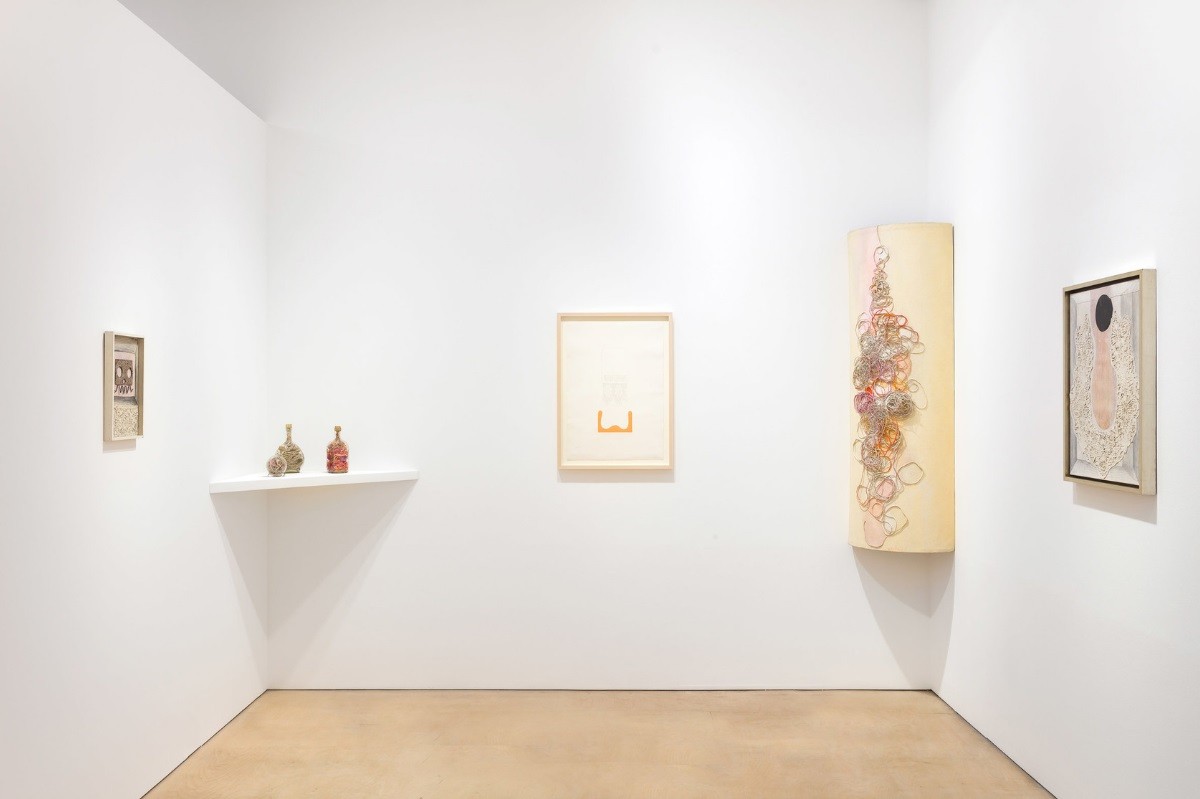 Keserü believed that by reducing the natural world into a series of signs and forms, one gains a greater understanding of life. Her unique artistic language and peerless ability to render colour and form confirms Keserü as a leading figure in the international history of abstraction.

New Anna Karenina Musical Is in The Works