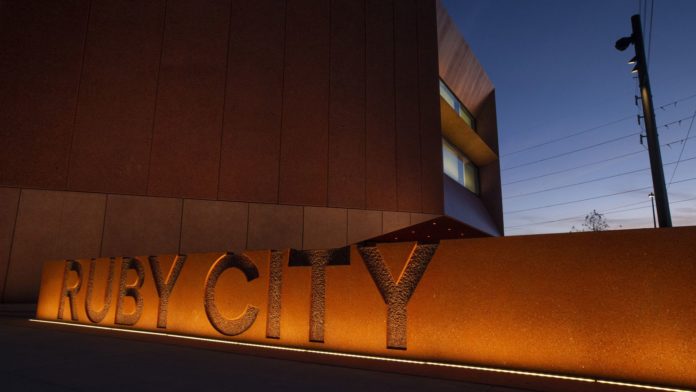 The history of the Ruby City, a historical museum designed by world-renowned architect Sir David Adjaye, begins with the lucid dream of a dying woman.

In the spring of 2007, 62-year-old Linda Pace, the legendary patroness of contemporary art in San Antonio, realized that breast cancer diagnosed months earlier was likely fatal. All the money in the world couldn’t keep a woman born into the Pearl beer and Pace Foods families alive long enough to complete her latest project – a permanent home for her art collection.

Linda Pace wanted to make plans for the museum inevitable before her time was up.

In 2007, Texas hot sauce heiress, collector and artist Linda Pace awoke from a dream dominated by a glowing red structure that reminded her of the Emerald City in The Wizard of Oz, albeit in a different shade. She quickly grabbed a notebook and drew a vivid image.

According to the creative method and cosmology that she joined, this meant that she had dreams.

For decades, Pace kept paper and a large container of crayons by her bed to take better pictures before they fade from memory upon awakening. Therefore, when she had visions of her museum before Ajaye’s arrival, she was ready. The dream of Ruby City was not just an accident – it seemed to spark this dream.

Kelly O’Connor, head of collections at Ruby City, a new free-admission contemporary art center inspired by a dream that opened in San Antonio, Texas, says she had a deep passion for dream analysis. Linda Pace studied Carl Jung a lot and made her dreams a part of her artistic practice, drawing inspiration from them.

Linda Pace presented Ajaya with three drawings from her dream of an enchanted city – an alluring citadel of red, pink, and purple minarets seen from afar at the end of a winding path. The Emerald City comes to mind as a likely subconscious inspiration, as does the question of the afterlife.

Less than two months after the visit, Adjaye Pace died.

Adjaye, who was then a promising British architect, recalls that when he received these sketches, he was very puzzled. It was something like a dense poem, a deep reflection on everything she wanted to have.

Before dying of cancer, Linda Pace shared her sketch with British-Ghanaian architect David Adjaye, commissioning him to design a red building to house her collection of contemporary art. In line with her latest instructions, the foundation that bears her name and oversees her collection has raised donations to fund the $ 15 million project, which also includes a one-acre green space and studio, an auxiliary exhibition area.

Adjaye said in a statement that Linda Pace had a clear vision of how the institution should be an inspiring space for the community and interact with its surroundings, drawing visitors to a jewel-like structure and connecting to the San Antonio landscape.

Two-thirds of the interior is dedicated to exhibition galleries featuring paintings, sculptures, installations, and video works by artists such as Jennifer Steinkamp, ​​Kiki Smith, Do Ho Suh, and Wangechi Mutu from the Pace collection.

The institution is presenting its first three exhibitions: Waking Dream (until 2022), a combination of contemporary pieces that highlight the collection’s core values, as well as works by Pace and other San Antonio artists; Isaac Julien: Playtime (until August 2020), 2014 immersive video installation dedicated to the theme of global capital; and Jewels in Concrete (through April 2020), inspired by a dream Pace recounted in her bio.

At first glance, the Adjaye building bears little resemblance to Pace’s drawings, except for the red concrete façade, the hinged roofline, and the sense of upward movement.

However, inside there is the idea of ​​a ring road – if not literally a yellow brick road, then rather a path into magic and the unknown – leading visitors from the shaded reception area on the ground floor is a bright second the story of angular ceilings, high and panoramic windows and large galleries, where most of the art lives.

The building is small by museum standards, but Adjaye has created a space that appears (thanks in part to a biconvex base) to float above its surroundings, thinned by the special quality of light it allows – in his own words, a small temple of art.

The $ 16 million free to visitors museum will feature over forty pieces from Pace’s highly personal art collection, many of which are large-scale and breathtaking. So far, public expectation proves that Pace’s dream vision is prophetic.

The story of Linda Pace

Daughter of Margaret Bosshardt, whose family once owned the Pearl Brewery, and David Pace, who founded Pace Foods in 1947, Linda Pace grew up atop San Antonio society in the mid-twentieth century.

In her book Dreaming Red: Creating ArtPace, she paints a picture of a family strained by money and tradition, where a socialite often clashes with a master father who spent weekends experimenting with salsa in his jalapeno garden.

Linda Pace dropped out to marry her hometown lover, Christopher “Keith” Goldsbury. She writes about sitting at home after their wedding and doing nothing but writing thank-you notes, wondering, “Is this all there is?”

In many ways, the true story of Linda Pace began at age 42, when her divorce from Goldsbury (they had two children, both have already died) and the sale of a stake in the family business forced her to abandon her traditional parenting scenario.

Pace wrote that abandoning other people’s ideas about the fairy tale and finding her own path was a radical, unconventional act that shook her to the core. The only clues to where she was heading were found in my nightly dreams.

Pace became a woman writer herself, improvising a new script inspired by influences such as Houston’s art-world great lady Dominique de Menil; post-Freudian philosophy of dream symbolism by Carl Jung; and a variety of internationally renowned artists, whose studio practices she tried and shared through ArtPace, an art residency program she founded in San Antonio in 1993.

Renowned British video artist Isaac Julien, the main subject of the Ruby City collection, calls ArtPace “one of the most important art residences in the United States.” The program has transformed the San Antonio art community by forging strong ties between global art stars, renowned curators from around the world, and a local talent pool.

ArtPace-supported artists include famous names such as Julien, Mona Khartum, Glenn Ligon, and Trevor Paglen, as well as an almost exhaustive list of famous Texas artists, from Jesse Amado to Mel Zeigler.

Although her friends say she was an introvert, Pace saw her as a liaison between artists and dreamers, with a focus on women and women from historically underrepresented groups. Catherine Kanjo, director and CEO of the San Diego Museum of Contemporary Art and trustee of the Linda Pace Foundation, which oversees Ruby City, recalls how Pace held meetings of the art world at her other London, New York and Aspen homes that lasted a long time deep in the night.

Likewise, O’Connor fondly recalls Pace’s bustling but welcoming apartment in downtown San Antonio on Camp Street, where she always kept a Quesadilla station in the kitchen (including several varieties of piquant sauce for her family) for visitors who need to have a quick bite to eat.

For artists, the generosity of the ArtPace scholarships, not to mention Pace’s purchasing power as a collector, could be a godsend. But the depth of her devotion to them surpassed the traditional role of patronage.

Julien, whose ArtPace residency in 1999 led to a close friendship with Pace, said that since Linda actually made art herself, this meant that she fully understood the artist’s quest, as well as his desires and demands. Later he will introduce Ajay to Linda Pace and travel with the architect to San Antonio, where he will visit the site in May 2007.

During this trip, Ajaye also visited the San Antonio Missions. There, he was fascinated by the quality of light through the colonnades and the idea of ​​a walking path as a meditation tool. He was able to show Peyss the initial sketches of his design for the museum before her death, although construction, partly delayed due to the economic downturn, will not begin until 2017.

And Ruby City isn’t completely finished. Over the next few years, an amphitheater will be built that will connect the museum’s sculpture garden with the adjacent San Pedro Bay. Ajaye said during a public appearance in San Antonio earlier this year that when this is completed, the public nature of the project would be fully disclosed.

Linda Pace was convinced that art is a vital social force.

As an artist, she revealed the symbolic power of everyday images and objects in her drawings and assemblies. As a collector, she has amassed hundreds of contemporary art pieces in a personal, expressive collection, now managed by the Linda Pace Foundation, founded in 2003.

The Foundation continues to acquire works that reflect Linda’s feminist sensitivity, social issues, and aspects of spirituality and beauty.

London-based contemporary filmmaker Isaac Julien, who met Pace during his 1999 residency at Artpace, said Pace would be remembered as an artist’s collector. Linda was not only the patroness of the arts and individual artists but also the artist herself.

In 2005, Pace built Chris Park, a one-acre public green space in San Antonio, in honor of his son, who died in 1997. The park features a rhythmic arrangement of lush foliage, inviting paths, seating areas, playgrounds, and, most importantly, art encounters.

Respected contemporary artist Teresita Fernandez has created visual experiences in the park that reflect the potential of everyday phenomena. Privately owned by the Linda Pace Foundation and open to the public, Chris Park reaffirms Pace’s visionary commitment to building community through gifts, the promotion of the arts, and the promotion of education.

The Thinking Man of the British Graffiti Movement