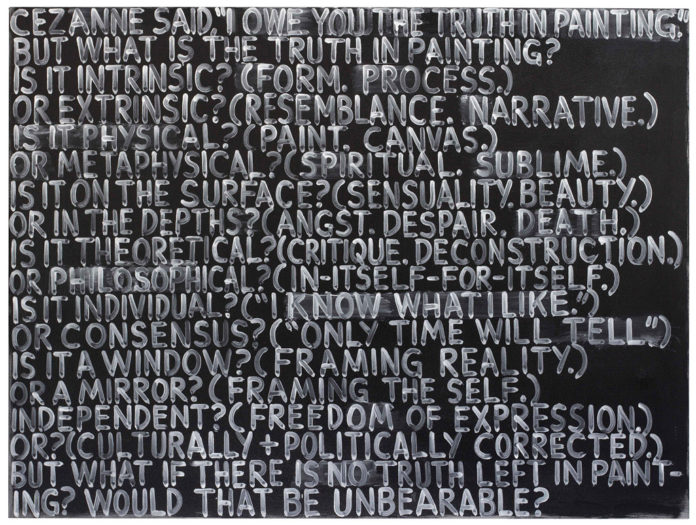 Having long ago established himself as a pioneering conceptual artist, Mel Bochner took a detour in the early 1990s and began painting works in which words constituted the sole image. Was this an extension of his earlier practice? Yet another kind of exercise in blending philosophy and art? Or was it something less profound—perhaps even a bit of a prank? In “Voices” at Peter Freeman Gallery, this uncertain tension remains at the heart of Bochner’s practice.

The first of several questions in the black-and-white painting Cezanne Said (2016) comes after a quotation: CEZANNE SAID, “I OWE YOU THE TRUTH IN PAINTING.” BUT WHAT IS THE TRUTH IN PAINTING?They are the first words you see entering the exhibition. Call it Bochner’s opening salvo. Or, rather, those of a character Bochner inhabits. Either way we’re left with the words and their nihilistic underpinnings.

Language Is Not Transparent (2016) may offer another clue. Here the words of the title, painted repeatedly one over the other, blur the phrase itself to the point that it renders meaning in a sort of visual onomatopoeia—a kind of visceral sense. This motif is repeated across several works in the show, all painted in the past two years. In each one, a different word, phrase, or platitude is “obliterated into a palimpsest of illegibility,” as Jeremy Sigler writes in his catalogue essay.

In a 2006 interview with the Brooklyn Rail   ’s Phong Bui, Bochner offered a glimpse into his relationship with language. Commenting on how people read his paintings, he said that “a work of art lives by being continuously misinterpreted.” So how then could one interpret, or misinterpret, Bochner’s paintings?

We know that language is not to be trusted. Perhaps this is the paradoxical “truth” to these paintings. Simply put, truth—in words, paintings, and by extension, their interpretations—is simply a construct.

A FART, A FUCK, A RAT’S ASS—all terms that could be prefixed by the words “I don’t give…”—make up the composition of A Fart… (2016). Here Bochner’s voice of dissent rings loud. But what that voice specifically refers to is less clear. One possible answer might be found in the last lines of Cezanne Said: BUT WHAT IF THERE IS NO TRUTH LEFT IN PAINT-ING? WOULD THAT BE UNBEARABLE?

The implication of these words could be hard to swallow. Bochner, however, seems to be having a grand time, regardless of the absence of deeper meaning. Though this too could be further misinterpretation.

Here’s another interpretation: Bochner, agonizing over what Sigler describes as his “debilitated existential state of alienation,” has managed to fight off ennui, at least enough to produce the vivid canvasses that currently fill Peter Freeman Gallery. Having done so, we are left with the red, green, yellow, and black blueprints of this inner turmoil.

One last work stands out from the rest: It only contains a single painted word—ZILCH.