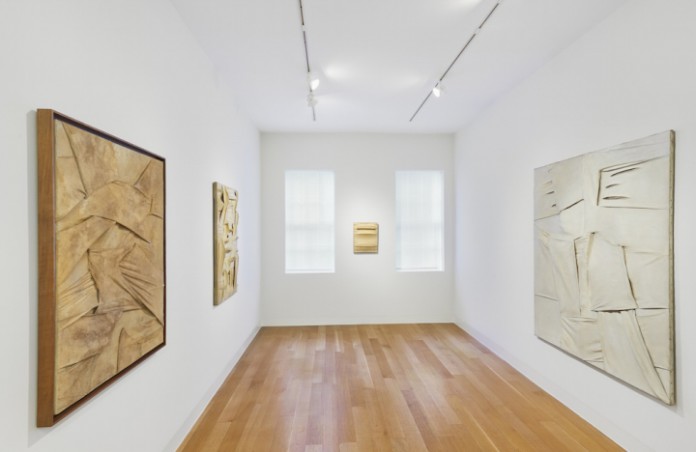 Salvatore Scarpitta’s imagination was wild and full of high jinks. It is one reason why the art world has never known what to do with him.

Salvatore Scarpitta (1919–2007), who was bigger than life, had a career unlike anyone else’s. As Faye Hirsch adroitly pointed out in areview in Art in America (October 2011), his “‘trajectory’ was quite unusual and may well have doomed him to the lot of splendid anomaly.” No matter how much lip service it pays to freedom, the art world has always been antagonistic towards incongruity and difference, and, in that regard, isn’t so different from the rest of America. It prefers stylistic consistency, sanctioned subject matter, and a palatable level of pretension — anything that proves the death of the imagination, which is a necessary component of capitalism.

Scarpitta’s imagination was wild and full of high jinks. It is one reason why the art world has never known what to do with him. There have been a number of theories advanced as to why Scarpitta, whose art underwent a series of significant changes, has always been regarded as an outlier. The one that seems to me the most telling is that his work was never American enough, a sign of the nationalist current running through the art world that it has never owned up to.

Scarpitta’s outlier status has deep biographical roots. He was born in New York to immigrant parents (a Sicilian father and Russian-Polish mother), and raised in Los Angeles. In 1936, at the age of 17, he moved to Italy, at first Palermo and then Rome, where he studied art at the Accademia di Belle Arti until 1940. After the start of World War II, he was placed under surveillance in a small town north of Rome, from which he escaped in 1943, when he joined a resistance group made up of partisans and escaped prisoners. By this time, he was in his mid-twenties, an Italian-American married to Italian Jew, and using the name of a dead British soldier to get around the countryside. In 1944, he joined the United States Army. Is it any wonder that he didn’t fit in? He was born an outsider, lived outside of America, and realized that assimilation would exact a high price; he would have to forget where he came from, as Andy Warhol often pretended to do. Of course, he was also an outsider in Italy because he was, as he told Paul Cummings in an interview for the Archives of American Art (1975), a “half breed, of mixed blood.”

Living in postwar Italy, Scarpitta was friends with Alberto Burri, Lucio Fontana, and Piero Manzoni. In Rome between 1957 and ’59, he shared a studio with Cy Twombly. The works in the exhibitionSalvador Scarpitta 1956 – 1964 at Luxembourg & Dayan (October 13 – December 23, 2016) mark the beginning of the trajectory of his career. In these early works, comparisons are often made to his friends Burri, Fontana, and Manzoni, without sufficiently emphasizing the differences or, equally badly, simplifying the differences: Burri’s work is about wounds and Scarpitta’s work is about healing. While his use of bandages lends itself to this reading, I think it becomes too reductive. Are they bandages or swaddling or, to my mind, both — birth and death wrapped together into one portable thing, at once ungainly and elegant. Don’t we live between both, carrying aspects of each? Don’t these early works prefigure the sleds he began making in the 1970s from things he found on the streets of New York and wrapped in rawhide? Aren’t his race cars— the first of which he built in the early 1960s — a metaphor for trying to outrace death, knowing that you can’t? Don’t race cars go round and round in circles, stuck in whatever loop they are confined to?

In “Mail Box” (1960), which is wrapped in red bandages with a noticeable slit stretching across the middle of the piece, isn’t he suggesting that we are always trying to send a message that never arrives? Or perhaps we are the mail box to which messages that we never comprehend are sent?

More importantly, within this early group of works, one senses his restlessness. What are we to make of “Racer” (1959), which introduces the artist’s lifelong interest in racing cars and speed, a continuation, as well as a rupture, of Futurism? It is a romantic metaphor of the artist courting chaos and death, which isn’t surprising. What’s surprising is that he doesn’t glorify it the way the Futurists did. Isn’t he always, as Frank O’Hara titled his poem, “A Step Away from Them,” meaning Jackson Pollock and Bunny Lang, who are dead? In “Tishimango (for Franz Kline)” (1964), the woven straps and metal hook become a self-contained contradiction. While the straps hold everything together, the metal hook threatens to rip everything apart. The dirty white surface is scarred and punctured.

Formally, we can talk about the fact that Scarpitta made hybrid objects that were neither paintings nor sculpture, and thus helped define his time. We can talk about the affinities his work had with the advanced and radical art of his peers. All of this and more are in these early works, and many others have discussed these things in great detail. But what stays fresh is not its formal strengths; they simply shape and buttress what is there, which is the depth of feeling he put into each work. He took the macho bravado we associate with Futurism and turned it upside down, showing its vulnerability. He never became a Pop artist, Color Field painter, or a Minimalist, which is to his credit. Isn’t his independence something to be honored? Like Cy Twombly, his studio mate in Rome, Scarpitta went his own way. Did doing so mean he was doomed to become a “splendid anomaly,” or was his understanding of his outsider status, which he embraced throughout his career, a gift that we have yet to receive?