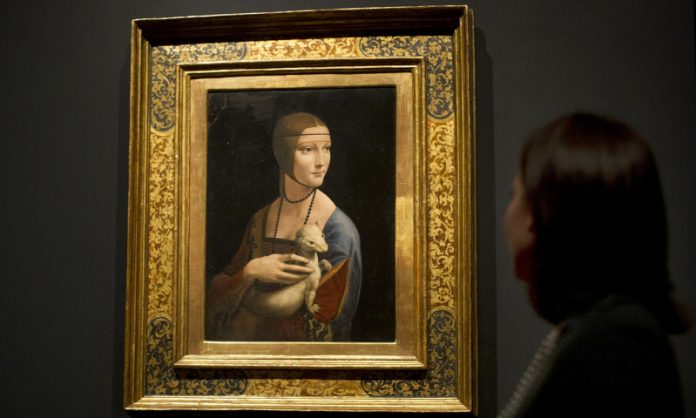 “Like Noah’s Ark”: The Czartoryski collection has returned to Krakow not without a scandal. It ranges from rare parchments and ancient Egyptian mummies to paintings including the Rembrandt landscape and Leonardo da Vinci’s priceless portrait. It has been collected by generations of Polish nobility and is now one of the most intriguing and diverse collections in Europe. Since December 2019, it has been re-opened to the public in the renovated Museum in Krakow.

The fate of the Czartoryski collection has become a mirror of Polish history. It began to be collected as a replacement for the national museum at a time when Polish independence was under threat. It was brought to Paris when Poland disappeared from the map of Europe in the 19th century. The fragments of the collection were later captured by the Nazis and then by the Soviets.

The colourful history is still unfinished, and there is now a heated debate over a deal worth 100 million euros. For this amount the Polish state bought the collection from the heir to the Chartory family, who grew up in Spain and does not know a word of Polish.

However, the collection is being exhibited again in Krakow – after a ten-year break when the Czartoryski Museum was closed for renovation and expansion. During this time, the exhibition space has been renovated and doubled, so that visitors can now see on two floors a unique cross-section of European culture and history and the place of Poland in them. “It’s like Noah’s Ark. It had to go through difficult periods of obstacles and be preserved for the future, when we regain our independence,” said Andrzej Szczerski, director of the National Museum in Krakow, where the entire collection of the Czartoryski has been included since its purchase in 2016.

The collection includes 86 thousand items and a library of 250 thousand books and manuscripts, many of which are of key historical importance.

The collection began to be collected by Princess Isabella of Czartoryski at the dawn of the XIX century. She also organized an exhibition at her family estate. “My homeland, I could not save you, let me at least immortalize you,” she wrote in the preamble to the meeting.

Leonardo da Vinci’s “Lady with an Ermine”, one of the four female portraits of the master, occupies an honorable place in the exhibition. The painting, dated around 1490, shows Cecilia Gallerani, the young beloved of the Duke Ludovico Sforza of Milan, the painter’s patron.

The portrait was purchased in Rome in 1798 by Prince Adam Jerzy of Czartoria, son of Isabella and Minister of Foreign Affairs under Russian Emperor Alexander I. After the partition of Poland became a critic of Russia and lived until the end of his life in the mansion Lambert in Paris, where for decades was placed a collection of works of art. It returned to Poland in 1876 and was exhibited in Krakow, where it testified to the country’s mixed history. Hans Frank, governor of Krakow under the Nazis, took Leonardo’s work and a number of other works when the Nazis left the city. He was arrested at the end of the war by the allies who returned the painting to Krakow. Now there is a separate hall under it, where you can see the work of the Renaissance genius without crowds of tourists.
The exhibition also features rich medieval ivory carvings, peacocks made of precious stones, vases and tapestries, an extensive collection of Polish royal portraits, armour and memorabilia dating back centuries.
Adam Karol Czartoryski, who was born in Seville shortly after his father fled Poland in 1938, inherited the collection as Adam Jerzy’s great-grandson. In 2016, he made an agreement with the Polish government to sell his treasure for 100 million euros. The buyer was represented by the Minister of Culture Piotr Glinski from the ruling party “Law and Justice”. In June, the official sent the prince an offer to buy the collection, but to sell it, the aristocrat needed the approval of his fund.

Art historian Marian Volsky, who then headed the board of the foundation, said that the state has no reason to pay so much for the collection, which has already been banned from the country. “I did not want in any way to be involved in this fraud,” he said, resigning with his deputy. – This is the crossroads of two major sins: greed and pride. The hastily convened new council quickly signed the deal.

Wolski said Czartoryski initially wanted to transfer the amount to his personal account, but the Polish government wanted to pay the fund to use the money to fund national cultural initiatives in the future. The money was transferred to Liechtenstein, which added scepticism to the deal’s critics.

Maciej Radziwil, the current head of the board and member of the Czartoryski family, stated that the prince had not used the money for personal purposes and that the fund could account for every cent. “It is a pity that this great achievement was spoilt by the scandal. The Minister of Culture in Britain would probably have been given a royal medal for buying such a collection for only 5% of its value,” he said.

Andrzej Szczerski calmed critics by saying it was “a historic and fantastic moment”. According to him, the collection is being exhibited again, and another important mystery remains to be solved: the fate of Raphael’s Portrait of a Young Man. He was kidnapped by Hans Franck along with Leonardo’s work, but was never found after the war. Nevertheless, Shersky informed that there are some people in the art world who believe that they traced the painting to a private collection.

The director of the museum refused to provide more information, but added that the Polish state is very interested in receiving the work and will start taking steps if it can confirm the information. He also called on the family, which, in his opinion, owns the painting, to return it voluntarily. “Someone has to make a moral decision, admit that his ancestors took the work and return it,” he said.