The Victoria and Albert Museum is known as the V&A. It is the British Museum that houses the world’s largest collection of decorative arts located in South Kensington, London, close to the Science Museum and the Natural History Museum. V&A museum dates back to 1852.

Victoria & Albert museum mainly housed a collection of arts and crafts that were on display at the Crystal Palace, which housed the Great Exhibition of 1851. The items were donated to the South Kensington Museum and re-exhibited in 1857 as part of the government’s efforts to improve taste and knowledge among those related to British produce. The collection soon outgrew. And plans for a new museum were drawn up.

The museum was renamed the Victoria & Albert Museum in 1899. Then, Queen Victoria laid the cornerstone of the current building, designed by Sir Aston Webb. This building was opened in 1909. Since then, the premises of the museum have been modernized and expanded, in part at the expense of the adjacent buildings.

The Victoria and Albert Museum houses extensive paintings of European sculpture, ceramics (including porcelain and other pottery), furniture, metalwork, jewelry, and textiles from the early Middle Ages to the present day. It includes French furniture, porcelain, and other art objects bequeathed by Jones; Schreiber’s group of English pottery, enamel, and glass; the Curry collection containing fine Italian and French weapons and armor; and 18th-century German porcelain, which is part of the Murray collection.

There are strong Indian art groups that got an early boost with the acquisition of materials from the East India Company museum after it closed in 1858. East Asian artwork includes remarkable Chinese ceramics, jade, and sculpture from the Yumorfopoulos collection. The V & A museum also houses a national collection of British watercolors, miniatures, prints, and drawings, including an outstanding group of works by John Constable.

The sculptures of the Italian Renaissance and Baroque are some of the best outside Italy. In 2014, the V&A museum launched a so-called rapid response program for the first time, in which the museum quickly acquired items from important moments in recent history.

Its parts include a pussy hat, a knitted pink hat worn by 2017 Women’s March, and an Xbox Adaptive Controller, a device released in 2018 to increase the availability of video games. The V&A museum also houses the National Art Library.

‘All Will Be Well: Children’s Rainbows from Lockdown’ display 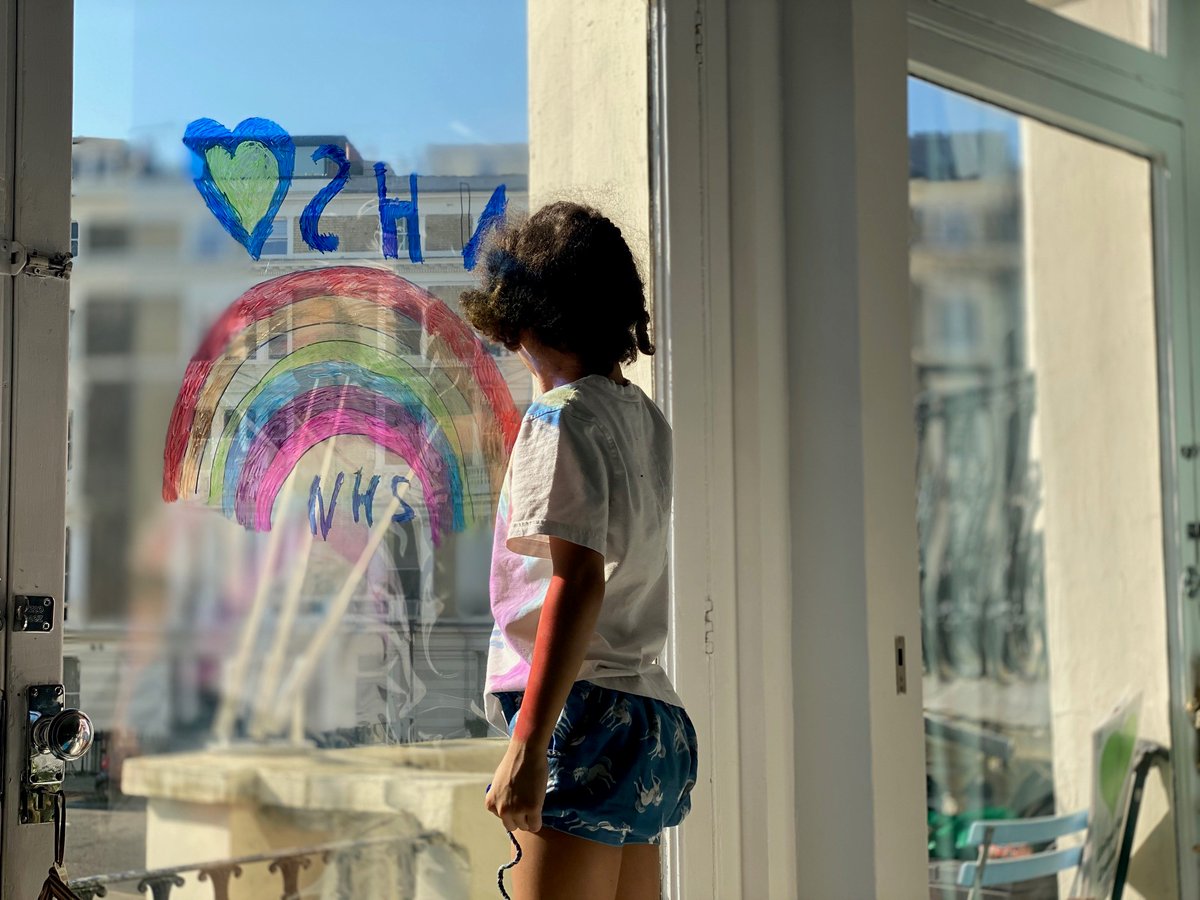 Earlier this year, the Victoria and Albert Museum has made a nationwide call for the rainbow made by children during the pandemic. All Will Be Well: Children’s Rainbows from Lockdown features a large-scale installation of these joyous works of art, paired with quotes from young authors, to once again recall this incredibly powerful moment.

These homemade rainbows have become an international signal of hope and have revived street landscapes around the world during isolation. This concept was pioneered by families from the Lombardy region of Italy, accompanied by the phrase “Andrà Tutto Bene,” or “Everything will be fine,” reflecting a moment in time when going to school, playing with friends, visiting family, or leaving home was not possible.

Making the rainbow was an opportunity to be creative and a way to feel part of a powerful collective movement and – especially for children living in the UK – a way to show their appreciation for the NHS.

On Point: Royal Academy of Dance at 100

On Point: 100 Years of the Royal Academy of Dance celebrates the centenary of the Royal Academy of Dance (RAD), one of the world’s leading dance education and training organizations. With over 60 original objects, including costumes, drawings, and posters, as well as a wealth of photographs and film footage, this display traces the roots and influence of the prestigious dance academy from its founding in 1920 to pioneering work aimed at the dance that has become available to everyone all today.

The exhibition, organized by V&A Museum in collaboration with RAD, explores the history of the Academy. It includes the influence of such important people as Anna Pavlova, Rudolf Nureyev, and other stars of the dance world. They became presidents of the Academy and promoted its work.

The first president of RAD was the lady Adeline Genet, who brought respectability to the then highly questionable dance career. 15 years after the Academy was founded, Zhenya received a Royal Charter and was replaced by ballerinas Margot Fontaine, Antoinette Sibley, and now Darcy Bassel.

The show will feature presidential costumes, including Darcy Bussell’s dress for Kenneth MacMillan’s The Prince of the Pagodas, a role that earned her public acclaim, and costume designs for Adeline Jené, Tamara Karsavina, and Margot Fontaine.

Other highlights include a 1942 harlequin sculpture by Alfred Gilbert, the sculptor behind the famous statue of Eros in London’s Piccadilly Circus; a unique 1950s pamphlet “Ballet Exercises for Athletes” with original drawings by the illustrator Punch Fougasse, famous for his World War II posters “Careless Conversation Costs Lives”; and the shoes worn by Dame Darcy Bussell at her farewell performance as a member of the Royal Ballet (2007).

V&A’s theater and performance department is home to one of the largest dance collections in Europe, including many items that were once owned by RAD. Drawing on the combined resources and archives of both institutions, this exhibition shows how RAD helped establish British dance and continues to advocate dance as an inclusive rather than an elite art form worldwide.

About the Filthy Lucre installation

The original Peacock Room, located at 49 Princes Gate in London, was intended to showcase the porcelain collection of Frederick Richards Leyland (1831-92), a British shipping magnate. The artist James Abbott McNeill Whistler (1834–1903) made it infamous by decorating it far beyond the directions of his friend and patron.

Whistler was invited to consult on the room’s color scheme. While Leyland was away from London, he redecorated the entire room in vibrant blues and iridescent greens and golds paired with peacocks.

Whistler created an aesthetic masterpiece of interior design through his extravagance, but Leyland refused to pay the full Whistler royalties. The controversy, fueled by their controversial personalities, spread across the London tabloids, turning the once great friends into enemies.

In 1904, the American art collector and industrialist Charles Lang Freer bought the room and sent it to America. He eventually found a home at the Freer Art Gallery in Washington, DC.

Waterston’s installation is a disturbing reimagining of Whistler’s famous Peacock Room, inspired by the tension between art and money, ego, and patronage. Filthy Lucre faithfully recreates each of the individual elements of the Peacock Room with a twist, drawing parallels between the economic inequalities of the Victorian era and today.

By reproducing, accentuating, and distorting the opulent interior of Whistler’s masterpiece, Waterston transforms the room into an uneasy experience of destruction and perverse excess, revealing magnificent ruins crumbling under the weight of material decline and the egos of those who helped create it.

Curious Alice invites viewers to fall down a rabbit hole and embark on a dizzying journey into Wonderland through a playful dimension of virtual reality (VR). This new virtual reality experience is the result of an innovative partnership between V&A and HTC Vive Arts, created by immersive gaming studio PRELOADED and featuring original artwork by Icelandic illustrator Kristjana S. Williams.

The experience is a fully immersive interactive reimagining of Wonderland. It is dedicated to one of the most iconic and inspiring stories of all time – the subject of the major 2021 V&A exhibition, Alice: Curiouser and Curiouser.

From rabbit holes to psychedelic mushrooms, from flamingos to hedgehogs, Wonderland is the perfect world to explore in virtual reality. Curious Alice encourages viewers to reward their curiosity by navigating the fantasy landscape, interacting with famous characters in the book, and completing a number of curious tasks.

Race against the clock to capture the White Rabbit’s missing glove; solve the dizzying riddles of the Caterpillar; defeat the Queen of Hearts in a curious croquet game.

About the Epic Iran exhibition

Epic Iran explores 5,000 years of Iranian art, design, and culture, bringing together over 300 items from ancient, Islamic, and modern Iran.

Iran was home to one of the greatest historical civilizations. Unfortunately, its monumental artistic achievements remain unknown.

Epic Iran explores this civilization and the country’s journey into the 21st century, from the earliest known scripts – marking the beginning of Iranian history – to the 1979 revolution and beyond. From sculpture, ceramics, and carpets to textiles, photography, and film, the works in this exhibition reflect the country’s vibrant historical culture, architectural splendor, an abundance of myths, poetry, and traditions that have been central to Iranian identity for millennia, and evolving, self-renewing culture is evident today.

Epic Iran consists of ten breathtakingly designed sections that will take visitors to a city with gates, gardens, a palace, and a library.

About the Bags: Inside Out exhibition

Bags: Inside Out is the UK’s largest trade fair for the best accessories. An exclusive look at the world of factory and atelier, this exhibition explores our long-standing passion for bags, from designer bags to messenger boxes, toiletries, and military backpacks.

The bags are bold statements to the outside world while hiding our most precious possessions. The exhibition features some 300 items, ranging in size from tiny fingertip wallets to lavish travel chests, and explores the function, status, and craftsmanship of these highly coveted items from the 16th century to the present day.